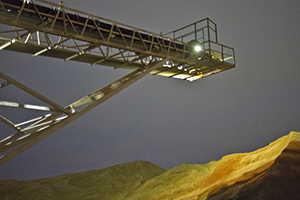 Chris Faust is mostly known for his large-scale images of vernacular landscapes. His work has been exhibited at, and collected by, the Walker Art center, The Minneapolis Institute of Art, San Francisco Museum of Modern Art, and other regional galleries. He has received McKnight, Graham, Bush and Minnesota State Arts Board Grants.

Ongoing projects he is embarking on are; An extensive re photographic study of the original Bosse photographs of the Mississippi river from the 1880’s, documenting the extraction landscapes from the Bakken Oil Field in western ND, continuing photographic studies of night landscapes. He has published a Monograph of his work entitled “Nocturnes” though the University of Minnesota Press in 2007. He has appeared in the TPT production “Minnesota Originals” and numerous times on MPR. 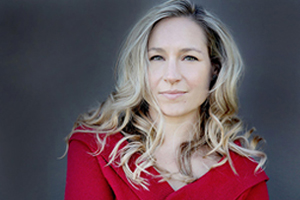 Jocelyn Hagen composes music that has been described as “simply magical” (Fanfare Magazine) and “dramatic and deeply moving” (Star Tribune, Minneapolis/St. Paul). She is a pioneer in the field of composition, pushing the expectations of musicians and audiences with large-scale multimedia works, electro-acoustic music, dance, opera, and publishing. Her first forays into composition were via songwriting, still very evident in her work. The majority of her compositions are for the voice: solo, chamber and choral. Her melodic music is rhythmically driven and texturally complex, rich in color and deeply heartfelt.

In 2019, choirs and orchestras across the country are premiering her multimedia symphony The Notebooks of Leonardo da Vinci that includes video projections created by a team of visual artists, highlighting da Vinci’s spectacular drawings, inventions, and texts. Hagen describes her process of composing for choir, orchestra and film simultaneously in a Tedx Talk given at the Walker Art Center in Minneapolis, now available on YouTube. Her dance opera collaboration with choreographer Penelope Freeh, Test Pilot, received the 2017 American Prize in the musical theater/opera division as well as a Sage Award for “Outstanding Design.” The panel declared the work “a tour de force of originality.”

In 2013 Hagen released an EP entitled MASHUP, in which she performs Debussy’s “Doctor Gradus ad Parnassum” while singing Ed Sheeran’s “The A Team.” She is also one half of the band Nation, an a cappella duo with composer/performer Timothy C. Takach, and together they perform and serve as clinicians for choirs from all over the world.

Hagen’s commissions include Conspirare, the Minnesota Opera, the Minnesota Orchestra, the American Choral Directors Associations of Minnesota, Georgia, Connecticut and Texas, the North Dakota Music Teachers Association, Cantus, the Boston Brass, the Metropolitan Symphony Orchestra and the St. Olaf Band, among many others. Her work is independently published through JH Music, as well as through Graphite Publishing, G. Schirmer, Fred Bock Music Publishing, Santa Barbara Music Publishing and Boosey and Hawkes. 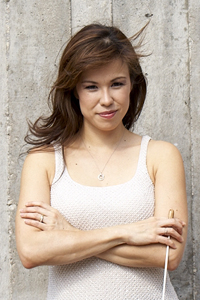 Noted in the New York Times as part of "a new wave of female conductors in their late 20's through early 40's", Sarah Hicks's versatile and vibrant musicianship has secured her place in "the next generation of American conductors". Since October of 2009 she has been Principal Conductor of Live at Orchestra Hall with the Minnesota Orchestra where she has been instrumental in creating new Pops productions while also heading the innovative classical series, "Inside the Classics".  Throughout her career she has collaborated with diverse artists, from Hilary Hahn and Dmitiri Hvorostovsky to Rufus Wainwright and Smokey Robinson; during the summer of 2011 she was on a two-month tour with Sting as conductor of the final leg of his Symphonicities Tour. Her recording with hip hop artist Dessa and the Minnesota Orchestra will be released on November 8, 2019 on the Doomtree label.

A highly sought-after guest conductor, particularly in the live to concert film genre, Ms. Hicks has performed extensively both in the States and abroad. She led the Los Angeles Philharmonic in July 4th concerts at the Hollywood Bowl in 2012, 2013 and 2015. 2019-20 highlights include returns to Dallas and San Diego as well as a debut with the WDR Orchestra Köln.

Ms. Hicks's past affiliations include positions with the North Carolina Symphony, Richmond Symphony and Florida Philharmonic.  She was on faculty of the Curtis Institute of Music from 2000 to 2005 and continued her affiliation as Staff Conductor until 2015.  Her opera appearances have included Verdi's Aïda with the East Slovak State Opera Theater, Poulenc's Dialogues des Carmelites and Handel's Alcina with the Curtis Opera Studio and a semi-staged production of Humperdinck's Hänsel und Gretel with the Minnesota Orchestra. 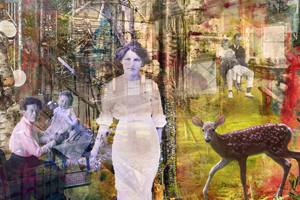 Janet Millstein is a mixed media printmaker whose work merges photography with digital and traditional printmaking techniques. Her work is influenced by the natural world of flora and fauna; the wild, dark beauty of the Adirondack Mountains is an ongoing source of inspiration. Her use of rich, brightly saturated colors belie themes of turmoil, abandonment, and possible danger in the everyday world. While her narratives suggest these themes, interpretation is left to the viewer for how these visual stories may play out. Her personal view is through at least one rose-colored lens.
Millstein uses both her iPhone and a digital SLR to capture the world around her, often literally stopping in her tracks to document creatures, flowers, landscapes and abstractions. After cataloging and repeatedly viewing these images, ideas emerge for combinations with her printmaking work. Either as an organic response to a monotype or in concert with an ongoing narrative, Millstein uses photo-imaging techniques to layer, manipulate and edit these images adding color, transparency and texture to create her imaginary worlds. Once printed, Millstein hand works her final pieces with pencils, inks, dyes, markers or paint.

A lifelong artist, Millstein divides her time between Lake Placid, NY and northern New Jersey. Her formal art education began as a teenager at the Art Students League of New York. She earned a Bachelor of Fine Arts in Illustration from Parsons School of Design. Before turning to fine art printmaking, Millstein had a corporate career as a graphic designer, art director and creative director. Her work has shown in national and international juried shows and by invitation at galleries throughout the New York tri-state area, and is held in multiple private collections. She is a featured artist in the books Modern Printmaking and Photoshop for Artists, both by Sylvie Covey, and is represented in the Adirondacks by Gallery46 in Lake Placid, NY. In June of 2019, her solo show, Imagined Reflections, opened at the Lake Placid Center for the Arts. For this 8-week show, a collaboration with the Lake Placid-North Elba Historical Society and the Lake Placid Center for the Arts, she created a large body of work using archival glass plate negatives, in combination with her own images, to explore, celebrate and reimagine life in the Adirondacks.

Dale Ricardo Shields is a 2017 winner of The Kennedy Center/Stephen Sondheim Inspirational Teacher Award®, 2017 and 2015 Tony® award nominee for the Excellence in Theatre Education Award and the winner of the 2017 AUDELCO/"VIV" Special Achievement Award.

His extensive professional credits as a Director, Stage manager, and Actor (Broadway, Off-Broadway, Off-Off-Broadway, and Regional) As an actor he has appeared on Saturday Night Live, Another World, Guiding Light, The Cosby Show, and the ITV television series "Special Needs" and commercials and film.

Professor Shields is a member of the Actors Equity Association, Screen Actors Guild, the American Federation of Television and Radio Artists and the American Guild of Musical Artists performance unions and an associate member of the Society of Stage Directors and Choreographers. He holds a B.F.A and M.F.A degree from Ohio University. 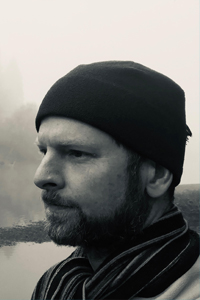 Tim's films have screened at over 70 international film festivals and have been broadcast in 40 countries. He has won best film and audience awards at film festivals for his documentary and narrative films. His feature documentary 4 was released theatrically, won a Gold Plaque at the Chicago HUGO Television Awards, and received nominations at the Banff World Television Festival, the International Documentary Association (IDA) Awards, as well as nominations for two AFI (Australian Film Institute) awards, including Best Documentary Feature. The Destruction of Memory has screened widely internationally including officially for the United Nations. To date it has garnered four film festival awards. Tim has written and directed the short dramas Weird Sisters, Every Other Weekend and I Was Robert Mitchum, and is currently working on a short documentary and a narrative feature. 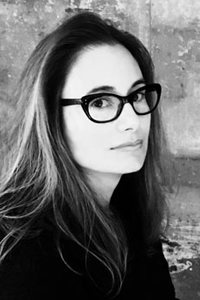 Dana Spiotta is the author of four novels: Innocents and Others, (2016), which won the St. Francis College Literary Prize and was shortlisted for The Los Angeles Times Book Prize; Stone Arabia (2011), which was a National Book Critics Circle Award Finalist in fiction; Eat the Document (2006), which was a National Book Award Finalist in fiction and a recipient of the Rosenthal Foundation Award from the American Academy of Arts and Letters; and Lightning Field (2001). Spiotta was a Guggenheim Fellow, a New York Foundation for the Arts Fellow, and she won the 2008-9 Rome Prize from the American Academy in Rome. In 2017, the American Academy of Arts and Letters awarded her the John Updike Prize in Literature. Spiotta lives in Syracuse and teaches in the Syracuse University MFA program. 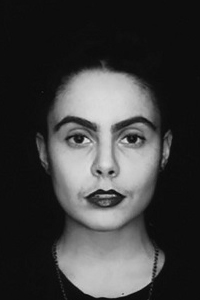 A poet from Brooklyn, where they're working to externalize interior femme landscapes. They are the author of art book Saw Palmettos, on hormones, community, and the brain-time continuum (Container, 2018), and chapbook Which One Is the Bridge (Topside Press, 2015). With ray ferreira and Abigail Lloyd, they coedit Femmescapes, a magazine of queer and trans affinities with femmeness.

Simon “Siem” van der Ven follows these threads through his life: making things, cooking, drawing, sailing, teaching, being a father (the very best work he’s been a part of). He has never let go of the stage in which he learns from his fingertips inward.

Siem’s undergraduate degree is in printmaking with a minor in sculpture from SUNY Potsdam. He worked as a goldsmith and carpenter/builder before becoming an award-winning high school art teacher. Seventeen years in the classroom were interrupted only by a year-long sabbatical in the south of France, where Siem worked in Atelier Buffile and studied painting and critical theory at the Marchutz School. Later, while still teaching, he earned an MFA with a concentration in ceramics and drawing.

Siem has taught as an adjunct professor at the University of Maine Augusta and Unity College. He’s also facilitated various workshops including Haystack Mountain School of Crafts. Siem has been a resident artist at Anderson Ranch in Colorado and Watershed Center for the Ceramic Arts.