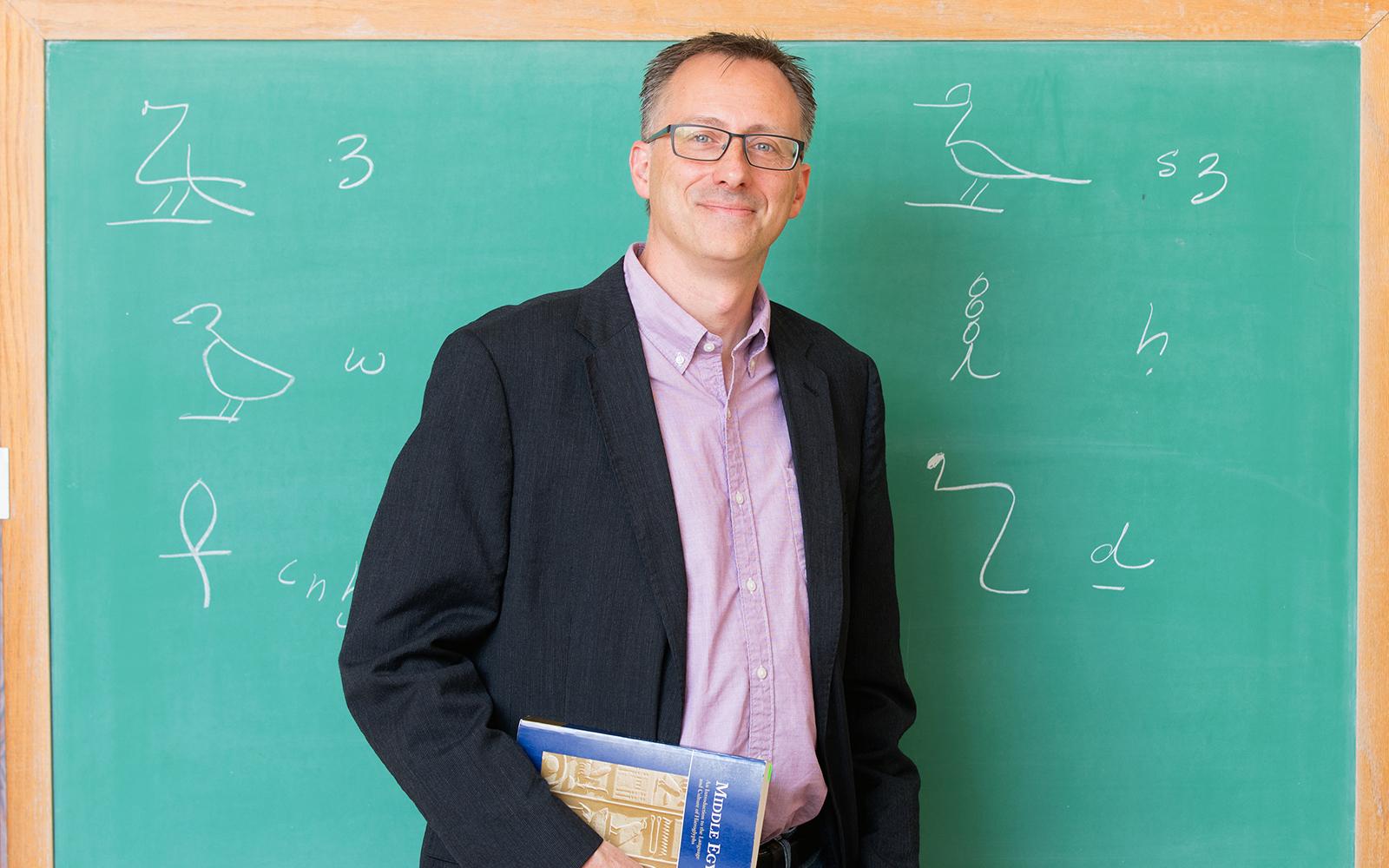 You won’t find opportunities to study Middle Egyptian Hieroglyphs on many campuses, but motivated students need to look no further than SUNY Potsdam history Professor Steven Stannish’s hieroglyphs class. During his 15-year tenure, Stannish has been teaching the intensive course where students develop the skills to read and write the Middle Egyptian Hieroglyphic script—a beautiful written language with about 500 common signs, used predominantly from around 2000 B.C. to 1350 B.C.

“It’s one of the more unique things we offer (here at SUNY Potsdam). This is an extraordinary chance,” Stannish said. "How many universities are there in New York where you can study ancient Egyptian for two years and learn to write hieroglyphs?”

Hieroglyphs 1 to 4 is offered over four consecutive semesters with a progressively deeper examination of the hieroglyphic script. Students interested in the course are required to have taken a foreign language and to have also taken one of Stannish’s history classes in the past. With small class sizes, the course is very student centered and there’s a lot of interchange between the students and the professor.

The first semester of the challenging one-credit class focuses on memorizing some basic signs and words and by the time students get to the third semester—the class that he’s teaching this fall—students focus on sentence-building, using verbs and reading Egyptian stories. “This semester, we’re going to look more at Egyptian literature, the stories the Egyptians told and narrative inscriptions,” Stannish said.

For Stannish, the process has come full circle. As an undergraduate student at the University of Nebraska he took an Egyptian course—similar to the class he teaches now—that influenced his decision to switch his major from modern European history to ancient history. Stannish recalls his own struggles with hieroglyphs as an undergraduate student. At one point, he approached his professor Tom Rinkevich, and asked him how long it would take to comfortably read and understand hieroglyphs. Rinkevich responded, “Well Steve, the first 20 years are the hardest.”

“It took me, to be fair to Tom Rinkevich, about two decades of working with this language before I really felt comfortable with it,” Stannish said.

His hard work paid off and he now mentors SUNY Potsdam students who are trying to learn the hieroglyphic script. “They are uniformly the best students I teach. They are self-motivated, intelligent and open-minded. This is the most amazing thing—some of them have no aspirations to go on in ancient history or archaeology or classics at all. One student was an art major who was an outstanding student and had taken some classes with me before. She was one of the very best Egyptian students I’ve had,” Stannish said.

There are currently 86 undergraduate students majoring in history who will go on to pursue certification as teachers, or seek advanced degrees in historical studies, museum studies and archival training. This fall, 10 faculty members and one teaching assistant will be offering 23 classes and two seminars ranging from the ancient world to the present. Stannish will continue to focus on ancient history as he teaches a course on the ancient Middle East, a senior seminar on the ancient Mediterranean, and his third installment of Middle Egyptian Hieroglyphs.

“I had a very good student just take first year hieroglyphs because she was intrigued by it...She took it for a year and graduated. I met her parents at graduation and the first thing they told me was, ‘Our daughter took us through the Metropolitan Museum of Art and could read some of the inscriptions.’ That was so great,” Stannish said.

Besides Egyptian Hieroglyphs, Stannish also speaks Russian and a little Italian, and he reads and writes in both German and French as well as his native English. “My ancient Greek is ok, and I studied some Aramaic and Quranic Arabic as a Ph.D. student…I sometimes am asked by students, ‘how did you do this?’ I’ve been doing it for 30 years. You go to graduate school for seven to 10 years on average in ancient history, and when your adviser tells you: ‘this year you’re going to learn French,’ it’s not a debatable point,” he said.

“If you were to look at a bibliography in my dissertation or an article that I’m writing right now, you’re going to see a lot of books and articles in French and German. You just can’t ignore material from other major scholarly sources, it would be a major weakness, it would be like going into boxing match with two broken arms,” Stannish said.

Stannish received his bachelor’s degree in history and Russian from the University of Nebraska, before getting his Ph.D. in history, with an emphasis on antiquity, from Miami University in Ohio. His extensive linguistic knowledge has helped him effectively study ancient history and focus on his main areas of interest: religion and philosophy on the one hand, and encounters and interactions between different peoples on the other.