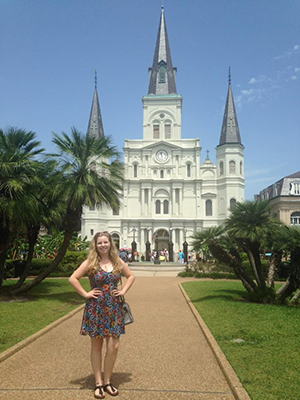 For about five and a half months I was exploring the beauties of Europe. I chose to study at the University of La Rochelle in La Rochelle Ville. The city is located in the southern-west region of France. The university had the option of taking university classes or being in the international class. I chose to be in the international class and I had many different students from different countries. It did take a little time to adjust taking classes in a totally different language but after some time I was more comfortable.

The university had residential housing that I lived in. Unfortunately it was very isolating from most things in town, including where my classes were, but I got acclimated and made the best out of the situation. The town was very active, more during the warmer months. There was a port, and a few beaches that I spent some time at when the weather became nicer. Once spring came around, more shops opened up their doors, restaurants had amazing seafood and the gelato shops were full of people. I went to a few wine bars and drank the local wine from La Rochelle, experiencing what comes from there.

A few months in, I found a job as an Au Pair for a family that lives in La Rochelle. They hired me to speak English with their children. There were two kids, a boy and a girl, ages eleven and eight. They had lived in Miami, Florida the year before and are fluent in English. The mother wanted me to speak English with them so they wouldn’t lose any of it from living in France again. I had a wonderful time playing with them and helping with their homework. I still keep in touch with them and it was hard leaving. That was the most memorable part of my stay in La Rochelle.

I did a lot of traveling. I had two breaks during the semester and decided to make my way to more countries. My first trip was a week in Barcelona, Spain. I saw a lot of architecture of Gaudi and the beautiful sights of Barcelona. The second trip I took was a weekend in Paris. I met one of my previous teachers who was traveling with a group of students. I later went to Rome and Florence, Italy. I ate a lot of pizza and pasta. The last place I visited was Malta. It is a very small country that was beautiful and pure.

My time abroad was an amazing experience. I learned so much about the French language and about myself. Living on my own for the first time and using my French skills to get around. I feel more confident in my French language skills and more knowledgeable about French culture. This will be something that I remember for the rest of my life.