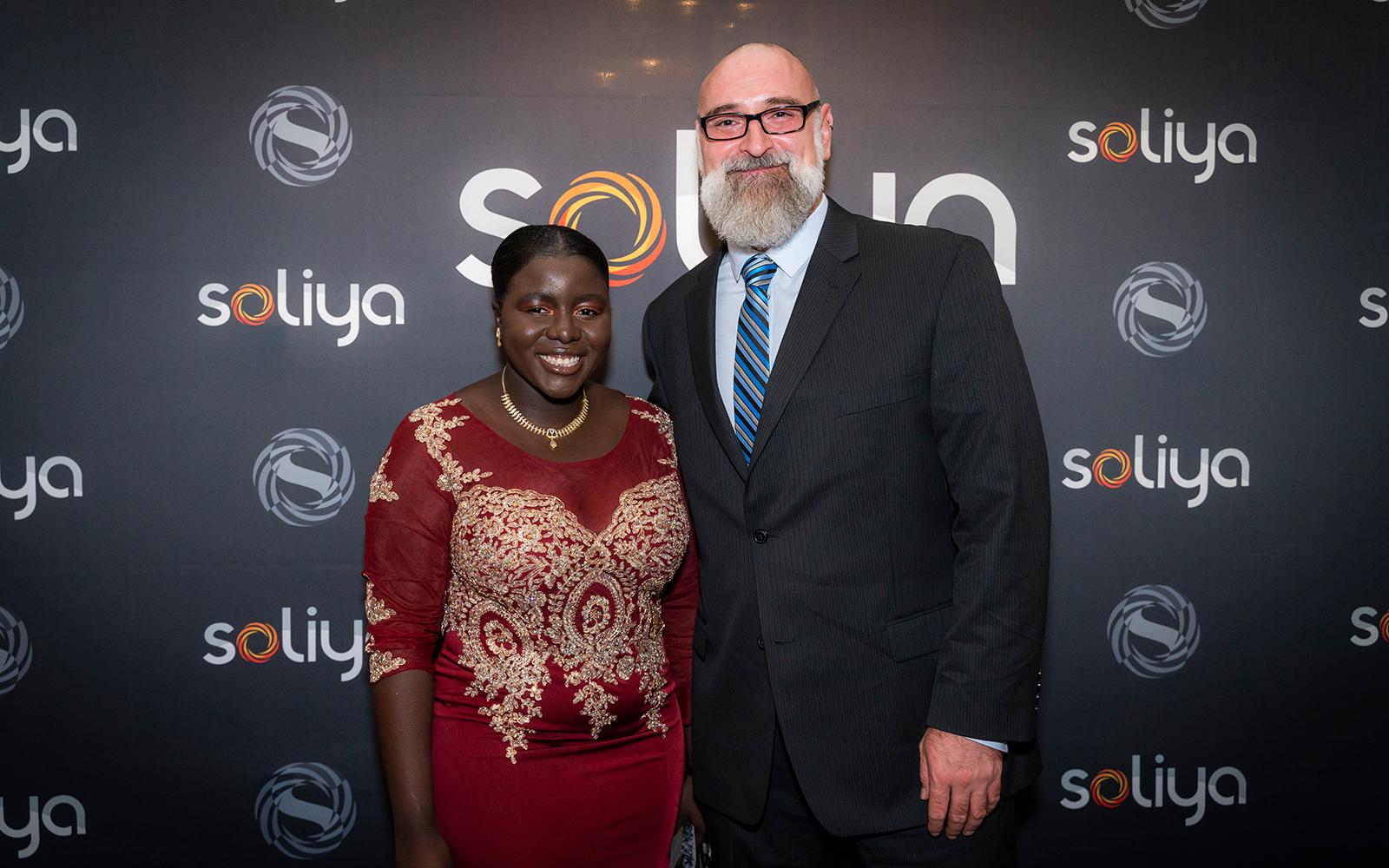 A faculty member and student from SUNY Potsdam’s international studies program were recently honored with the inaugural Community Advocacy Awards from Soliya, an international non-profit that empowers young people to engage with difference constructively.

Dr. Michael J. Popovic, an instructor and coordinator of the College’s international studies program, and Ramatu “Rama” Muhammed ’21, a sophomore from the Bronx, N.Y., were chosen from among hundreds of college faculty and students who are connected with Soliya’s virtual cultural exchange programs each year.

Founded in 2003, Soliya leverages digital technologies to bring together more than 4,000 young people domestically and abroad annually, through online, high-impact roundtable conversations. The organization is built upon the core tenet that everyone's story is worthy of being told—and heard.

Each semester, Popovic uses the Soliya Connect platform to unite his undergraduates with other young people from 60 countries across Europe, North America, the Middle East and North Africa. The weekly face-to-face meetings take place through Soliya’s web conferencing platform, allowing students to engage in dialogue with peers thousands of miles away.

“They discuss a variety of different issues. They discuss the role of news media in politics, U.S. foreign policy, Islamophobia, xenophobia, the role of religion in society—a number of the real hot-button issues that can be touchy in those interactions. The entire program is based on the notion of dialogue. So, this is not that somebody is trying to convince somebody else about what’s right or what’s wrong. The mission is really to try to get to understand the other side,” Popovic said.

As one of his students, Muhammed first got involved with Soliya in one of Popovic’s introductory courses.

“Sooner or later, something that was meant to be solely for school began to influence my social life in partaking in dialogue. I met people from all walks of life, who reminded me of the goodness in humanity and to continue to be openminded on issues that I seem to be indifferent towards or issues I had an opposing view to,” she said.

Following her experience, Muhammed was chosen to be featured in orientation and promotional videos for Soliya. A few months later, Soliya CEO Waidehi Gokhale asked her to share her experiences firsthand in one of the organization’s board meetings.

Popovic’s interest in the Soliya exchange stems in part from his experience being raised in Dubrovnik, Croatia, and witnessing the outbreak of genocide and violence during the volatile breakup of Yugoslavia in the 1990s. Each year, he leads an intensive three-week travel course to his home city, during which students speak to those who lived through the war, including a soldier and the former mayor. They also tour Srebrenica, the city where 8,000 Bosniak Muslim men and boys were massacred.

“I am encouraging students to get to know people who they perceive to be different from them, because I have seen the alternative that seemingly almost always leads to conflict, oppression and ultimately, war and bloodshed. I want a better future for our students, and I want to encourage them to actively be the architects of such a better life in this world. Fundamentally, we are all human, and I hope my students embrace this idea with an open mind and open arms,” he said.

Soliya founder Lucas Welch presented Popovic and Muhammed with the advocacy awards, along with international documentarian Erin Williams, during a recent 15th anniversary celebration dinner showcasing those who exalt the organization’s ethos. The Building Bridges Dinner was held on Nov. 15 at the St. Regis Hotel in New York City. Soliya also honored model and UNICEF ambassador Halima Aden with the Building Bridges Award at the event.

Due to inclement weather, all early morning classes have been canceled at SUNY Potsdam today Thursday, February 27