The Crane School of Music at the 1980 Winter Olympics 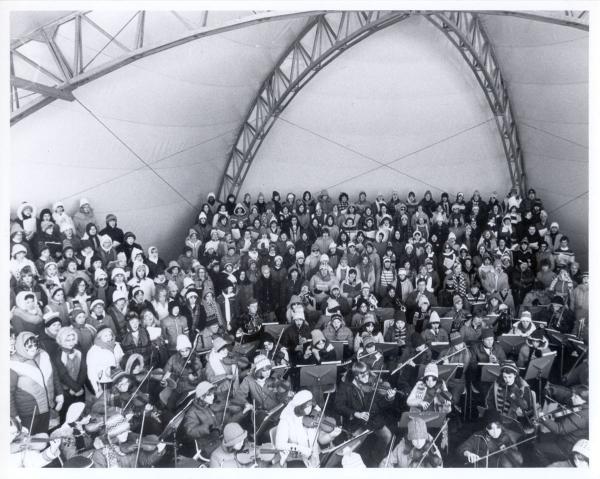 The Crane School of Music played a key role in the 1980 Winter Olympic Games, providing all of the live music at the events in Lake Placid, N.Y.—and pushing the musicians to the limit in performing in cold conditions.

As more than 1,000 athletes from 38 countries around the globe descended on the Adirondacks for the 1980 Winter Olympics, they were greeted with music composed and performed by Crane School of Music faculty and students. The Crane School provided a 600-member Olympic Chorus and Orchestra, a 50-member wind ensemble and three Olympic bands of 50 members each.

The Crane musicians, who were bused in and out each day, donned parkas and boots, instead of their usual tuxedos and gowns. In order to prepare for the wintry conditions, brass performers tested their instruments in the meat freezer of the local supermarket in the lead-up to the Games.

“No previous off-campus undertaking had ever involved all personnel of the School to the extent that this Olympic experience had,” Dean Ralph Wakefield wrote in his history of The Crane School of Music.

On Feb. 9, 1980, the Collegiate Singers, directed by Brock McElheran, performed for the International Olympic Committee, along with visiting dignitaries from participating nations. A full orchestra and chorus were on hand for the Olympic Ecumenical Service in advance of the games, and the 600-member Olympic Chorus and Orchestra were featured during both the Opening and Closing Ceremonies.

Throughout the Olympics, Crane bands provided music for all award ceremonies every evening. Professor Emerita Rebekah Covell led the Crane Symphonic Band for 14 performances over 14 days, often having less than an hour to rehearse the national anthems needed, before being playing them in freezing temperatures.

Most memorably, Covell was conducting the National Anthem as Team USA was presented with gold medals after defeating Finland to take the title.

“When the hockey team was awarded their medal, it was incredible. I thought the walls were going to crash in. When I led ‘The Star-Spangled Banner,’ it’s a good thing I knew it by ear, because the tears were flowing… it was so thrilling. You’ve never felt so patriotic in your life,” Covell said.

The ceremony took place just a few days after the astonishing American defeat of the Soviet team in the famous “Miracle on Ice” game, and the crowd (and the entire country) was rapt, as Team USA took home the gold.

“Mike Eruzione, who was the captain of the team, was standing on the podium with the gold medal, and he started calling, ‘come on guys, let’s go.’ And they started walking around the edge of the arena. The band was at the far end. I started them playing ‘Stars and Stripes Forever,’ and just brought the house down,” Covell said. “They were marching around, and one of them patted me on the rear! Jim Craig, the goalie, jumped on the podium with me and started helping me conduct, with his gold medal around his neck! That’s a memory that I cherish… and I never would have had that opportunity, had it not been for Crane.”

“Other highlights included … ski uniforms for the bands and orchestra, capes for the chorus and moonboots for all! Also, students from Crane were allowed to attend any of the outdoor events during the course of the games,” the 1980 Potsdam Pioneer yearbook said.

In addition to the Crane School of Music participation, approximately 100 Potsdam College students volunteered to assist the Olympic Information Systems Department in alternating three-day shifts during the Games. The department was in charge of compiling event results, timing and scoreboard personnel. The volunteers and staff managed the computer center and helped to organize and compile all data on the events for the official Olympic record books.

Following the Olympics, Crane School of Music Dean Robert Thayer wrote a letter to all students and faculty: “As we think of the kaleidoscope of peak experiences we have had over the past weeks, the word ‘pride’ seems an appropriate summary. We have been proud of our country, out athletes, even our world, as we think of the true meaning of the Olympics.”

College President James H. Young commented in a letter to the local newspaper, “Those who were fortunate enough to view this auspicious beginning had every reason to be proud of the athletes, the nations they represented, and especially the Lake Placid community. Even closer to our hearts, however, was a group of splendid young people and their mentors who represented a village, a town, and a college named Potsdam. Their magnificent performance thrilled millions of viewers and won even greater esteem for those they represented.”