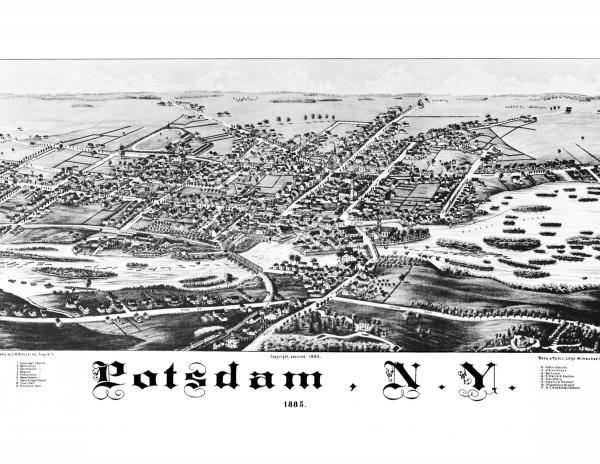 In need of new places to settle and farm, the New York Legislature posted lands that included Potsdam for sale in 1786, two years before the colony became a state by ratifying the newly-written U.S. Constitution.

Commission members drew lines on a map, carving out 10 towns along the Canadian border, and named them all after European locales. Potsdam changed hands twice before any of its wealthy future proprietors set a foot on the ground.

Finally, in 1799, noted surveyor Benjamin Wright was dispatched to the area with seven assistants. They arrived at St. Regis, near present-day Hogansburg. The reservation was originally founded by Iroquois Catholic converts from Quebec 40 years earlier.

From there, Gordon Smith was chosen to traverse the Raquette River, and he got as far south as Norfolk before walking the rest of the way to Potsdam. The rest of his story reads like a parable:

"Here, in the untraversed wilderness, on ground which in all probability had never been trodden by white men before, [Gordon] discovered a tuft of timothy grass, evidently the product of a single seed, dropped by some bird in a spot congenial to its growth. He hailed it as a harbinger of civilization and proof that this would ultimately make exactly what it afterward did, a great grazing region," The New York Times later wrote of that fateful night (1903).

Four years later, land agent Benjamin Raymond returned by boat and built a sawmill and the first house. Next came a dam and a gristmill, as more tenants purchased plots and cleared their land for farms.

The new settlers met Indians "camping in the town," who were doing a brisk business in selling furs, and traded with the new residents, according to "Our Country and Its People: A Memorial Record of St. Lawrence County New York," edited by Gates Curtis (1894).

In 1806, the Town of Potsdam was officially incorporated.

"From that time on, the settlers came, almost all from Vermont, pushing their way westward through the woods," the Times wrote. 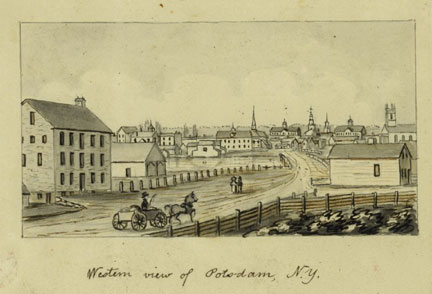 "The nucleus of settlement, the present village, was at the falls of the Racquette River, where Raymond had erected his own home and land office. Clustered around the waterfall were a gristmill, sawmill, fullingmill, carding machine, mechanics shops and fifteen dwellings. The pioneer farmers lived in clearings in the surrounding area. This was a typical clearing-in-the-woods civilization, the beginning all over again," wrote W. Charles Lahey, in The Potsdam Tradition: A History and a Challenge. "Even though life in Potsdam was hard and uncertain, the urge for progress prompted an early movement for education."

With families came children, and a need for schooling. Raymond's home was no longer adequate for holding church services and hosting classes.