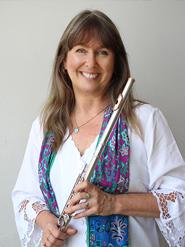 Crane School of Music
Schuette Hall A123
rubiojm@potsdam.edu TEL: (315) 267-2424
Jill Rubio is Adjunct Instructor of Flute at the Crane School of Music, teaching studio flute and assisting with Crane Flute Ensemble. She holds Bachelors and Masters degrees in flute performance from the Thornton School of Music at the University of Southern California, where she was named Outstanding Graduate. A pupil of Roger S. Stevens, she also received instruction from James Walker, Mitchell Lurie, Michel Debost and Toshio Takahashi.

Ms. Rubio is principal flutist and Personnel Manager of the Orchestra of Northern New York. She was featured soloist with the Orchestra 2013, in the premiere of a concerto by Paul Siskind. This work was composed with her eclectic musical background in mind, including elements of rock, jazz and extended flute technique. She is principal flutist and a founding member of the Northern Symphonic Winds. Rubio has been a featured soloist with that group, with the St. Lawrence University Orchestra, and the St. Lawrence University Bach Marathon. An aficionado of music theatre, she performs most summers as a pit musician with Community Performance Series. A frequent chamber music collaborator, Jill is half of the Rubio Flute and Guitar Duo, with her husband, Doug.

Rubio is co-chair of Community Performance Series Advisory Board in Potsdam, served 6 years as Secretary of the New York State Band Directors Association, and is active in the National Flute Association. Jill is an All-State Adjudicator and is a contributing editor for the NYSSMA Manual.