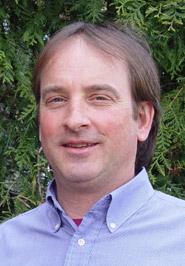 While I took the scenic route through higher education, my love for the study of history dates from an early age. I grew up in Saratoga Springs, NY, the younger son of two politically-active college professors. My parents encouraged my brother and me to pay attention to the world around us and participate in dinner table conversations about what it all meant. It quickly became obvious that making sense of the world required an understanding of history. My parents also encouraged us to pursue other interests, which for me meant bicycle racing and the rock and roll guitar.

I began to study history in earnest at Middlebury College, where I focused on U. S. foreign relations. After graduation, though, I spent five years bike racing full-time and working for a bicycle manufacturer that had sponsored my racing career. But after a few years in business, I began to miss the intellectual stimulation of academic life and enrolled in graduate school to begin work on a Ph.D. in history.

I began my graduate career at the University of Maryland-College Park, where I discovered Latin American history and developed an interest in the connection between domestic affairs and foreign relations, particularly during the Cold War. I also ran off with a rock and roll band. I managed to finish my M.A. at Maryland, but my pursuit of a Ph.D. was delayed for a few more years.

After I figured out how difficult it is to make a decent living playing rock and roll music, I enrolled at the University of Wisconsin-Madison to complete my degree. There, I broadened my work in Latin American history to include the Caribbean, particularly the British West Indies, and I wrote a dissertation that explores the connection of the Cold War and the Civil Rights Movement through the perspective of religion. I am now working on turning my dissertation into a book.

At SUNY Potsdam I teach a variety of upper-level courses, including: the U.S. since 1945; the History of U.S. Foreign Relations from 1763 to 1901 and from 1890 to the Present; 20th-Century Latin American History; and the history of Caribbean colonialism. In the future, I plan to offer courses in Race and Class in U.S. history and African American history. I am also the advisor for the Student History Association.

In my leisure time, I still ride my bicycle, most enjoyably in the company of my wife, Lynn Hall, who teaches in the Teacher Education Department at SUNY Potsdam. We also take full advantage of the outdoor activities available in the North Country, including hiking, canoeing, camping, and swimming, not necessarily in that order. I also continue to play music, sometimes solo but most often with our new friends in the Potsdam area.