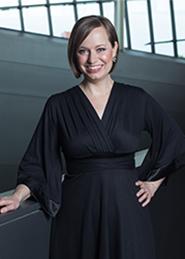 Lorraine Yaros Sullivan, mezzo-soprano, is an active and versatile performer, enjoying success in a variety of genres and styles including opera, oratorio, chamber music, and art song. Some of her favorite opera credits include Dorabella in Mozart's Così fan tutte and Ottavia in Monteverdi's L'Incoronazione di Poppea, which Opera praised as "regal" and "affecting." She is in demand for her concert and oratorio work in the US and Canada, with recent performances including a range of styles from Bach to Libby Larsen. Dr. Sullivan has a special interest in the intimate collaborations of chamber music and art song. She appeared at the Kennedy Center's Terrace Theater and travels nationally and internationally as a recitalist. One tour included a series of recitals in Taiwan performing American art song and musical theatre, culminating in a performance at the National Chiang Kai-Shek Cultural Center. Dr. Sullivan specializes in turn of the 20th century music and contemporary American music. She is a featured soloist on the Delos recording All the Heart of Me!: The Choral Music of Margaret Ruthven Lang. She recently performed in the workshop premiere of three new works by Anthony Davis, Lori Laitman, and Tom Cipullo, three of four finalists in the Domenic J. Pellicciotti Opera Composition Prize. She served as Executive Director of the Fall Island Vocal Arts Seminar during its 2016 and 2017 seasons.

Currently, Dr. Sullivan is Associate Professor of Voice at the Crane School of Music at SUNY Potsdam. She previously served on the voice faculty at Bowling Green State University in Bowling Green, Ohio, where the Undergraduate Student Government awarded her the College of Musical Arts faculty member of the year. She was selected to participate in the 2009 NATS (National Association of Teachers of Singing) Intern Program, where she worked with master teacher Carmen Balthrop. Committed to teaching healthy, functional singing in any musical style (not just classical!), Dr. Sullivan attended the Contemporary Commercial Music Vocal Pedagogy Institute at Shenandoah University. She is Level III certified in Somatic Voicework™ - The LoVetri Method. She also has additional performance experience in musical theatre, vocal jazz, and pop music.