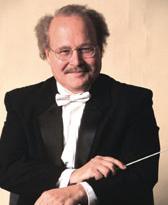 Dr. Topolewski earned his B.M. degree at Michigan State University, his M.M. at Catholic University and his D.M.A. from the University of Illinois, Champaign-Urbana where his principal instructor and mentor was Harry Begian. He has done additional conducting study with Herbert Blomstedt, Music Director of the San Fransico Symphony. Dr. Topolewski has been a soloist, conductor and lecturer in 38 of the United States, the major cities of Mexico, Australia and Germany. He served for three years as soloist and enlisted conductor with the Army Band and Orchestra in Washington, D.C. Under his guidance the Crane Wind Ensemble has recorded 2 CDs, toured Germany and given many premiere performances. On the faculty of the Crane School from 1987 to 2006, he conducted the Wind Ensemble and taught conducting.