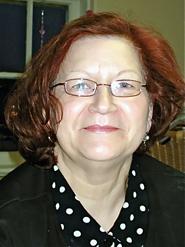 Liliana Trevizán, (PhD. University of Oregon) is a professor of Spanish Literature with expertise in Latin American Studies, Cultural Studies, and Women's and Gender Studies.

Dr. Trevizán is currently the Chair of A&S Curriculum Committee and she has been a founder member of the Women's and Gender Studies Program, and the Task Force on the Status of Women.

She has received the President's Award and a Faculty Research and Scholarship Award by the SUNY Chancellor; as well as a Faculty Senate Resolution. She is a member of Sigma Tau Delta, Omicron Delta Kappa, and other Honor Societies.

She advises the Spanish Club, and students have repeatedly named her Favorite Professor.

She participated with Spanish majors in the Bridging Cultures Mural interdisciplinary project. Invited artist Francisco Letelier, who was in residence at SUNY Potsdam, led the creation of the mural.

An active member of the local community, Professor Trevizán is a member and past president of the St. Lawrence County American Association of University Women, AAUW.

She is a productive scholar who regularly presents at international and national conferences.

She also teaches the different levels of the language classes and contributes to the WGS curriculum.

For the new Potsdam Pathways Professor Trevizán designed Women of Color, a Ways 103 class, and Memory and Human Rights, a Ways 101 class.