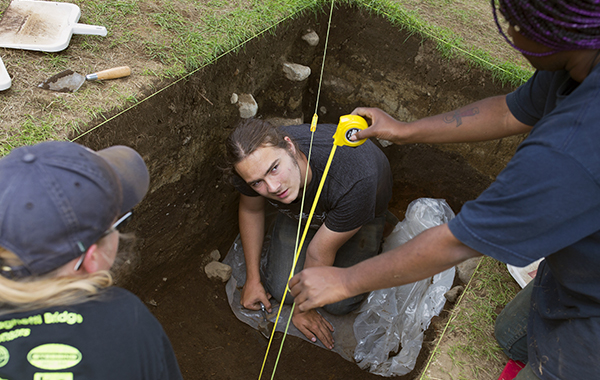 Sitting in a hole, surrounded on all sides by layers of exposed soil in a 2-meter-long excavation unit, SUNY Potsdam junior Michael Madeiros ’19 uses a trowel to dig for artifacts on abolitionist John Brown’s farm. As he digs deeper and removes soil—to later be screened for artifacts—he discovers a fully intact glass bottle, just one of many items found while methodically examining the ground around John Brown’s house.

He is one of 12 SUNY Potsdam students who just finished a four-week archaeology field school at the John Brown Farm State Historic Site in Lake Placid with Dr. Hadley Kruczek-Aaron, chair for SUNY Potsdam’s Department of Anthropology. They have been employing various field techniques to find artifacts that could paint a picture of life on Brown’s farm between 1855-1863.

Brown moved to the Adirondacks in 1849 with his wife Mary and their children to help with the Timbuctoo settlement, a community of black farmers who were given land by the abolitionist Gerrit Smith. In 1855, they moved to the now historic farm, where his body was also laid to rest after his execution in 1859. “We know, from American history, a lot about John Brown. There have been many biographies written about the famous abolitionist who raided the federal arsenal at Harper’s Ferry in the fall of 1859,” said Kruczek-Aaron.

However, she said, less is known about his wife and children and everyday life on the farm. “When I look at this house I don’t really look at it as John Brown’s Farm, I look at it as Mary Brown’s Farm…so that’s what we’re trying to do is really reframe it and ask questions about women’s contributions to reform and activism,” Kruczek-Aaron said.

To uncover clues about the past, the students start by digging shovel test pits, small circular pits that expose changes in the soil and reveal artifacts in the area. They also think about how 19th century people would have used the landscape. They do metal detector surveys and use historic photographs, all to inform their decisions about where to start their larger excavation units.

This is the fifth field school led by Kruczek-Aaron since she started at SUNY Potsdam in 2005. What makes this site so unique is that students are literally digging excavation units as close at nine feet from Brown’s front door. “It’s been a very convenient, easy place to do work as opposed to where we’ve worked in the past…here we have a bathroom and running water…I always tell the students, ‘you don’t know how good you’ve got it here at this site,’” she said. 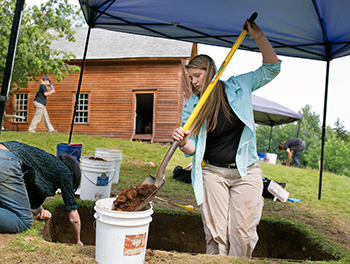 During this field school, students have been using trowels, dust pans, root clippers, spoons and shovels to find found tobacco bowl fragments, embroidery scissors, a mason jar dated 1858 and shoe soles. In one stratum (layer of soil), students discovered over 1000 pieces of glass fragments and hundreds of pieces of ceramic. “We keep digging, with each strata we get to, we take very detailed records. That’s what distinguishes us and makes us different from treasure hunters and relic seekers,” said Lauryn Czyzewski ’19, a junior archaeology major at SUNY Potsdam.

Changes to the landscape over the years have created one of the greatest challenges for the budding archaeologists. In the 1950s, the State of New York decided to make the house look like it did when John Brown’s family lived there. They removed the additions to the house and extra porches from the original structure. During this process, they also added a layer of sand to improve the slope in the backyard. “We see this thick layer of sand fill, that basically was trucked in after they removed the addition and then leveled the landscape so that it didn’t have too steep of a slope. It took us a little while to figure that out,” said alumna Lissa Herzing ’17 who has been a teaching assistant at the field school.

While Kruczek-Aaron feels that they haven’t found as many mid-19th century artifacts connected to the Browns as she would have liked, she said that it has still be very rewarding for her students. “In terms of the students getting the chance to find objects, it certainly has been a good site for that. There’s no shortage of artifacts being found,” she said.

They also had the opportunity to work alongside Brown’s great-great-great granddaughter, Alice Keesey Mecoy who flew in from Texas just for the dig after being contacted by Kruczek-Aaron. With the help of SUNY Potsdam archaeology students, Mecoy used tools to excavate a hole right in front of her ancestor’s front door. “It’s been amazing and everyone has just been so kind,” Mecoy said. “I’ve had such a great time with the students.”

As they wrapped up the dig last week, Alexandria Menteer ’18, a senior double major in archaeology and anthropology, was busy working in an excavation unit in Brown’s backyard—one of the most prolific units. “It’s been awesome. It’s a really great experience. I’ve been learning a lot…I would rather be out here doing the work and getting dirty, than sitting in a class reading papers about it. I want to experience it for myself. I would definitely do it again,” she said.

With bags of artifacts in hand, carefully separated by the type of material and stratum from which they came, the students are now prepared for the next step in the process. Next spring, Kruczek-Aaron will offer an archaeological lab techniques class where they will be able to work with these artifacts in a lab setting. They will learn artifact analysis and how to clean, catalogue, and conduct vessel reconstruction. “That class allows them to move from A to B and really to complete the circle and see how archaeologists do their work,” Kruczek-Aaron.

For more information about the anthropology and archaeological studies majors at SUNY Potsdam visit: http://www.potsdam.edu/academics/AAS/Anthro