Fresh out of college with a degree from Princeton University in 2001, Assistant Professor of Environmental Studies Dr. Jessica Rogers was offered a job in Kenya to conduct research on zebras in a remote region four hours north of Nairobi. Her task? Photograph hundreds of zebras, in order to determine their migration patterns.

“That was at the dawn of GIS [Geographic Information Systems] and digital cameras. I had a three-pound digital camera that I’d take out into the field with a GPS unit. I photographed probably 1,500 zebras facing left and barcoded them up the neck,” Rogers said. “It was a really cool way of proving a spatial issue that actually linked to conservation. How do we conserve them if we don’t know if they actually live here all the time? 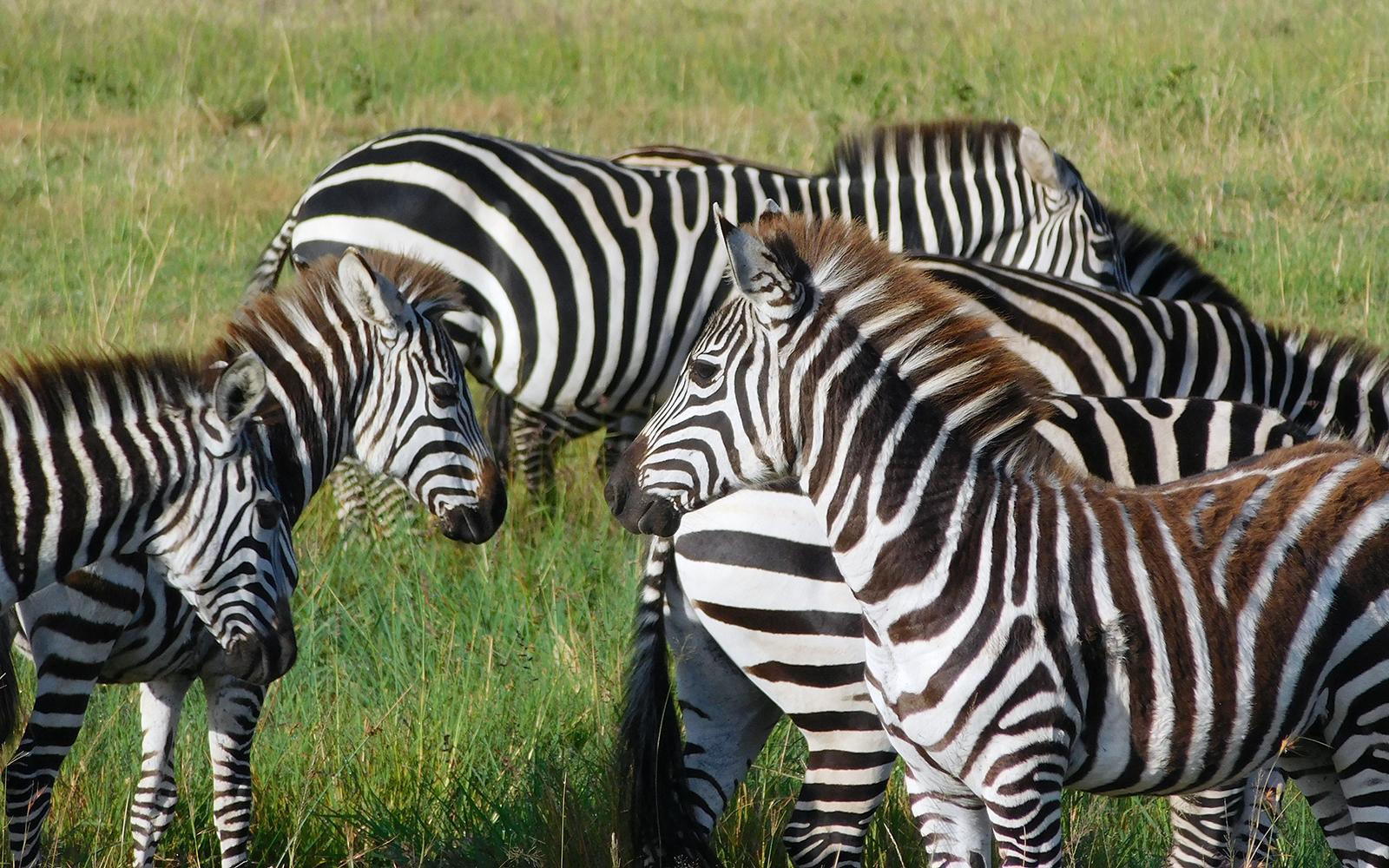 Her work in Africa set up a long-term connection with global conservation efforts. She first moved back to New York City where she landed a job with the Wildlife Conservation Society at the Bronx Zoo. “I was the intern for their program in Asia and Africa. So, I communicated with conservationists who were in all of those countries, 53 countries at the time. I would correspond with the people who were running their programs in these other countries and build websites for them,” she said.

From there, she entered a graduate program at Columbia University, which culminated with a return trip to Africa for her Ph.D. research. She spent time looking at the forests in Central Africa and Gabon, their new national parks system and the conservation decisions being made there. “In literally the snap of a finger, they went from zero national parks to 13—and 10 percent of the country protected in one day—when President Bongo made the announcement at the World Parks Congress in Durban, South Africa in 2002.” 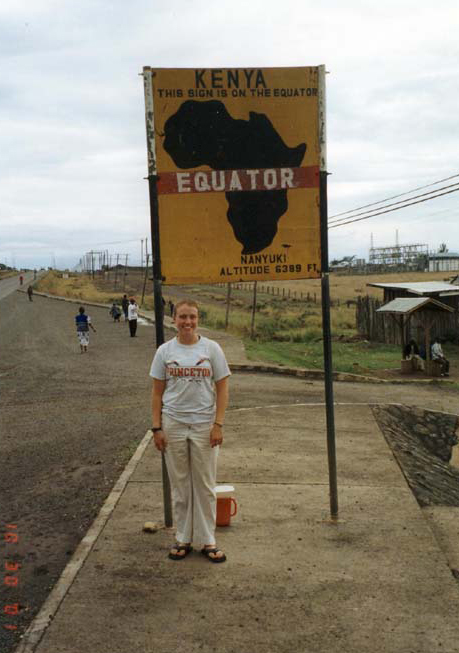 Rogers started analyzing satellite photographs and creating GIS maps to examine and document the human impact on these newly designated national parks.  “That was my Ph.D. research, looking at how we know protected areas do anything. Is there less deforestation inside them? I could use satellite photographs and GIS technology to really analyze how that worked,” she said. “I wanted to see how science informed our conservation policy decisions.”

After finishing her Ph.D. in 2011 she moved back to her childhood home—Potsdam, N.Y. She landed adjunct teaching positions at St. Lawrence University, SUNY Potsdam and Jefferson Community College. In 2015, she was offered a tenure-track position at SUNY Canton and then the next year, a tenure track position opened at SUNY Potsdam more in line with her field of study. Now she is helping to lead SUNY Potsdam’s Department of Environmental Studies. “The nice thing is that environmental studies is still a growing discipline. It’s been a growing major and department here for 15 years. We only became a department six months after I was hired,” she said.

In the process, she has created unique research opportunities for her students, including an in-depth GIS project with three of her seniors last semester. Rogers and her students looked at satellite images from 1990, 2000 and 2013 to determine how the national parks have changed over time. “They worked with me on recreating my Ph.D.—looking at more data of how deforestation affected protected areas in Central Africa. They got to do an entire semester of project-based learning,” Rogers said. “That will be research I will be working with my students going forward for the next couple of years I hope.”

“I want my students to be the best version of themselves. My favorite part of teaching is that moment when something I say or something I connect to, blows their mind. If I’m teaching intro students, it’s usually figuring out that pineapples grow out of the ground and not a tree. It just changes how they think about everything.”

Another project revolves around the purple loosestrife, an invasive plant species in Northern New York. Rogers is into her third summer of research with her environmental studies students to map the infestation. This summer her team has gone one step further—trying to determine the most economically efficient technique for eradicating purple loosestrife. Through funding from the Nature Conservancy, they examined different methods including cutting off the flowering tops, digging up the plants and introducing the Galerucella beetle to eat the purple loosestrife.

Her team is also in its third and final summer of collecting GIS data on the wild purple loosestrife growing throughout the North Country. Using GIS receivers—purchased through a Lougheed Applied Learning Grant—her students have been able to boost their signal in remote areas while collecting GIS data points. Starting on Route 56 just north of the entrance to the Adirondacks, they have been mapping the purple loosestrife along an 88-mile section of state highway from Colton to Ogdensburg, and from Waddington to Alexandria Bay. 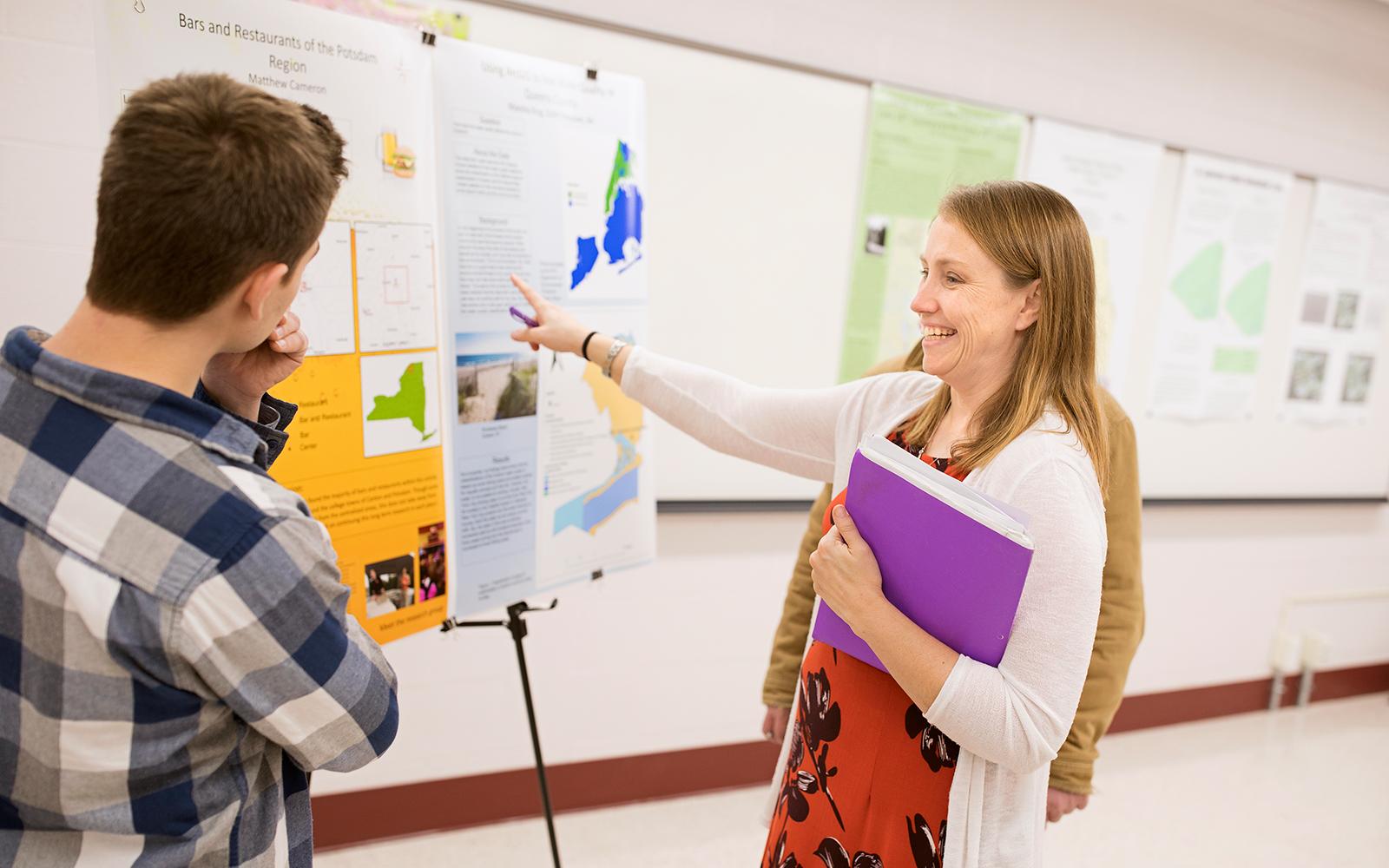 These research opportunities are unique at the undergraduate level and give students a chance to take what they’ve learned in the classroom and apply it in the field. “All of the core classes that the Department of Environmental Studies offers require some level of activism, service learning or project-based learning,” she said.

Whether she’s teaching her introduction to GIS class, a senior seminar in environmental studies or an environmental futures class, Rogers truly cares about her students on both an academic and personal level. “I want them to be the best version of themselves,” she said. “My favorite part of teaching is that moment when something I say or something I connect to, blows their mind. If I’m teaching intro students, it’s usually figuring out that pineapples grow out of the ground and not a tree. It just changes how they think about everything.”

To learn more about the Department of Environmental Studies, visit: https://www.potsdam.edu/academics/AAS/depts/EnvStudies.