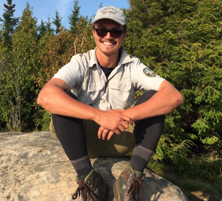 "During the summer into the fall of 2017 I was fortunate enough to be the Fire Tower Steward on Hadley Mountain. In my time as a steward I helped to educate the public about Leave-No-Trace principles by establishing a rapport with the hikers and answering any of their questions about the region to the best of my ability. To my surprise I spoke with thousands of hikers on the mountain. To be the man on the mountain was like I had found the ultimate fountain. Living on the mountain I felt in touch with my surroundings: the blue, the green, and everything else in between. It was absolutely pristine. Often times at the end of my days I would sit and admire the ambient rays. In that time amongst the trees I was enamored with the earth and how you can’t put a price tag on what it’s worth. My time as the Fire Tower Steward on Hadley Mountain was absolutely incredible. I’ve spent most of my life in the Adirondacks and always wanted to be a part of protecting it. As the Fire Tower Steward on Hadley Mountain I was able to live in a log cabin on top of a mountain with my dog and do just that. I was living a part of my dream. Moving forward this opportunity provided the inspiration and experience to pursue a career in the environmental field."

About the Internship:
As Fire Tower Steward, I lived in a cabin on top of Hadley Mountain. I was responsible for any maintenance/restoration to the tower, cabin or the trail (picked up debris, installed point bars, and defined the trail). On the summit, it was my job to educate hikers on the mountain and fire tower’s natural history, human history, flora/fauna, geology, Leave No Trace practices, and the surrounding region of the Adirondack Park.