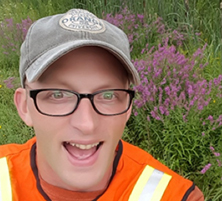 "The purpose of the internship was to collect data points via a collector app for ArcGIS online of the invasive species the purple loosestrife to begin what is going to be a multiyear study to reduce/eliminate this wetland invasive. This entailed almost 1300 data points collected in the St. Lawrence County, in a larger context, to introduce spacial data to the lack there of in the region.  Spacial analysis is an exponentially growing industry and I know the knowledge gained of observation and translation into a spatial analysis program will do wonders with countless industries. Concerning future plans, I was recently introduced to the graduate program at UMASS for GIS. This is an online program which allows the students a work life while attending school."

Organization: NYS Research Foundation
The organization funding this project is the St. Lawrence River Research and Education Fund which is generally involved in exactly what it sounds like. The only caveat to this research was we were to document any other plant species, invasive or not.

About the Internship:
Tasks were extremely straight forward. We were to drive from the “blue line” of the Adirondacks to Canton via rt. 56, from there travel to Ogdensburg via rt. 68, then head south via rt. 37 until the St. Lawrence County sign was reached. Returning to Ogdensburg, we were to head north until we reached the center of Waddington. Traveling up one side and down the other in a vehicle and walking were the methods of collection used. We worked a minimum of 6 hours a day usually starting a 6 am. The first 120 hours were paid while the remaining 40 hours was unpaid.