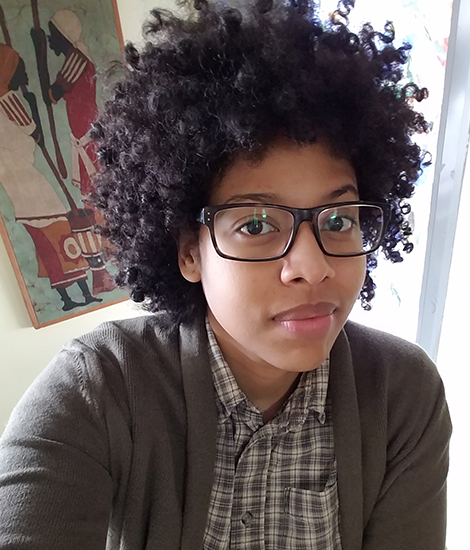 SUNY Potsdam alumna Vita Ayala ’10 is a fresh new voice in the world of comics. After graduating, Ayala spent time working in comic and book retail and worked night security at one of the oldest museums in New York City, before finally pursuing a career as a writer. They have since written for DC Comics (“Rebirth Wonder Woman Annual #1,” “Rebirth Batgirl Annual #1”), Dark Horse Comics (“Secret Loves of Geeks”), and Image Comics (“B*tch Planet Triple Feature #4”), as well as having created their own series through Black Mask Studios (“The Wilds,” “Submerged”). Ayala returned to campus in the spring of 2018 as a guest speaker during the LoKo Arts Festival.

"As soon as I learned how to read, I was writing… Writing for me is a compulsion. I have always loved comics as a medium – the collaborative aspect, the blending of text and more traditional visual art, the fact that they could reach such a broad audience. As a reader, comics were some of the first stories I was able to read on my own, and as a creator, comics were some of the first art I could make on my own.

Loving the medium, being unable not to write, and having friends who were not just invested, but insistent that I try, is what led to my pursuing comics as a career.

Having the chance to humanize people who have been traditionally ignored or villainized is incredibly important. And satisfying as hell. Each character can only represent one viewpoint, but the more we have, the less isolated people will be. Most of the time, I am writing for younger versions of myself – stories and characters I would have wanted or needed to see as I was making my way through the world. I don’t want younger brown or queer people to see a lack of themselves – I don’t want anyone growing up knowing what it felt like for me."

Supergirl 19
"With “Supergirl #19,” which I co-wrote with my good friend Steve Orlando (the regular writer on the series), I was asked to write a story about what I would have needed Supergirl to be, to me as a younger queer person. I have always been fully capable of handling myself physically, but there was a lot going on psychologically when I was a teen. What I needed then was understanding and acceptance. For the issue, I got to introduce a non-binary Afro-Latinx character (Lee Serrano) who is struggling with issues having to do with their identity, and with being bullied at school. It was a really important issue to me, and I still feel so proud whenever someone brings it to me to sign."

The Wilds
"With “The Wilds,” I can write about whatever I want. And what I wanted to write about was the emotional, psychological and physical exploitation of women and people of color, especially women of color, and especially Black women. I also wanted to write in a genre (post-apocalyptic, especially zombie) that has traditionally been presented from the white and male perspective, and show what it looks like from another point of view. There are the traditional elements of the genre there, but because the POV is different, the story is different. I like giving people more options!"

Submerged
"My new creator-owned series, “Submerged,” came from a confluence of being in New York City during Hurricane Sandy, and my own need to work through my complicated feelings regarding being an older sibling. The book would not exist at all without my experiences."

On SUNY Potsdam:
"I went to college with my teeth gritted to get through it, so I could go to work. I do not do well in traditional academic settings, even though I am a curious person by nature and love to learn.

But I came to love the people at SUNY Potsdam as much as I respected them. Honestly, what really stood out to me across the board was how much the professors were invested in us as people, and not as receptacles for their knowledge.

I had many deep friendships among my peers, but I also had as many with professors and other staff at the school. I developed deep relationships with faculty in philosophy, psychology, and English and communications. I also spent a lot of time in the dining facilities and got to know and care for a lot of the people there.

To me, SUNY Potsdam is more than a university, or even a community – it is a family. It sounds like a soundbite or something, but that is the honest truth. I miss the people there every single day, and coming back to campus recently to speak filled me with such joy – to see them again, but also to see so many more people like me there, and to know that they would be in such good hands."