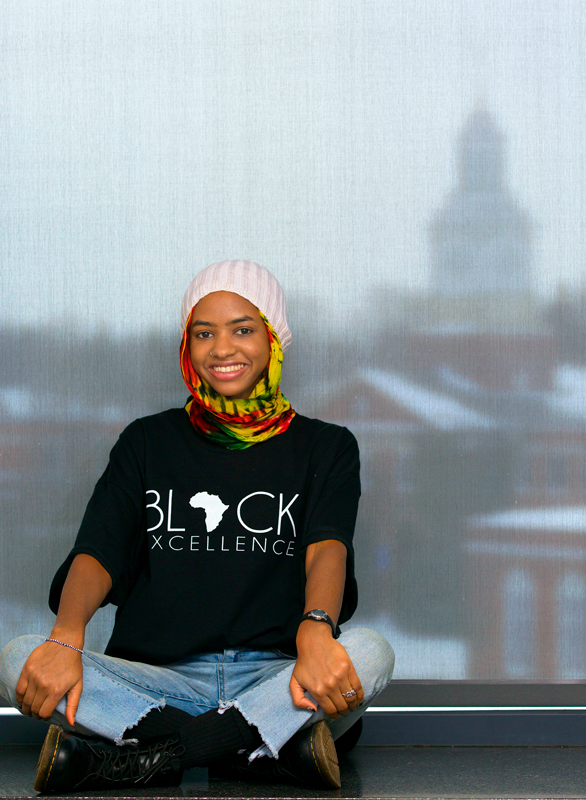 Kadiatou Balde was nine years old when her parents brought her and her five siblings from their home in Conakry, Guinea in West Africa to put down roots in the U.S.  As the daughter of immigrant parents growing up in the Bronx, Balde found the transition to be, in her words, “pretty heavy.”

She didn’t speak English or Spanish – her native languages were French and Peul, and it was tough to make friends. She often felt like she didn’t fit in, especially in middle school when she started wearing the hijab, a symbol of her Muslim religion. Eventually, she learned English and later set her sights on attending college in the U.S.

Although it was really far from home, and she would be the first girl in her family to go away to college, she chose SUNY Potsdam because the College offered her the most financial aid of all the schools that she was considering. Without scholarship assistance, she could not have afforded to attend.  She was not able to visit campus before she arrived for classes, but Balde soon realized that she had made the right decision.

“It was a great learning environment for me,” she said. “I also felt that there was a lot that I could bring to the school to bring about positive change,” to spread awareness of what is happening both in the Muslim world and the black community.  “It’s important to understand how to get past your differences,” she added.

Today Balde is a junior majoring in biology and communications, and minoring in Arabic language and cultural studies. She is the recipient of the Shane Shaul Memorial Scholarship, the Jane D. and Thomas L. Russell Distance Education Scholarship and the Honors Scholarship.  Like the namesake of her Shaul Scholarship, Balde is a student leader, having co-founded the Ummah Club with her friends as a safe haven for Muslim students, although everyone is welcome to join.  She was a resident assistant for her first two years and is a University Police dispatcher, as well as a peer counselor in training and P’DAM ambassador and mentor, through the Center for Diversity.

She is also a Presidential Scholar, currently researching the scholarship of Muslim women. “My goal is to deconstruct Western stereotypes of oppressed women in Islam by highlighting some of the most influential Muslim women in history, women who show that the Islamic message, which stresses gender equity and rights for women, does not restrain them, but in fact inspires their pursuit of knowledge,” she said.

As part of the project she will be studying historical and contemporary women in Islam from primary sources, including the Quran and hadiths, as well as modern books all written by women. She will be conducting personal interviews with Muslim women in America, most of whom are right here in Potsdam, but she will also interview Muslims in New York City and then in Oman this summer through her study abroad program to the Middle East.

“The best part about this project is that I get the opportunity to not only expand my knowledge on my own religion, but that I also get to read and learn about women,” Balde said. Ultimately, she said she plans to make a documentary summarizing all of her research and highlighting Muslim women's ability to make significant contributions to knowledge and society.

When she graduates she would like to work for a non-profit or government humanitarian organization. “I want to help others,” Balde said.  “Whatever I do, I will do it with passion, perfection and integrity.”