Cristina Jiménez ’20 moved to the United States with her mother when she was just 12 years old. Although she had spoken with her father from her childhood home in Ecuador many times before, she had never seen him face-to-face. That all changed when she picked up her roots and relocated to Long Island, N.Y.

“It was hard at the beginning, especially with the language. My dad was here (in the U.S.) and I had never met him before—it was really nice to just see him for the first time, it was very emotional,” Jiménez said.

She quickly started adjusting to her new surroundings and new school, and at the encouragement of her teacher, she took advanced English classes. When she reached high school, she enrolled in classes at BOCES, where she became a certified nursing assistant, leading to a job at the South Hampton Hospital—there discovering both her love for helping people and her interest in using her language skills to improve communication.

As a senior in high school, Jiménez had the chance to work with patients dealing with mental health issues and she realized that she really wanted to be a clinical psychologist, while also using her Spanish language skills to help people. One day a patient was admitted to the hospital who only spoke Spanish, and Jiménez was able to translate between the doctors, nursing staff and the patient. “I felt good! I was actually able to use my Spanish to help that person,” she said.

Now at SUNY Potsdam, Jiménez is pursuing a double major in Spanish and psychology. “I love Potsdam. I love the environment here. I have two sides to rely on, the Spanish professors and the psychology professors,” she said. 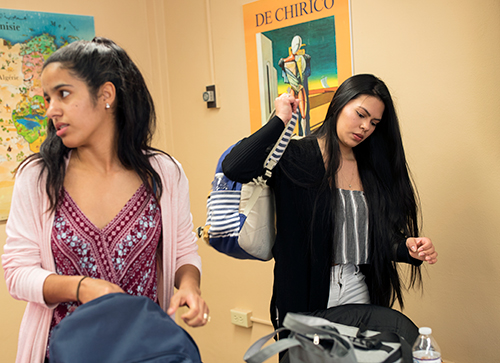 Jiménez is currently taking a Memory and Human Rights class with Dr. Liliana Trevizán, a senior seminar where students are examining everything from Pinochet’s dictatorship in Chile to the cultural and historic events occurring in Mexico. She has also been working with Dr. Sergio López as part of an internship through the Lougheed Center for Applied Learning’s Bob Award, endowed by Robert J. Hill ’77 to financially support faculty in developing and implementing applied learning experiences with students.

In the spring of 2018, López set up internships for five SUNY Potsdam students to organize the AIBR International Conference of Anthropology, an international scientific event held at the University of Granada in Spain, from Sept. 4 to the 7. As part of the organizing committee, Jiménez worked on social media marketing, sent out thousands of emails to attendees and provided Spanish to English translation for a variety of materials for the conference, for everything from the event’s program to directions.

As icing on the cake, Jiménez got to travel to Granada with López and her classmates in September—fully funded by the Bob Award and AIBR. During the conference, she worked as a volunteer to keep the event running smoothly—handing out credentials to the participants, assisting the photographer and providing water to the guest speakers. “I would say that helping people was my favorite part. I was meeting a lot of people from Ecuador and Peru, a lot of different countries. I felt very welcomed,” she said.

Besides creating an international applied learning experience for Jiménez, López has also been helping her prepare for future job opportunities and graduate school as part of a speaking intensive Spanish class, Intermediate Conversation. In addition to educating students about Spain, López creates mock interview scenarios and helps students refine their résumés. “What I like about Dr. López is that he’s always there to help you out with whatever you need,” she said.

For her other major, she’s been working with Dr. Claire Starrs in the Department of Psychology, a professor with a background in clinical psychology. “I want to do the same thing that she’s doing, I want to help people with their problems. I had a class with her that talked about anorexia and different disorders that I’m really interested in. I really want to focus on therapy.”

Jiménez also praised Dr. Arlene Stillwell’s psychology classes. “It’s not just class, she wants to be your friend too. And she wants to let you know that if you need help, she’s there for you no matter what,” she said.

The support system she has found at SUNY Potsdam extends beyond the classroom. She also said that the Collegiate Science and Technology Entry Program has also been a tremendous source of encouragement financial support, helping to cover the cost of her books, paying the fees associated with taking the GRE and in providing her with guidance. “If you have any problems you can go talk to your counselors. Programs like CSTEP have made me like SUNY Potsdam even more,” Jiménez said.

Now almost halfway through her junior year, Jiménez is thinking about the next step, and she’s getting ready to apply to graduate schools to pursue a Ph.D. in clinical psychology. Her ability to communicate effectively in both English and Spanish will add another tool to her arsenal as she heads out into the real world.

For more information about the Department of Psychology, visit: www.potsdam.edu/academics/AAS/Psych

For more information about the Department of Modern Languages, visit: www.potsdam.edu/academics/AAS/Lang