During his four years at SUNY Potsdam, Amiere Bell ’20, a theatre major with minors in dance and speech communication, grew both academically and artistically. He has choreographed dances, played the lead role in “Wiley and the Hairy Man,” and landed on the President’s List on more than one occasion—an impressive feat after entering SUNY Potsdam with a learning disability.

“It’s very hard for me to focus on math and reading, so that was a big challenge for me. When I write essays, it’s very difficult. I also didn’t start dancing until I came here, but I was able to do these things, take classes and grow once I came to SUNY Potsdam,” Bell said.

Bell first learned about SUNY Potsdam from Kristie Fuller ’95, his theatre teacher at Indian River High School, who also works as an adjunct professor at the College.  Fuller brought her students to SUNY Potsdam for mock interviews, which gave Bell a chance to see the campus firsthand. “I fell in love with the space and I was like, ‘This is the college for me!’ This college has the arts, it’s diverse, the culture is rich. That is why I chose Potsdam,” Bell said.

Bell entered SUNY Potsdam through the Educational Opportunity Program, which provides academic support and financial aid to students who show promise for mastering college-level work, but who otherwise might not be accepted. “My EOP counselor, Linette Bracero-Torres, is truly, truly amazing! She is a person with a kind heart and she’s willing to go to any lengths for her students—The EOP program has really strengthened me and brought me outside of my element,” Bell said.

Bell will be taking on a leadership role with EOP his senior year. “I’m going to be a student mentor for EOP next semester where I’ll be giving advice to students and helping them with their homework,” he said.

"This is the college for me! This college has the arts, it’s diverse, and the culture is rich. That is why I chose SUNY Potsdam.” 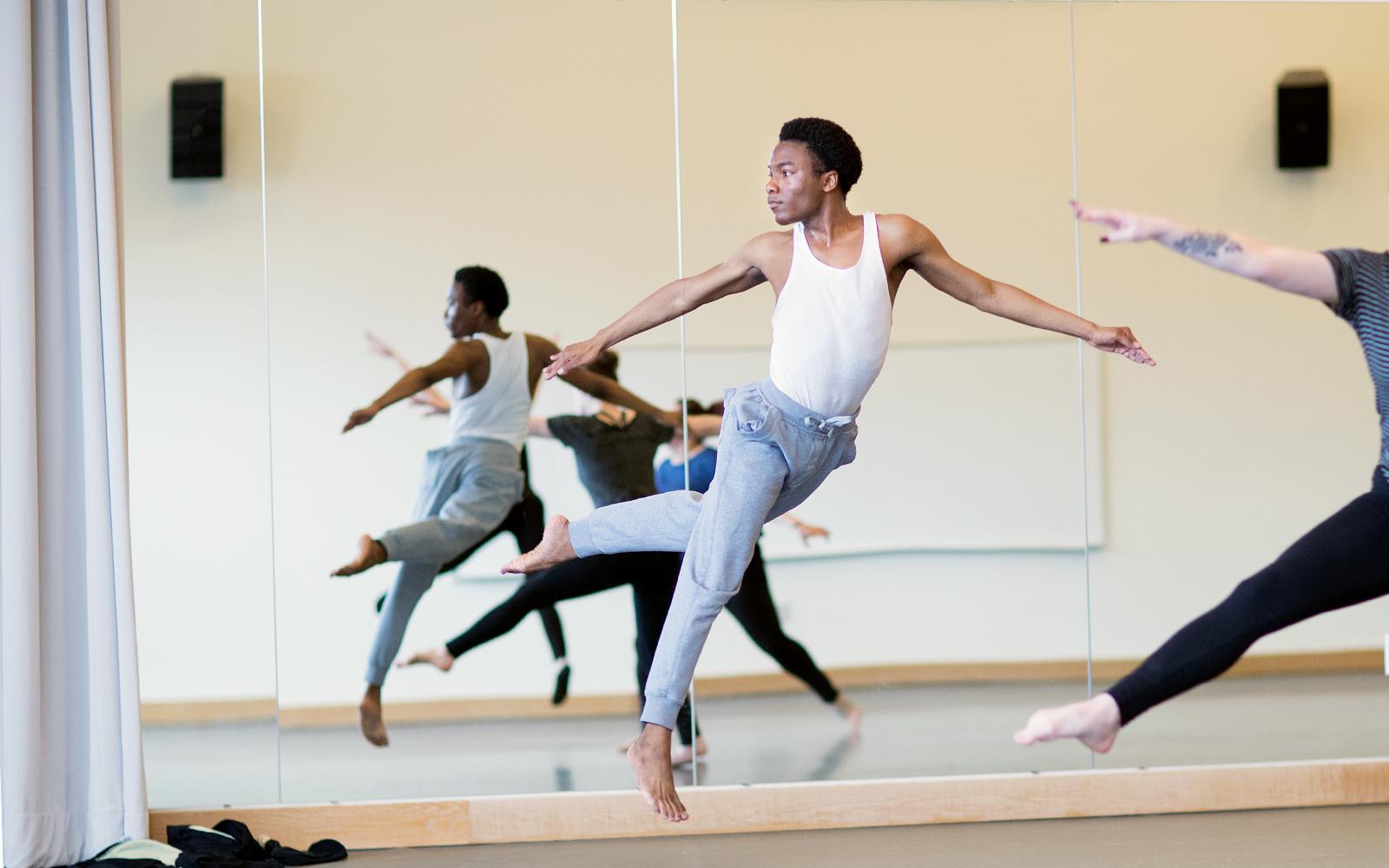 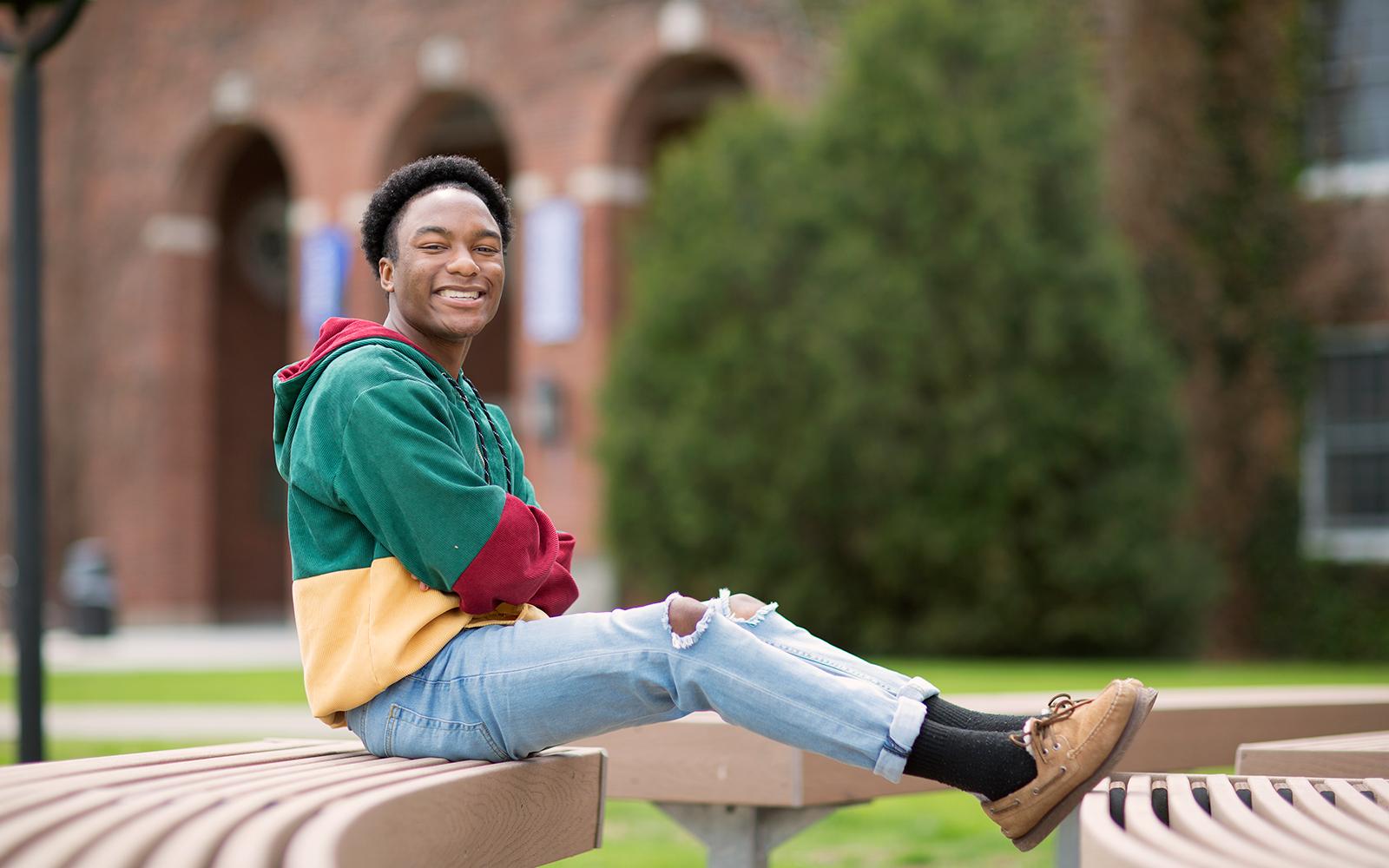 Bell came to SUNY Potsdam with no previous dance experience, but quickly became passionate about dance, drawing inspiration from his talented professors like Cynthia DuFault and Don Borsh. “When I first started dancing, I really wasn’t that good, but Professor Borsh said he was like me—he didn’t start dancing until he was in college. He’s been my inspiration throughout this whole process of growth,” Bell said.

Bell then took more advanced dance classes and choreographed a dance performance for his classmates. He also landed a prominent role as an actor in the children’s production of “Wiley and the Hairy Man” during his junior year. “The process was very rigorous. I was the lead and I had all these lines to memorize. The way I went about it was that I studied different children and I studied Boo from ‘Monsters, Inc.’ Some of the cast members were dancers from the department, which was a nice collaboration getting both theatre and dance together. It was a really nice experience to have that,” Bell recalled.

A respondent from the Kennedy Center American College Theater Festival attended “Wiley and the Hairy Man,” and based on Bell’s outstanding performance, he was selected to attend the festival and audition for the Irene Ryan Acting Scholarship in the spring of 2020. “I worked with my scene partner throughout the summer and the fall semester of my senior year, so we were prepared for the festival,” Bell said.

Bell received the Phi Mu Alpha Sinfonia Fraternity scholarship from The Crane School of Music, given to a junior who exhibits outstanding musicianship along with academic promise. Bell was also the recipient of the Betty & Merton Evans Scholarship and the Presidential Scholar Award, both of which he received for a third time during his senior year. Bell’s dedication and work ethic come from his mother, Kami Bell, who recently retired from military service after serving in the U.S. Army for the past 20 years. “My mom always told me, ‘your grades are important because they’re a reflection of me,’” Bell said.

Being a child in a military family came with its challenges. He lived in Germany, Texas, California and Georgia before his mother was stationed at Fort Drum outside Watertown, N.Y. Bell remembers when he was in middle school and his mother was deployed overseas. “That was a very hard time for me because I didn’t know where she was. I remember that I had a situation with a friend, and they had to call my mom all the way in Iraq to deal with it. I would say it’s a very heartbreaking experience because you never know when you’re going to get your parent back, or if they’re going to come back. For me, that is the saddest part of being a military child,” Bell recalled.

Bell loved being immersed in different cultures though throughout his youth. “Being a military kid was a very enriching experience. It was so wonderful. I loved diving into and learning about different cultures. When I was in Germany, I was little, and I didn’t know that much, but I learned German and I learned different things about the culture,” he said.

His passion for learning has continued at SUNY Potsdam. In addition to his busy theatre and dance schedule, Bell also pursued a minor in speech communication. He completed a course focused on professional speaking, where he was required him to give a motivational speech. “I love public speaking! I feel like it gives me a platform to tell my story as a military child, but also tell my story in general as a person, to inspire other people,” he said.

The summer before Bell's senior year he worked in Maine as a social media marketer and photographer at Celebration Barn Theater, an internship that Associate Professor Kimberly Bouchard helped him line up. He completely immersed himself in the day-to-day operations of the company, which focuses on physical theatre, the same field Bell hopes to pursue after graduation.

Bell graduated from SUNY Potsdam in May of 2020 and headed to New York City to become an acting student in the Neighborhood Playhouse School of the Theatre in Manhattan.