After getting her Master of Music degree in vocal performance from SUNY Potsdam’s Crane School of Music, Melanie Shank ’16 landed a job at the most prestigious performing arts center in the world. From 2017 to 2020, Shank worked as the executive assistant to the vice president of concert halls and operations at Lincoln Center for the Performing Arts.

“My boss sometimes tells me my job is to bend space and time. And I have to remind him that that’s not actually possible,” Shank joked.

Shank helped to oversee logistics and operations at Lincoln Center for the 1.5-million-square-foot campus which is the home to 11 different constituent organizations, including the New York Philharmonic and New York City Ballet. They handled everything from front and back of house operations and venue sales, to construction and engineering projects. If it snows, her office handled the plowing.

“Those are all things that got coordinated out of our department. A lot of operations are closely connected to the concert halls world, because they’re doing things all over the campus. It’s really interesting to see how quickly things can come together, these huge events,” she said.

As her boss continued to take on more responsibilities, Shank did the same. She managed his shifting schedule, coordinating 35 to 40 meetings a week for him, and prioritizing his time to address urgent issues that arose. Shank also created and coordinates annual budget meetings, compiling raw material into easily understandable slides.

“In a sense, my job is to deploy my boss in the most effective way possible. I know how he thinks to a degree,” she said. “A lot of times, I’m the first person that people can bounce ideas off of. So, if I can answer the question, or direct them to the right person so it doesn’t have to get to him, then that’s me doing my job.  Some things have to go through him, but that’s also for me to figure out.”

Her appreciation for the Lincoln Center for the Performing Arts stems from her years of dedication to vocal performance. She started singing lessons when she was 13 years old, and then years later got degrees in vocal performance and psychology from the University at Albany, before receiving her Master of Music in vocal performance from SUNY Potsdam’s Crane School of Music. 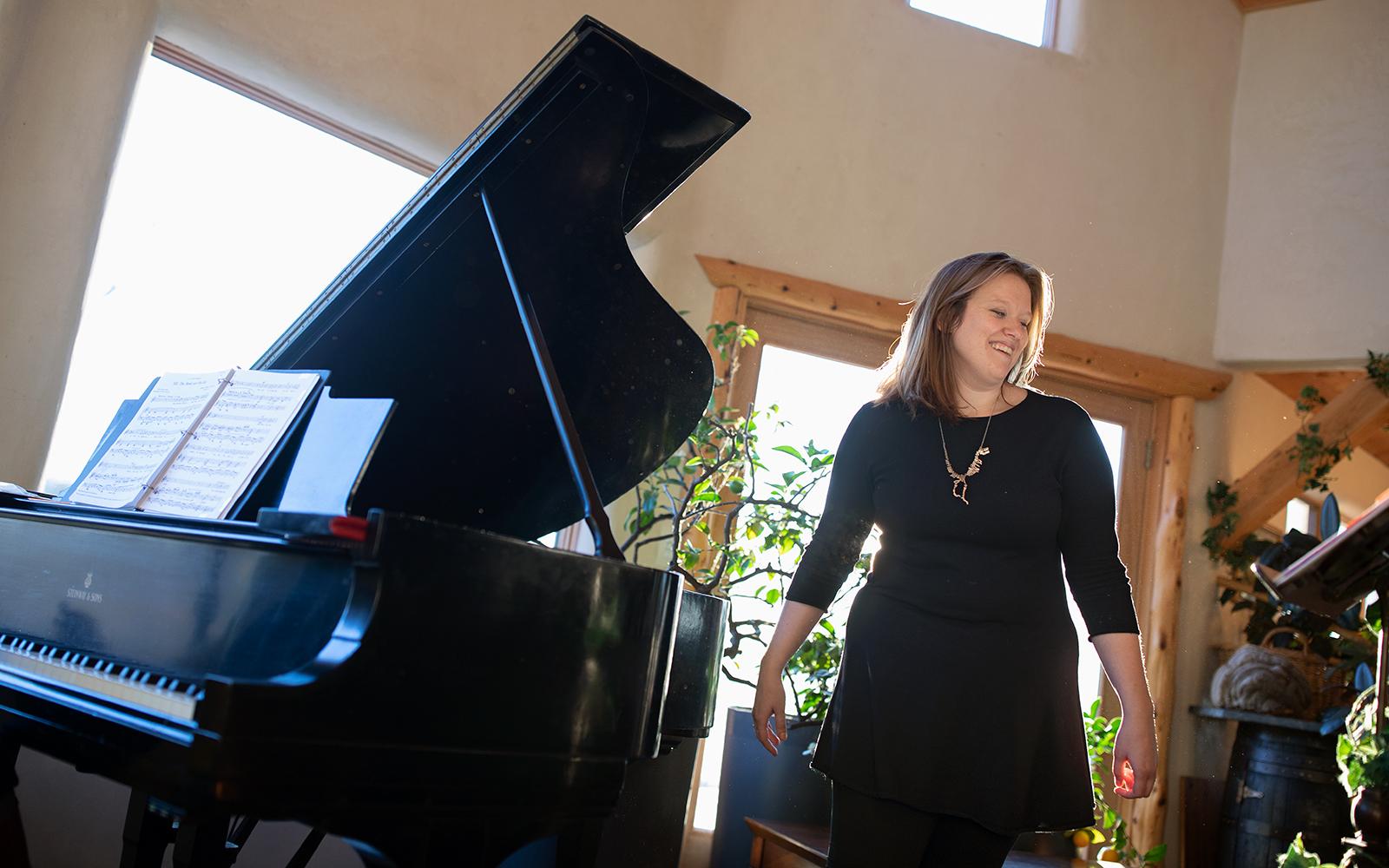 When she decided to attend Crane, it was because of Deborah Massell, an outstanding associate professor of voice at the College. “She’s really the reason why I came to Potsdam,” Shank said. “She’s amazing! She’s someone who I’ve felt very comfortable being candid with about things in my life. There were a lot of changes to my technique, but I always felt very comfortable in that space. Every lesson, you come out with just so much to think about and process.”

The graduate program gave her a lot of flexibility to take undergraduate courses and do additional work to elevate it to the graduate level, something she did during a Renaissance music class. “My professor gave me some other extra assignments and in-depth projects,” she said. “There are amazing professors at Crane. I took a class with Dr. Gary Busch, and I think that was the best class that I’ve taken in my entire college career. It was seminar-style class about the Romantic period of music. He’s great.”

While at Crane, Shank was cast in the Crane Opera Ensemble’s production of “Quilters,” a musical with 16 different scenes that correlated to patches on a quilt made by a local artist. The musical gave her a chance to sing at concert halls around the North Country, including the Pendragon Theater in Saranac Lake and the Clayton Opera House. “It was very much a whirlwind! We got back from the Clayton Opera House and they were like, ‘Ok, be back here in six hours because we’re going to the next one,’” she said.

After graduating from SUNY Potsdam, Shank made her way to New York City. Despite busy days at Lincoln Center, she always made time for her craft. She continued to take private voice lessons in Manhattan, and often practiced early in the early morning before work. All of her hard work has led to performance opportunities around the city and beyond. One of those was with an organization called Sing for Hope. “There are pianos around the city, and they do pop-up concerts where they bring art to places like schools and nursing homes. It’s a really cool organization, and I was able to sing in one of their concerts,” she said.

Shank is now preparing for a recital where she will be incorporating art and song into one performance. “I’ve recently gotten excited about living composers. When I first got to the city, I went to the Metropolitan Museum of Art a lot. It was a place I always loved. There were certain paintings that I looked at and I would think about certain art songs,” she said.

Her next recital will feature “Eve-Song,” by Jake Heggie, a song cycle that tells the story of Eve from the Bible from her point of view. She then found a painting that connected perfectly with the work. “It was Eve by herself with her head down and crouched, and it really spoke to me,” Shank said.

The painting was by Anna Lea Merritt. She discovered some of her other paintings and decided to also match those with the works of living composers. “The more you can integrate art forms, the more you will grab people in different ways. Maybe you have someone come to the recital, not because they want to initially hear a classical soprano, but because they’re like, ‘Hey, this is a painter I haven’t heard about.’ I do think that all of the arts can be connected,” she said. 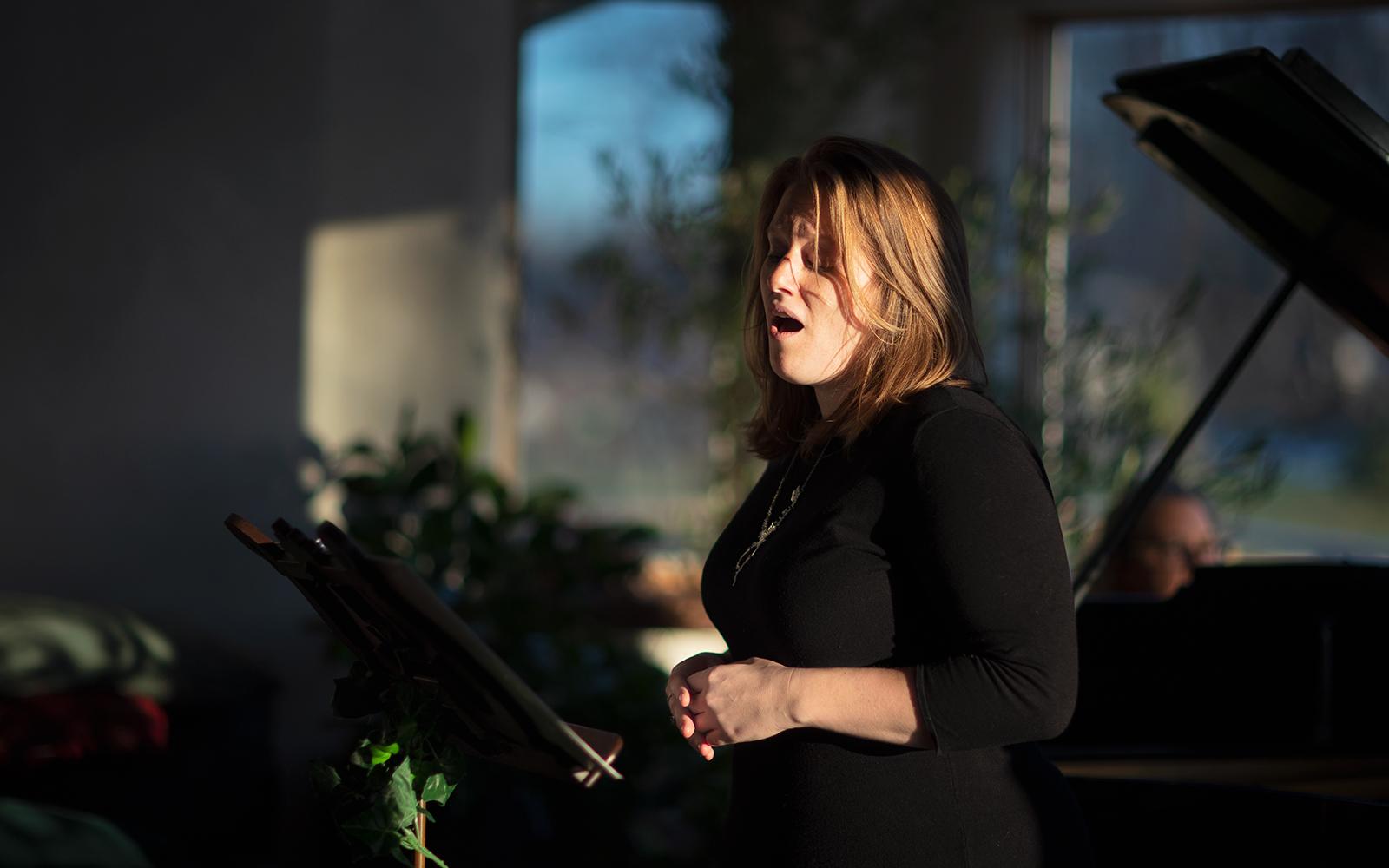 Last fall, she made the trip back to SUNY Potsdam for the third annual Potsdam Community Dog Park Benefit Concert, held at Massell’s house. Shank was one of eight Crane alumni back in Potsdam for the concert, giving her a chance to reconnect with Massell and an opportunity to build off of her work in the city. She performed “Snake,” one of the pieces from “Eve-Song.”

“Sometimes, amidst the hustle of everyday life I forget how much I truly love performing.  But when I have an experience like the benefit concert, where I’m singing for a cause I’m passionate about, it reminds me how much I love connecting with an audience,” Shank said.

Shank recently made a change to be closer to her family in Albany, N.Y.—accepting a position as the program coordinator for the Center for Experiential Education at the University at Albany. As a graduate student at SUNY Potsdam, Shank also worked in the Center for Applied Learning where she helped students lineup internships and other experiential education opportunities, training that parlayed perfectly into her new role.

“This all happened in the past month, so it's been a bit of a whirlwind! It brings me closer to my family, gives me more time for singing with the shorter commute, and builds on the graduate assistantship I had in the Center for Applied Learning at SUNY Potsdam with Toby White, who does amazing work for the students. I learned so much from him,” she said.

To learn more about The Crane School of Music, visit: https://www.potsdam.edu/academics/crane-school-music