Dr. Young-Ah Tak, one of the newest faculty members at SUNY Potsdam’s Crane School of Music, makes every effort to connect with her students on a personal level.

“Eventually I want to get to know them as a person. music involves so much expression, it’s basically who you are,” she said.

She enters Crane with an impressive background in piano performance and previous teaching experience. She received her bachelor’s degree from The Juilliard School; her Master of Music and Graduate Diploma from the New England Conservatory; and Doctor of Musical Arts from The Peabody Institute of Johns Hopkins University. She comes to Crane after teaching at Southeastern University in Florida as well as Eastern University in Pennsylvania where she founded the Eastern University Piano Festival. 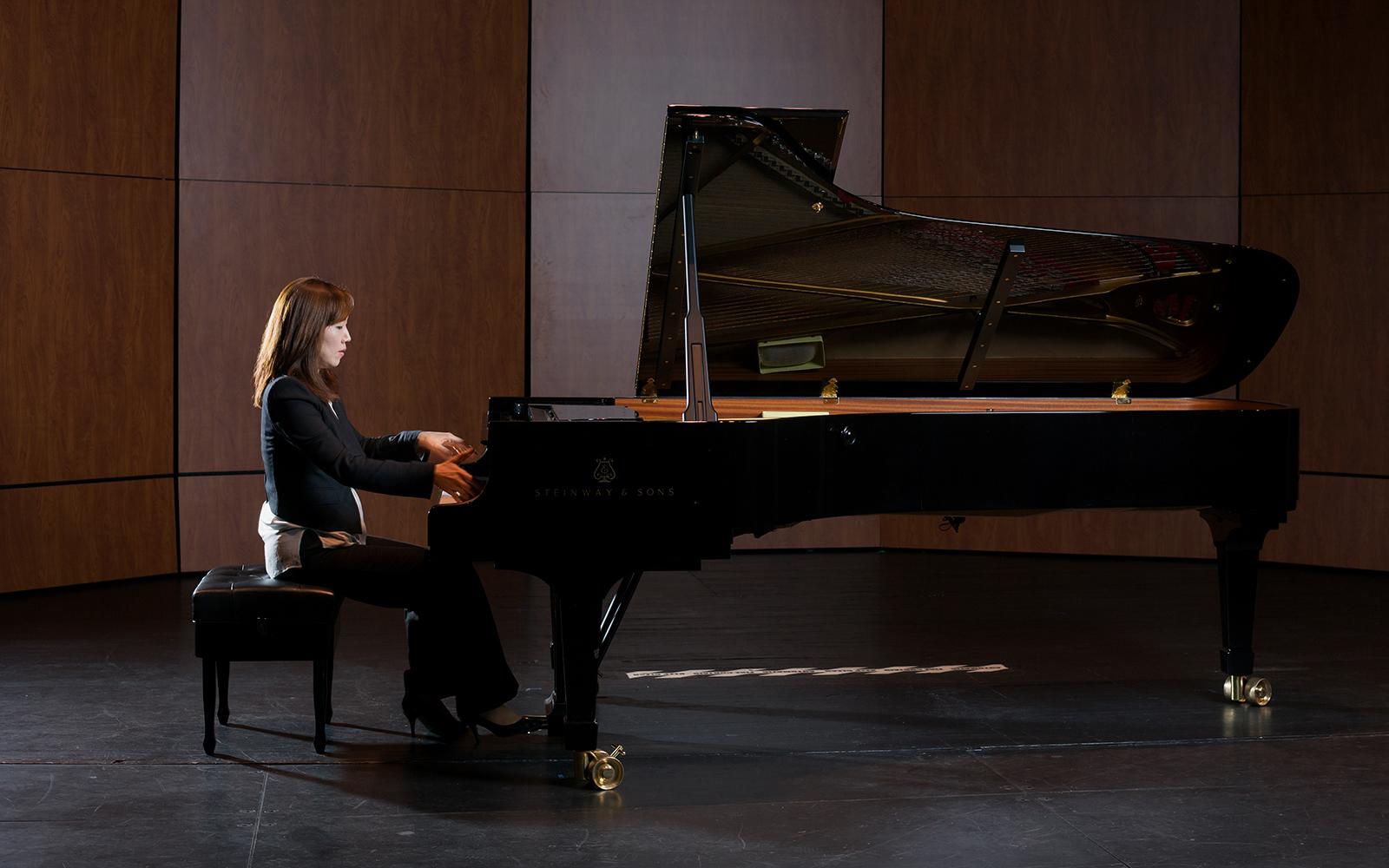 Her passion for piano developed at an early age in Busan, South Korea, playing the instrument for the first time when she was just four years old. She started getting involved in piano competitions four years later. She remembers taking the train with her parents from Busan to Seoul, South Korea, to participate in these early piano competitions. Her parents were completely supportive and never pushed her; instead, the drive and enthusiasm to be a pianist came from within. “I just had this passion and interest as a young kid on piano,” she said.

After completing elementary school, she wanted to attend Yewon, a special arts-based middle school in Seoul, and asked for her parents' blessing. “They wanted to support me because I was winning all these competitions,” she said. So, she relocated to Seoul with her mother and sister, some 200 miles away, to pursue her passion as a pianist. Her father remained in Busan and traveled to Seoul on weekends to be with her family. “My parents actually made a lot of sacrifices."

Her experience at Yewon shaped her early life as a musician. She said the school was very competitive, but in a good way. “It was very intense, but I was able to survive, because I wanted to do it. I don’t know where that drive came from,” she recalled. Yewon offered her a great education and a nurturing environment. During these formative years, she met Yong Hi Moon, who was then a visiting professor from Michigan State University working at one of the universities in Seoul. Moon was instrumental in her continued advancement as a pianist, and ultimately Tak decided to move to Lansing, Michigan, to be close to Moon and continue her musical training.

She picked up her roots and moved to the other side of the world with her mother and sister. “Without their support and help, it wouldn’t have happened. I don’t think I would have gone by myself; I was only 16." While finishing high school in Michigan she continued to play piano under the instruction of Moon as she prepared for college. Moon was one of her most influential teachers and mentors and she has maintained a close relationship with her to this day.

After being accepted into the Juilliard School, she made her New York debut at Lincoln Center’s Alice Tully Hall with the Juilliard Orchestra. From New York, she made her way to Boston to pursue graduate school at the New England Conservatory before heading to Baltimore to study under music legend Leon Fleisher at the Peabody Institute. “I was very lucky to study with him; I was lucky to have all of my teachers, they influenced me in different ways,” she reflected.

As an assistant professor in piano at the Crane School of Music, she is now the teacher. “I’ve always been interested in teaching. It’s been one of my passions.” This semester she is providing one-on-one piano instruction for 16 Crane students and teaching two chamber music groups. “It is challenging because every student is so different and I want to approach them in slightly different ways…so, whenever they come in, I have to switch my mode. Even if I’m teaching the same piece, if it’s two different people I have to approach it in different ways."

She views her role as an educator as someone who helps students find their goals and discover where they want to be. “Sometimes I feel like I’m a teacher, but I’m also like a counselor, because I need to know what they’re thinking." She tells her students to talk with her as much as they feel comfortable. “Sometimes I have to be very nurturing, like a mother figure, because they sometimes need that.”

She will be giving her first solo recital, as Crane faculty, on April 3 in Helen M. Hosmer Hall, where she will present the works of Beethoven, Schubert and Brahms. Additionally, her mentor, Yong Hi Moon, will also be making a special appearance at SUNY Potsdam in April. During her visit, she will conduct a master class for students and perform a piano recital featuring one of Beethoven’s most challenging compositions.

In December, she was invited to record for Steinway's Spirio music catalog at Steinway Hall in New York City. Tak is a Steinway Artist, and she was honored to be part of the process. Her remarkable career has taken her all over the world. She has appeared in the United States with the Imperial, Lansing, North Arkansas and Roanoke symphony orchestras. Internationally she has performed with Filharmonia Pomorska (Poland), Oltenia Philharmonic (Romania) and the Korean Symphony Orchestra.

For more information about the Crane School of Music please visit: https://www.potsdam.edu/academics/Crane