Rising Out of Darkness

Seven hundred and three miles of biking, running and swimming is not for the faint of heart. Take an Ironman—running 26.2 miles, biking 112 miles and swimming 2.4 miles—and multiple that by five. That’s what SUNY Potsdam alumnus James Wilkes ’01, ’06 & ’10 accomplished over five days in the fall of 2019 when he finished one the world’s most daunting endurance races, the Virginia Quintuple Anvil Triathlon.

“I projected that I wasn’t going to make it. I needed another hour, or hour and a half, beyond the time limit. Then something clicked. I said, ‘I have to change my mindset.’ So, I got down to probably 26 miles left and I’m like, ‘This is just another run.’ I put on my running pack. And I made it with an hour and a half to spare. I huffed it,” Wilkes said.

He kept setting new goals. Next up was the double Ironman, then the triple. Sprinkle in a few marathons in Burlington, Vt., Moab, Utah, and Las Vegas, Nev., and climbing several 14,000-foot peaks in Colorado, and Wilkes was in a league of his own. The proverbial icing on the cake was completing the Quintuple Ironman, five days of endurance that makes a single marathon look like a walk in the park. He did it all in spite of being a wounded service member—an Army veteran who sustained severe injuries while serving in Iraq.

In 2001, Wilkes graduated from SUNY Potsdam with a bachelor’s degree in biology and secondary education, completed the Army ROTC program, and then became a commissioned officer with the U.S. Army. Following the attacks on Sept. 11, 2001, he was sent down to New York City to help with the recovery efforts. First stationed at Ground Zero, he was then tasked with leading the augmented security at the Indian Point Energy Center, a nuclear power plant 36 miles north of Midtown Manhattan. Shortly after, he was deployed to Iraq.

In July 2003, while traveling through the streets of Baghdad, his convoy came under attack, and was struck by a significant improvised explosive device. Sgt. Heath McMillin, a soldier under his command, lost his life, many were injured, and Wilkes sustained a brain injury. “It was the first time we had seen something of that magnitude. It took a toll on the unit I was leading. The ringing in my head, all that stuff, I hid everything. The troops didn’t need to deal with another person who was wounded after we lost Sgt. McMillin,” he said.

Just two months later, Wilkes was hit by a grenade, the severity of which led the Army to send him home. In addition to a burst appendix and an intestinal infection, the two separate blasts had caused brain damage and significant memory loss. As he landed back on U.S. soil and exited the plane, his pregnant wife, Amy (Wood) Wilkes ’98 & ’99, was waiting for him when he stepped off the plane. “I met her at SUNY Potsdam and then pretty much remet her coming back from war—having very little memory, and not really knowing who she was,” Wilkes said. 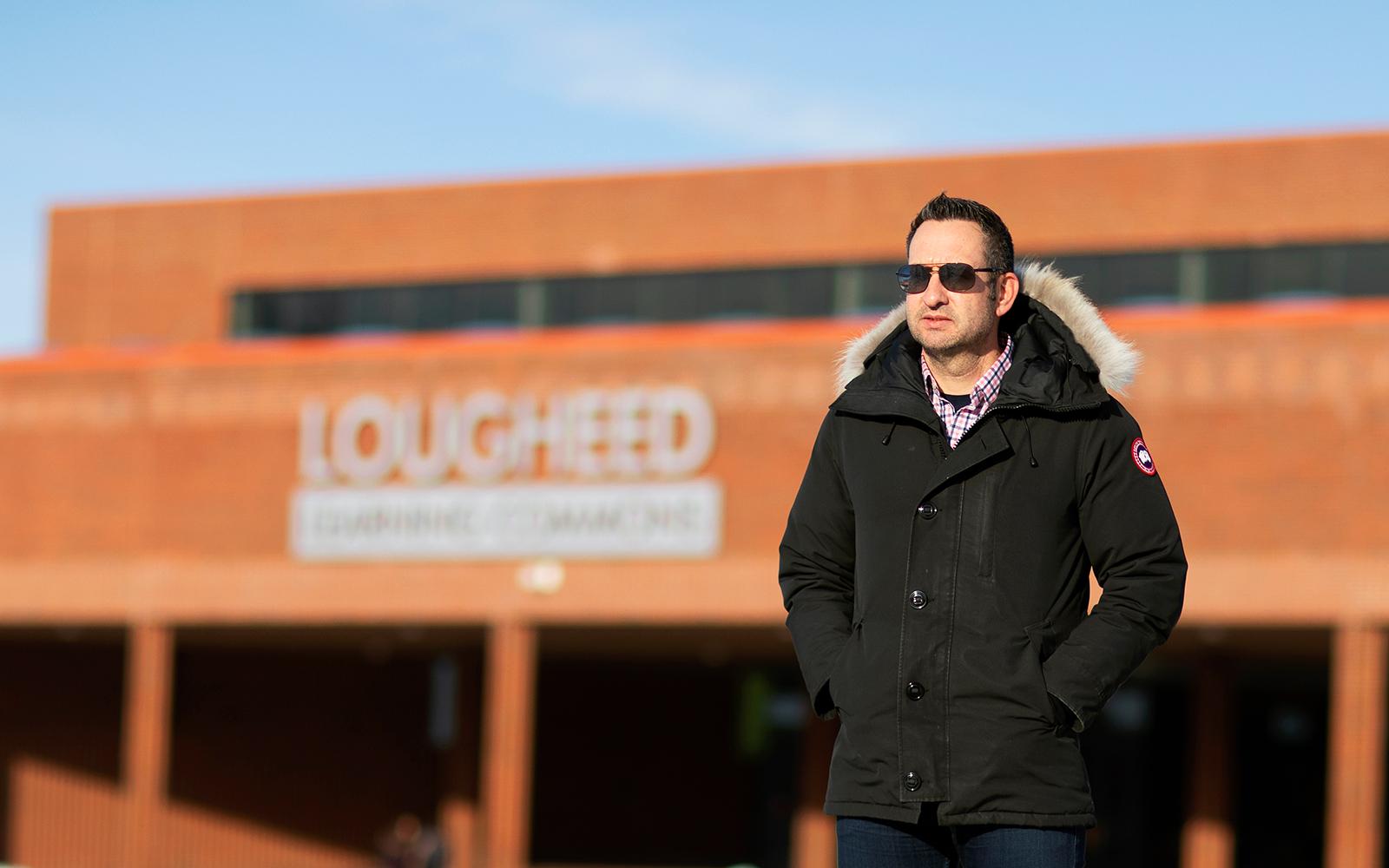 He went through a dark period of his life. Doctors overlooked his brain injury and were treating him for post-traumatic stress disorder, and other illnesses through chemotropic means. He was drinking a lot of alcohol, feeling sorry for himself, not eating well and gaining weight. The weight gain and mental instability were caused in large part by the large volumes of medications he was taking. “The responsibility of having a death on your hands and things like that really added up,” he said. “Probably about 200 suicide attempts later I found myself in Canton-Potsdam Hospital waking up with charcoal in my mouth in the ICU, and the lady goes, ‘We didn’t think you were going to make it.’”

Wilkes continued to struggle for the next six years as he grappled with the aftereffects of war and memory loss. What he also learned during that period was that he no longer knew how to read. “I forgot nearly everything I had, even my vocabulary was very limited,” he said.

Despite that, he chose to pursue a master’s degree at SUNY Potsdam in instructional technology and media. With about 70 percent of his memory gone, he took up reading Dr. Seuss and other children’s books on campus, while simultaneously pursuing his graduate studies. “I spent a lot my time in the library learning how to read on the second floor and trying to re-learn everything I lost here. I spent countless hours in Crumb Library,” Wilkes said.

In 2006, after getting his master’s degree, and still dealing with the physical and psychological effects from his time in Iraq, he turned to physical fitness as one way to deal with it. Over the next few years, he started working out at SUNY Potsdam’s Maxcy Hall Fitness Center. He met Tanya Hewitt, now the chair of SUNY Potsdam’s Department of Public Health and Human Performance. Hewitt had worked with service members in the past, and when Wilkes said that he wanted to train for a triathlon, she jumped at the opportunity to help him improve his muscular endurance, coordination and core strength. When she left on maternity leave, he continued his fitness regimen with Aimee Huto, now an adjunct instructor of exercise science and physical education at SUNY Potsdam. “Tanya and Aimee helped me do personal training to get fit and get better. They helped change my life in the physical world,” Wilkes said. 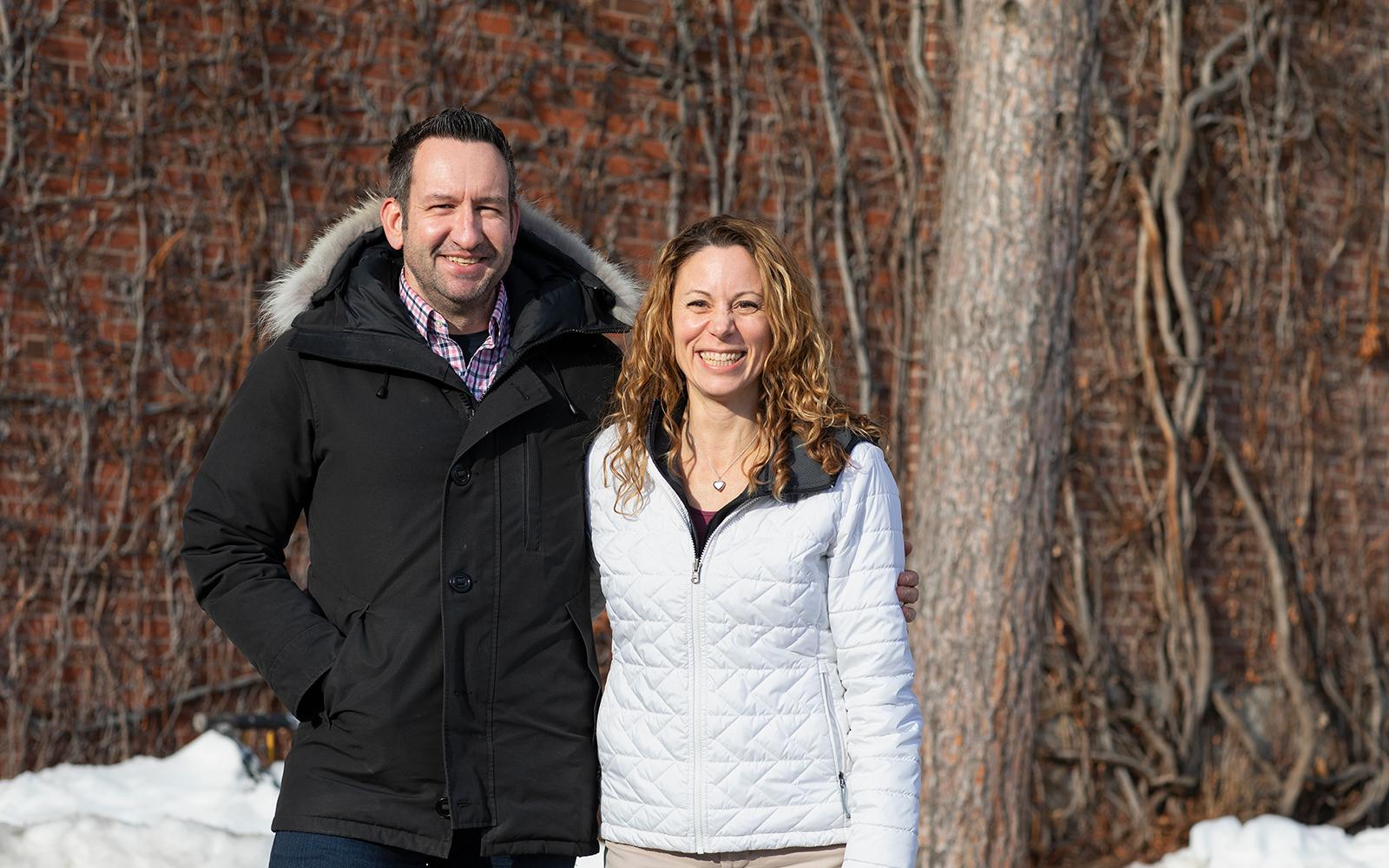 As an extension of his personal fitness goals at Maxcy Hall, Wilkes also worked with Hewitt, Jim Zalacca (SUNY Potsdam's former director of athletics), and Bryan Parker (the fitness center & pool director at SUNY Canton) to provide free access to the fitness facilities for veterans at both SUNY Potsdam and SUNY Canton. As a veteran who benefitted from increased physical fitness, the initiative was something that really resonated with him.

"Jim originally brought the idea to me. He was so positively impacted both mentally and physically by exercise, and he felt it was a critical activity that could help active duty and veterans acclimate to changes in their lives," Hewitt said. "I have been in the position to inform new members of this benefit many times and they have always shown great appreciation for the acknowledgment of their service.  In my 14 years at SUNY Potsdam, it is one of the things that I am most proud of accomplishing."

Hewitt has known Wilkes for more than a decade now. “I don’t think I’ve ever heard a story that is more heroic, tragic and redemptive,” Hewitt said. “We’ve all dealt with adversities in our lives. We all fall, but not all of us choose to rise. Jim chose, and continues to choose every single day, to rise from a set of adversities that would take most of us down. Not only has he chosen to overcome, but he has made it his mission to inspire and bring awareness to others on that same journey. I know him to be humble, compassionate, funny and extremely intelligent. I am so honored to call him my friend.”

Wilkes continued to seek out the best version of himself by enrolling in SUNY Potsdam’s business administration program—a decision that laid the groundwork for an impressive career at IBM. While pursuing a business degree he met Associate Professor David Kistler. “This guy did everything in life. He was a lawyer, he was an accountant and now he’s at SUNY Potsdam,” Wilkes said. “He challenged students. I started learning accounting from him. I think that’s where I learned my love of numbers.”

After graduating in 2010 and walking across the Commencement stage for the third time, Wilkes enrolled in Clarkson’s Master of Business Administration program, receiving 12 job offers upon graduation. IBM enticed him the most and he started working for them in 2012, something he considers one of the best decisions of his life. Wilkes got to travel around the world while working for IBM. He led Go Live integration for Germany, China and the rest of the world, rolling out SAP, a global enterprise resource planning solution.

“We took 110 years of information and digitized it into one single backbone, so we could sunset a lot of the applications and reduce the costs that we had,” Wilkes explained. “Not knowing what SAP was, it was interesting to start learning and challenge myself more. I traveled the globe. Germany, China and the U.S. were the main stops. I had a team of over 1,000 people and we were rolling. We overproduced and overdelivered.” 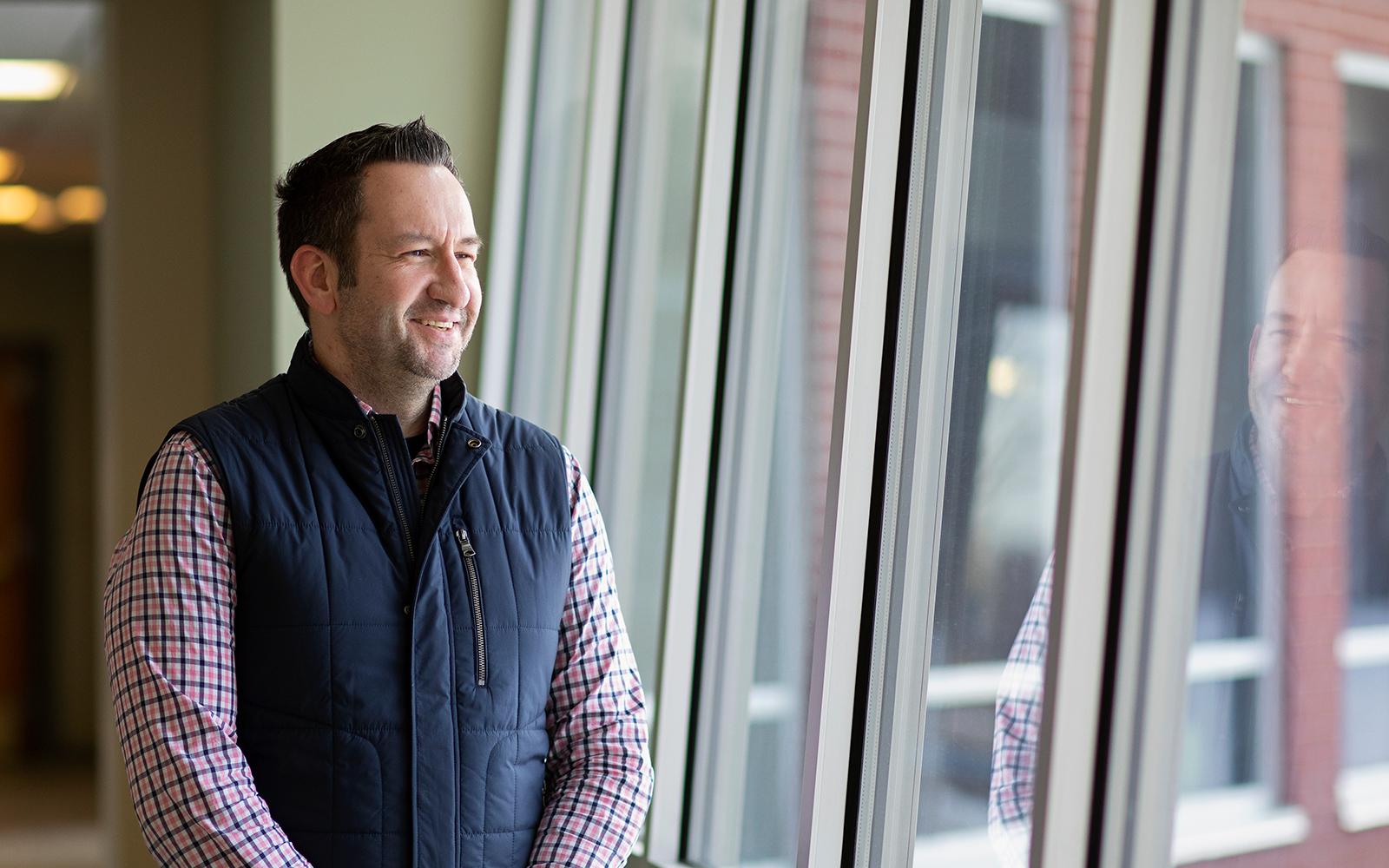 Wilkes utilized his broad skillset for a variety of projects. He helped to create IBM’s global Veterans Employment Initiative, through which the company provides security software training to service members, and creates employment opportunities for them through connections with business partners. Wilkes helped with the retail merger and acquisition between Albertsons and Safeway.

Wilkes led significant portions of the world’s largest technology, retail, and pharma mergers and acquisitions. One of his recent projects focused on helping an airline avoid ground stops due to information technology problems. Recently he worked on the discovery team for IBM’s first fiscal cloud. “We’re creating the first highly secure and dynamically compliant fiscal public cloud. Bank of America is one of our collaborators. It’s going to really change how secure software providers are to the rest of the world, and how you do banking,” he said.

Outside of the business world, he continues to set lofty goals as an ultra-distance triathlete and runner. He plans on competing in the Invictus 100 Miler marathon in Vermont this year. He also has his sights on climbing Mt. Kilimanjaro, the highest peak in Africa, competing in the World Marathon Challenge (7 marathons, 7 days, 7 continents), and climbing Mt. Everest, while continuing his quest to significantly change the world.

With every step, he proves his doubters wrong. “People didn’t have faith. Doctors said it was impossible. I had a doctor tell me I’d never be a productive member of society again! So, when you’re going back and you’re changing organizations, and you’re changing the world, how’s that for not being a productive member of society? Or when I cross the line in a Quintuple Ironman or a 100 miler, how’s that for impossible?”