“It’s been quite a journey since I left Potsdam,” Saad said during a recent visit to the College to participate in the LoKo Festival of the Arts.  After graduating from SUNY Potsdam, he continued his education at SUNY’s Fashion Institute of Technology in New York, where he took dress-making classes, and he perfected his sewing skills with a French couturier — while putting together a portfolio and interviewing for his first job in the industry.

“I was very fortunate that with my very first interview, I got an assistant design job at Donna Karan, which opened up so many doors afterward,” he said.

He oversees all aspects of the iconic Polo shirt. “I’m the gatekeeper, making sure that the colors are correct every season, the fit is right, the construction is right and that we stay true to the classic Ralph Lauren look,” Saad noted.

During this spring’s LoKo Festival of Arts, he met with students in several classes to discuss his exciting career and how the lessons he had learned could apply to their post-Potsdam lives. His basic message: “Follow your dream.”

A highlight of his return to Potsdam was a visit to a class being taught by SUNY Distinguished Professor Joseph A. Hildreth, who teaches Art Studio and Printmaking, in the same room where Joe taught Saad 29 years ago. After Saad had interacted with the students and critiqued some of their work, Joe brought out one of Saad’s prints from way back when, still in mint condition.  The subject of the print: fashion and sportswear — and it was titled, “Just Wait.”

At his main presentation in Brainerd Hall, Saad flips through a PowerPoint presentation about the team that launched women’s Polo four years ago. He also shares a cover image from Vogue magazine featuring a sweater that he designed, a beautifully detailed garment that took 70 hours to complete.

Saad hands out two colorful woolen cardigans for the students to see: The Men’s and Women’s team sweaters for the 2014 Olympic Winter Games in Sochi, Russia.  As the sweaters circulate the room and photos of the athletes are shown, he explains how proud he is to be part of the team that created these Ralph Lauren sweaters (and the 2010 uniforms). After working on the project for more than a year, including many flights to the factory in Los Angeles, he recalls his pride and emotion as our team marched into the Olympic stadium. “When the athletes came out to the arena, I was in tears,” he said. And the Ralph Lauren team is hard at work for the 2018 winter Olympic games too.

His favorite thing about working at Polo Ralph Lauren, he says, is being able to express himself creatively, a process that originated three decades ago when he was an art student at SUNY Potsdam. “I loved Potsdam,” Saad said. “When I was here I had a really good time. I enjoyed meeting amazing friends.” He also appreciated the personal connection with faculty at the College.

"A great advantage at SUNY Potsdam was being able to work one-on-one with a lot of professors.” 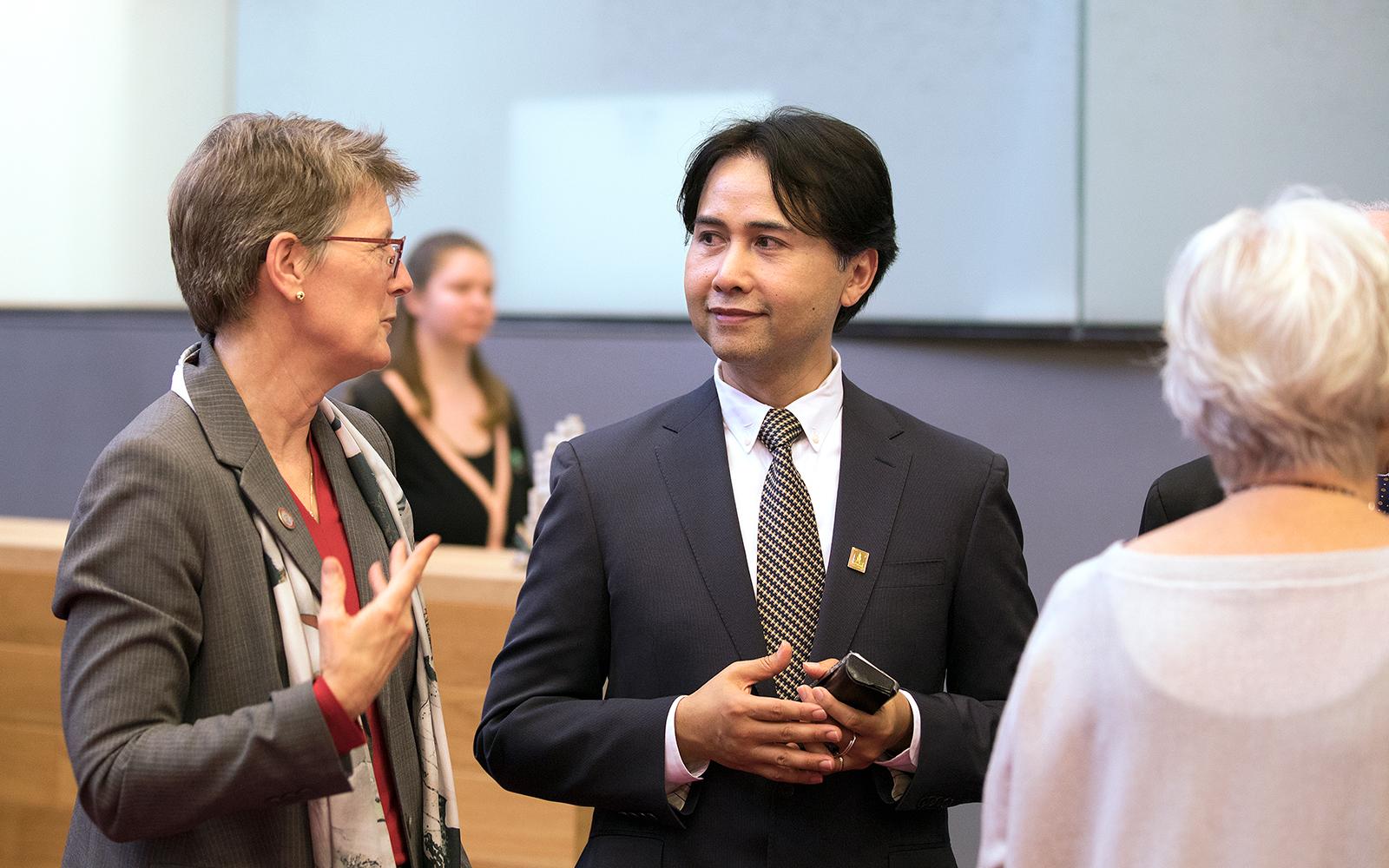 During his junior year, he participated in an exchange program with Liverpool University in England. It was there that he worked with garments for the first time, and took textile classes at Manchester Polytechnic. “That’s when I totally convinced myself that this is what I wanted to do. I love textiles, sketching, illustration — and I came back (to Potsdam) very excited the following year,” he said.

It didn’t take long after graduation for Saad to head back to New York to embark on a successful career in fashion and technical design. Now he takes an idea or concept and creates sketches that become the basis for Polo Ralph Lauren garments that are found in stores around the world.

Fifteen years ago, he became proficient in Adobe Illustrator, a program vital to his work today.  “If you want to get into some sort of design or fashion, it’s important to know Illustrator and Photoshop, trust me,” he tells the SUNY Potsdam students. “If you know those two programs you’re ahead of the game.”

His advice to current students interviewing for jobs is to avoid overconfidence or a sense of entitlement. He said they should dress presentably — don’t go into an interview wearing jeans.  And that it’s important to find out if the job is a good fit for you, as much as if you’re a good fit for the job.

“When I was going through the interview process, what I was able to do was stay calm. You’re here to find out what they do, what they can give you, what you can offer them. It’s a give-and take — it’s not just about them, or just about you.”

During his first interview at Donna Karan, he presented a portfolio of evening dresses. He remembers flipping through magazines before the interview to familiarize himself with Donna Karen’s style at the time. Without losing his own originality, he tried to evoke the mood or feeling of the Donna Karan line in his portfolio. He asked himself, “If Donna was looking at this, would she like it?”

He encourages students to be honed in on what they truly love to do. “I always believe that If you want something, go after your dream.  Don’t get sidetracked, because if that happens you can get stuck there. Go after your dream. Just do it!”