Drawing quick breaths, Elliott rises, his hands like the wings of a bird feeling its first sense of balance and with it, the surge of excitement for the flight ahead. Five steps away across the small living room on Potsdam’s Market Street, Zachary Bovee ’22 waits with hands extended for his son to cross the gulf. 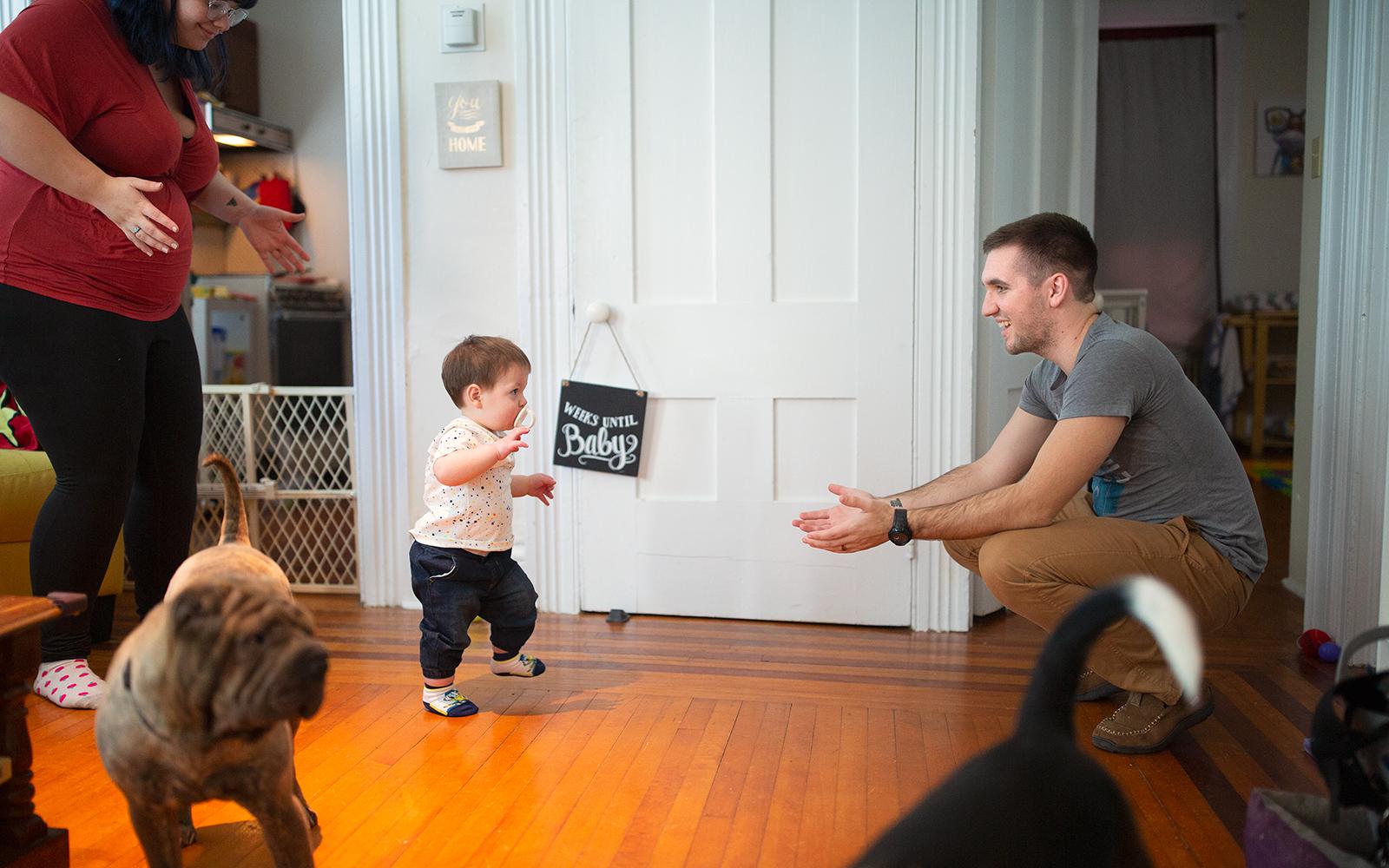 Home from the SUNY Potsdam Child Care Center where he spends each weekday, Elliott, 13 months, is practicing his first steps. From the sofa that served as his launchpad, Megan Bovee ’20 watches with pride the slow, careful placement of her son’s feet.

Her second child is due on finals week.

The Bovees are busy SUNY Potsdam undergraduates who take on the additional challenge of juggling family and employment. Zach works on weekends as a direct support professional. To hang onto two extracurricular passions that would be hard to surrender, Zach does track at 7 a.m. and frisbee at 10 p.m. Originally from Corinth, N.Y., he is working toward a bachelor’s degree that will allow him to teach high school physical education. Megan, from South Glens Falls, N.Y., is majoring in anthropology, with minors in therapeutic recreation and women’s and gender studies. She would like to pursue options in the health and social work fields after graduation.

Each week is a whirlwind of classes and life tasks. But on Wednesday morning, Zach and Elliott get cherished time together. They bundle up and head off to the Maxcy Hall Field House, where Elliott pushes a walker around, building strength and coordination, until 9 a.m. Then it’s off to daycare for Elliott and classes for Zach as the daily routine begins. 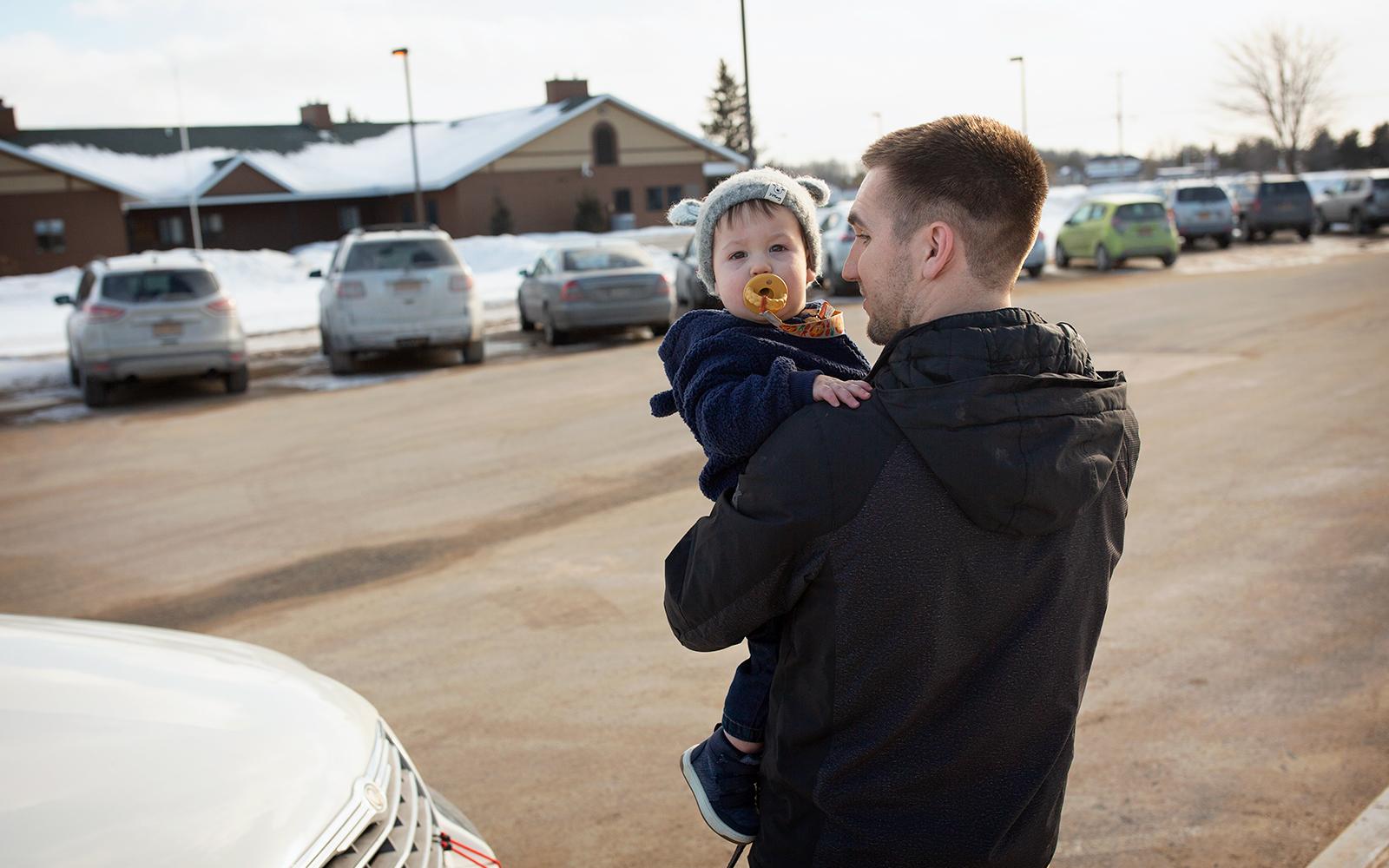 The Bovee family would have it no other way.

“At our age we’re about as energetic as we’re going to be,” Megan said. “We both always loved kids and wanted to have kids. You’ll always have something that comes up that tells you shouldn’t.”

Despite this optimism, juggling parenthood with work and studies hasn’t been easy. Megan has been tired in the evening and turns in at 9 p.m. She’s awake again with Elliott at 6:30 a.m., getting him breakfast and preparing for the day. She gave birth to him in January 2019 but could only take two weeks off from class. To help at home, Zach was able to get a week off from work. Both students saw the looming challenges and planned for them by adjusting their class schedules and taking some courses online.

“Last semester, Zach based his schedule around mine because I had classes I had to take and he was mostly completing general education requirements,” Megan said. “This semester, it’s the opposite.”

Long term, Megan would like to pursue graduate studies, but she plans to enter the workforce for a while soon after graduation.

“It makes sense for me to work until he graduates, then go back to school,” Megan said. “That way, one of us is working full time. 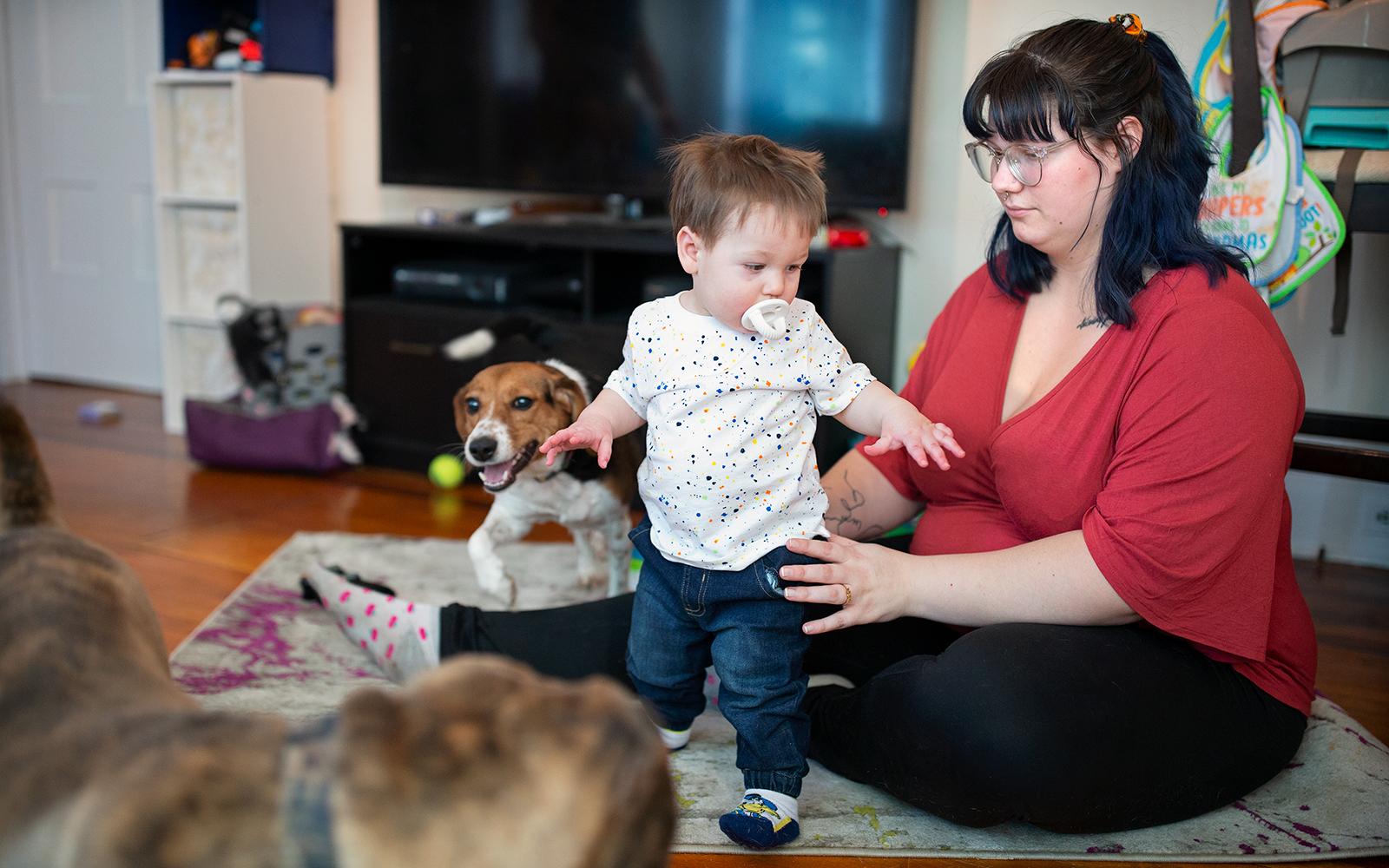 Even when they are tired, the Bovees believe the challenges they face are worth it, and that they need to work hard now to secure a positive future for themselves and their children. Their efforts are likely to yield an important range of benefits, said Lindsey Reichlin, a study director with the Institute for Women’s Policy Research.

“There is a large body of research that demonstrates the impact of college attainment on lifetime earnings and employment, on access to quality jobs with benefits like paid leave and pensions, on health outcomes, and on the chances of success for the kids of college graduates, such as improved academic and behavioral outcomes in childhood and greater chances of their going to college in adulthood,” said Reichlin, who noted that the struggles facing student parents can include not just economic barriers but also feelings of isolation.

The Bovees have not been completely alone. The SUNY Potsdam Child Care Center has been a great place for Elliott. Once he is safely tucked into the center, they can go to classes with peace of mind, Megan said. The daycare serves breakfast, lunch and snack, and provides a supervised nap, classroom time, a gymnasium, two playgrounds and an on-site kitchen and cook. It also provides infant feeding and support for breastfeeding mothers. The center is open to the community, but gives priority to SUNY Potsdam students, faculty and staff. Student parents are given the first open slots when they are available and eligible families receive tuition subsidies.

Every day, the Bovees are practicing Elliott’s steps and each afternoon he walks a little more.

“We just went through sleep training with him, so he sleeps in his own bed and through the night,” Megan said. “That will help later on. That way we’ll have the new baby sleep in our room.”

The Bovees had planned to have their newest addition on scene at the beginning of summer rather than at crunch time. It’s been working out — mostly, Megan said.

For now the focus is on Elliott, shared love, and first steps.