16 Shows, 3 Nights: SUNY Potsdam Department of Theatre & Dance Presents ‘Plays Across the Walls’ from Nov. 19 to 21

The SUNY Potsdam Department of Theatre and Dance will bring performance artists together across borders for “Plays Across the Walls”—a virtual festival reading of 16 short plays over three nights, featuring playwrights and actors from around the globe.

The free event will be presented from Thursday, Nov. 19 to Saturday, Nov. 21, with performances each night at 7:30 p.m., on the video conferencing platform Zoom. The pre-recorded performances and a live question-and-answer session will also livestream on the Department of Theatre and Dance Facebook and Instagram.

“‘Plays Across the Walls’ has been the perfect opportunity for playwrights from all walks of life to come together virtually during the pandemic and put their work on display,” said Assistant Professor of Theatre and Dance Rivka Rocchio, who started the project in May 2020 by offering a virtual playwriting workshop through Facebook, and later spent several months working closely with the playwrights on script development.

The performances allow actors, stage managers, playwrights and directors to build community and purpose-driven art, connecting students to alumni, established playwrights and actors from other universities in ways that weren’t considered before the pandemic.

“It is times like these where we need to be the most connected, and that’s where this festival comes in,” Rocchio said. “To me, this production shows the ways that we radically reimagine how communities can uplift, celebrate and heal together through performance."

Rocchio worked closely with the playwrights during months of script development to make sure their ideas and writings were polished and up to their desired standard—playwrights like Dance Aoki, born on Guam and raised in Hawaii. Aoki is a fifth-generation descendent of Japanese immigrants who worked the coffee and cane fields. Her play, “Broken Shells,” draws from that richness of heritage.

“In a world threatened by the devastation of atmospheric, historical and political storms, two women face an uncertain future,” Aoki said in describing her piece. “They must decide if their bond is strong enough to withstand ramifications of history, prejudice and an approaching typhoon.” 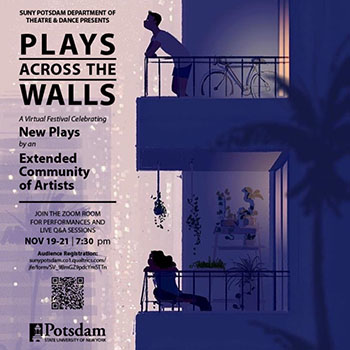 The playwrights, title of the plays and show order are as follows:

The run-time for each show is approximately 50 minutes. Each night features different performances, followed by a live question and answer session. To reserve a spot on Zoom, register here.

For more information on these performances, please contact Rivka Rocchio at rocchisr@potsdam.edu.

The SUNY Potsdam Department of Theatre and Dance cultivates an innovative, experiential, and multidisciplinary education within an inclusive community, which prepares students for leadership and service in the arts as global citizens. To learn more, visit www.potsdam.edu/theatre.

Founded in 1816, The State University of New York at Potsdam is one of only three arts campuses in the entire SUNY system. SUNY Potsdam’s arts curriculum offers the full palette: music, theatre, dance, fine arts and creative writing. No matter the discipline, people from all backgrounds can find their creative compass at Potsdam, with myriad arts immersion experiences available for both campus and community. To learn more, visit www.potsdam.edu.