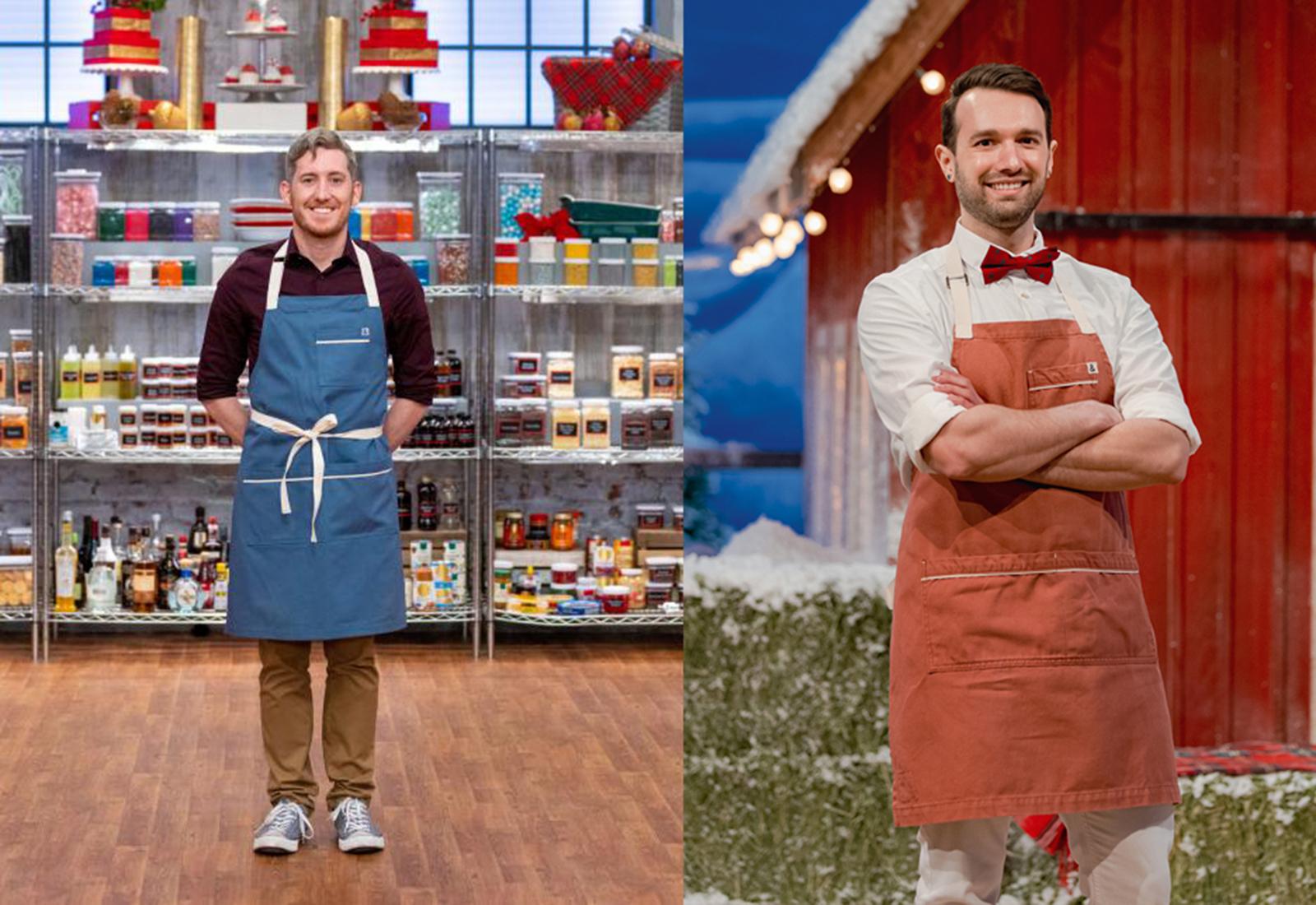 Two SUNY Potsdam alumni with a knack for baking have taken to the airwaves this season, as competitors on two different Food Network holiday shows. Both alumni are multitalented and multifaceted, juggling their baking talents with self-made careers and musical talent on top of it all.

Bill Makin ’11 is featured in season nine of “Holiday Baking Championship,” currently airing on the Food Network on Mondays at 8 p.m. EST, and streaming on Discovery+. He is one of 12 bakers from around the nation who were selected to compete for the top prize of $25,000 and the title of Holiday Baking Champion.

“As a kid, I preferred watching Julia Child and Martha Stewart cooking shows over anything—no ’90s cartoons or Disney musicals could even compare,” Makin said. “I got more serious about baking when I was an undergraduate student at SUNY Potsdam! My roommates and I would throw weekly dinners in our apartment on Bay Street and invite a guest or two (these became well-known and highly regarded around the music school). I got more and more into baking from there. Now, I bake as a way to share what I love with the people I care most about... and for judges on TV.”

So far, he’s impressed the judges with recipes like pomegranate “not so gingerbread” cheesecake, and even played his violin during the competition. He has made it through three episodes, with five left in the season, and recently got rave reviews from the judges for the best dish in the “pre-heat” challenge.

“It was stressful. It was overwhelming. It was incredible. Getting to see behind the scenes of one of my favorite shows, from one of my favorite networks was a dream come true. The pantry was amazing! Seriously, almost any and everything you could think of was in there. The producers and crew do so much to make the experience truly once in a lifetime for the competitors. I assume this is the same for most seasons, but the bakers all become an instant family to one another as we bond over this insane experience together. For me, the best part was meeting the 11 other people chosen for this season of the show. They taught me so much about pastry and brought me so much comfort and happiness during the competition,” Makin said.

A music education graduate of The Crane School of Music, Makin works as a realtor in Brooklyn, N.Y., and offers home and garden design services, and still makes time to perform as a classical violinist with the Symphony of Westchester and other orchestras. He first began baking as an undergraduate at SUNY Potsdam and later began creating his own recipes and offering his custom cookies, cakes, pastries, pies and breads for order online, along with catering services.

“I've learned over and over that if you wait until you feel ready to do something, you're likely going to miss your chance altogether,” Makin said.

Bryan Rivera ’12 is competing on Team Rebels Without A Claus on season four of “Holiday Wars,” airing now on the Food Network on Sundays at 9 p.m. EST, and streaming on Discovery+. Nine teams consisting of a cake artist, sugar artist and baker compete to win $25,000, the title of Holiday Wars Champion and the grand prize of a trip to see Iceland’s Northern Lights. One of his first bakes on the show was a cake inspired by a coquito—a coconut and rum nog—in a nod to Rivera’s Puerto Rican heritage. His team is currently in the top four.

“The show experience was wild! What made it more interesting was the fact that there were still many restrictions due to COVID at the time of filming, so it was a bit more unique in that sense. Overall, it was fun, exciting, exhausting, and full of adrenaline. I will never forget stepping onto the set for the first time—it was magical!” Rivera said. “Everyone was kind and respectful, from the film crew to the producers, judges, host and fellow competitors. This helped to make the extremely long days more enjoyable (yes we’re actually given seven hours to create our pieces, and then add on top of that time for the critiques and verdicts).”

Rivera originally came to SUNY Potsdam as a music education major at The Crane School of Music, concentrating on clarinet and oboe. He was also a performer with the award-winning collegiate a cappella group, the Potsdam Pitches.

“I ended up changing direction midway through sophomore year and graduated with a business administration degree, and a music business minor,” he said.

Today, he works as a fitness trainer and instructor for Liftonic in New York City, and is featured on both the 305Fitness and Brrn at-home fitness apps. He is also a DJ and singer on the side with The Metropolitan Players, a successful wedding band founded by fellow alumni Drew Coles ’11 and Erin Higgins Coles ’12. Rivera began baking at home during the pandemic and quickly found he had a knack for it after he began bringing a special baked good for clients following a special workout class. Rivera founded Brytown Bakes last year, offering a treat of the week for sale each week, ranging from a fall variety box to “thankful” cookie platters to a seasonal sugar cookie advent calendar set.

“Baking was my therapy—it eased my anxiety, gave me something to do, and helped to fuel my creative side,” Rivera said. “My advice is nothing new, profound or exciting: Just go for it! If you hold off waiting to be ready, you will never start because you will never truly feel ready. As you grow and time moves along, so will your brand/career. I spent the first six years of my adult working life in advertising, and completely uprooted myself when I finally decided I needed a change. To this day I am still figuring out my path, and that’s OK! But as time has passed, the vision has become more and more clear. Focus more than what makes you ‘you,’ rather than what makes you unique/different. Also don’t forget it’s OK to have fun!”

To keep up with SUNY Potsdam’s worldwide network of alumni, visit www.potsdam.edu/alumni.

Due to inclement weather, all early morning classes have been canceled at SUNY Potsdam today, Thursday, Jan. 26