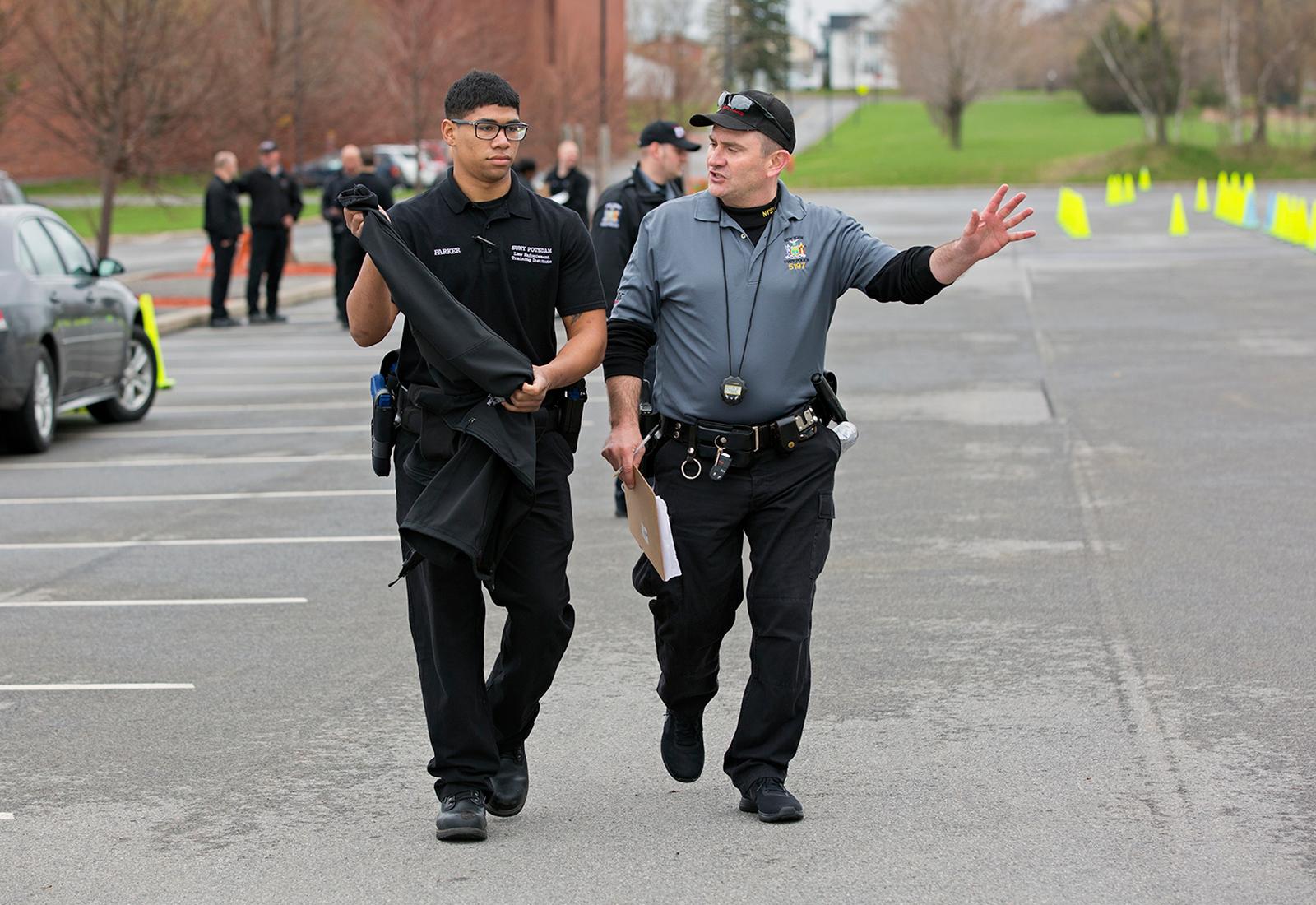 SUNY Potsdam’s Law Enforcement Training Institute recognized the graduates of its Fall 2021 police academy with a ceremony on campus, held on Dec. 18.

The cohort of nine cadets graduated from the 15-week program after successfully completing Phase 1 of the New York State Municipal Basic Police Training, which includes 56 of the full 60 components, in Fall 2021. Phase 2, which comprises the final four components, can only be completed by recently hired officers.

The Law Enforcement Training Institute at SUNY Potsdam provides students with the unique opportunity to complete a rigorous pre-employment, state-approved police training as part of their undergraduate curriculum.

"These nine college students are considered pre-employment trained, which means municipal agencies may hire these trainees off their civil service lists and save thousands of dollars. In some cases, as much as $20,000 to $30,000. They are simply already police trained. In other instances, where cadets opt to go into other branches of law enforcement, they have made themselves that much more marketable as they now have a police academy on their resume. This has a plethora of value. This year alone, we have had cadets offered positions with Suffolk County Police, Syracuse Police, NYPD, Ithaca Police, the St. Lawrence County Sheriff's Office, Oswego City Police, Federal and State Corrections, New York State Police, Washington DC Capitol Police, and a police department in Pennsylvania," said Police Academy Director Sonny Duquette, a retired St. Lawrence County Sheriff's Office Detective Sergeant.

SUNY Potsdam offers one of the very few police academies in New York State that opts to prioritize seating to college students first, then fill any leftover seating with hired officers.

"This was something I wanted to do here, and the College's Lougheed Center for Applied Learning fully supports it. With my 31 years of policing and training, I firmly believe policing needs better trained officers. When cadets graduate here, they have a four-year degree and a police academy under their belts. They are better trained, better educated, and more mature. It simply makes for better decision-making skills, which in turn makes for better community policing. We need more of that, and we all know it," Duquette said.

In order to be eligible for the SUNY Potsdam Law Enforcement Training Institute, candidates must be a junior or senior in their undergraduate studies, have a minimum of a 2.5 grade point average and possess a driver's license. Community members or students from other institutions may contact the Office of Transfer Admissions to discuss their eligibility for the program by visiting http://www.potsdam.edu/admissions/transfer.

The SUNY Potsdam Law Enforcement Training Institute is cosponsored by the Department of Sociology and Criminal Justice and the Lougheed Center for Applied Learning.

The SUNY Potsdam Criminal Justice Studies Program provides a broad interdisciplinary liberal arts orientation, with course requirements in philosophy, politics and sociology, and the opportunity for students to elect to study courses in anthropology, chemistry and psychology. The SUNY Potsdam Department of Sociology offers both a major and a minor in criminal justice studies. For more information, visit http://www.potsdam.edu/academics/AAS/Soci.