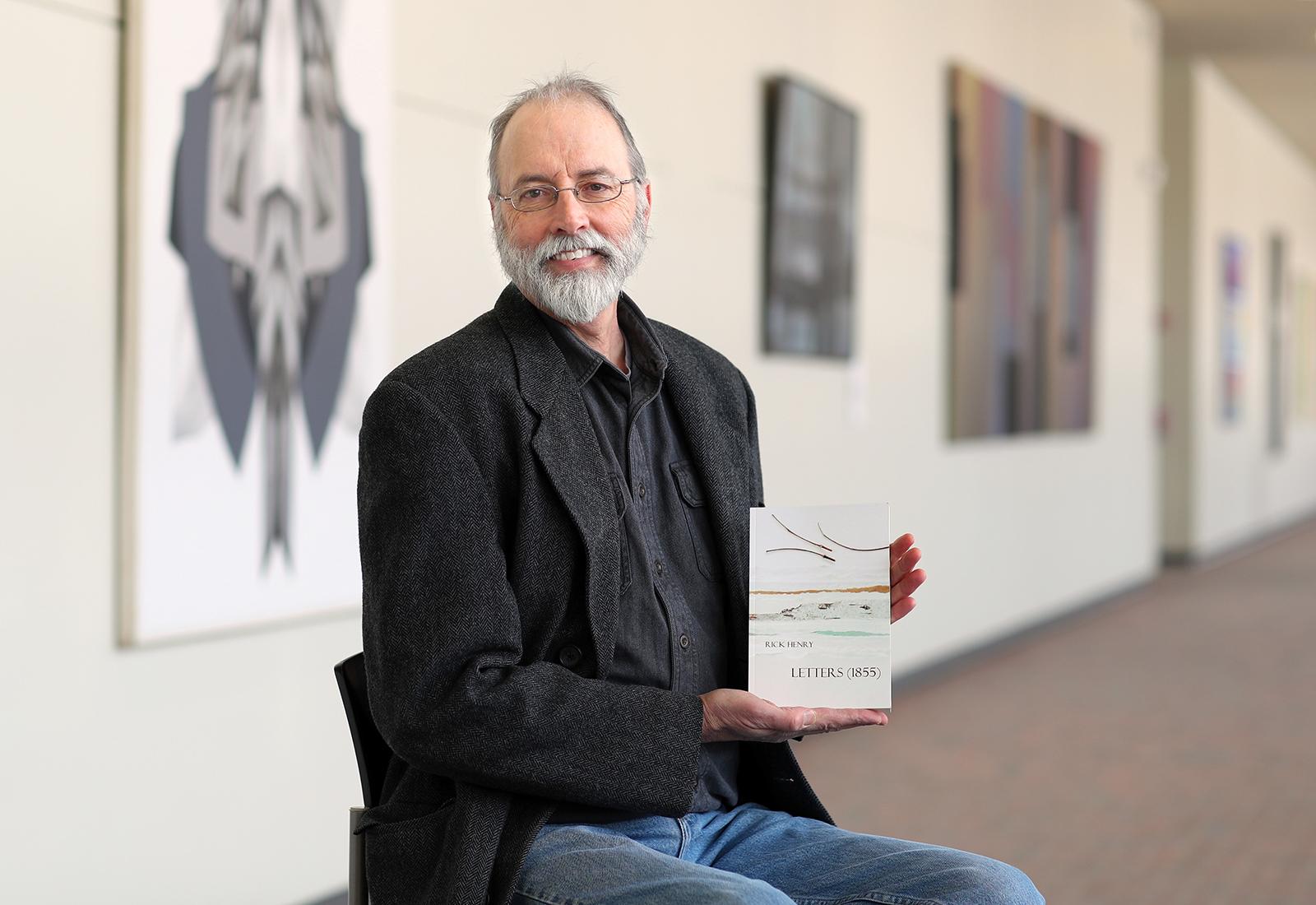 Henry holds a copy of “Letters” during a photo shoot on campus in 2019.

In Dr. Rick Henry’s latest novella set in a fictional upstate New York town, the theme is deceptively simple: Colleen O’Shea sits in the park, assigned to count the vehicles driving through a rural town in 1933. Her count is interrupted by friends, secrets and an unplanned pregnancy.

Deeper layers of “Colleen’s Count” reveal that O’Shea, a woman in her thirties, is debating abortion. Her husband has abandoned her with two children and she has a son out of wedlock. The bank will not hire her, because “women can’t count.” In the novella, Henry returns to the fictional landscape of Homer, N.Y., a land littered with fractured dreams and commonplace realities — a milieu which has anchored many of his musings over a teaching career at SUNY Potsdam spanning nearly a quarter century.

“Colleen gets it, the bias and the hypocrisy. This is partly why she’s pretty cavalier about miscounting,” says Henry, who directs the SUNY Potsdam Bachelor of Fine Arts (BFA) program in creative writing.

Set for release on Oct. 16 from Finishing Line Press, the press run for “Colleen’s Count” will be based on preorders, a period which runs through most of August, Henry said. The book and others by the same author can be ordered on his website: https://www.rickhenry.net.

Colleen’s story — her eventual decision to have an abortion, the long recovery— travels alongside and sometimes weaves with the settings of Henry’s previous novels and story collections. Among them:

A prolific creator, Henry has, by his own estimate, more than 30 projects in motion at one time. His work suggests a fierce independence seasoned by the Central New York winters he still relishes.

“I love the histories. The Yankees. The Erie Canal. The literature. The land,” Henry says. “The weather — except for 85-plus temperatures. My grandparents and families on my mother’s side were from the Utica area. I spent my early childhood outside/north of Schenectady. My parents apparently took turns visiting my elementary school teachers — I had a low tolerance for BS and, apparently, the teachers didn't like the stories I told.”

About the author: In addition to “Letters” and “Lucy's Eggs,” Rick Henry has published a recent collection of prose poems, “Then,” two novellas, “Chant” and “Sidewalk Portrait: Fifty-fourth Floor and Falling,” and “Snow Fleas.” Henry has been a professor of English at SUNY Potsdam since 1997, where he teaches literature, linguistics, writing, and directs the BFA in Creative writing program. He earned his Ph.D. from the University of Minnesota, MFA in fiction from Bowling Green State University and his bachelor’s degree from St. Lawrence University.

About SUNY Potsdam: Founded in 1816, The State University of New York at Potsdam is one of America’s first 50 colleges—and the oldest institution within SUNY. Now in its third century, SUNY Potsdam is distinguished by a legacy of pioneering programs and educational excellence. The College currently enrolls approximately 3,600 undergraduate and graduate students. Home to the world-renowned Crane School of Music, SUNY Potsdam is known for its challenging liberal arts and sciences core, distinction in teacher training and culture of creativity. To learn more, visit www.potsdam.edu.