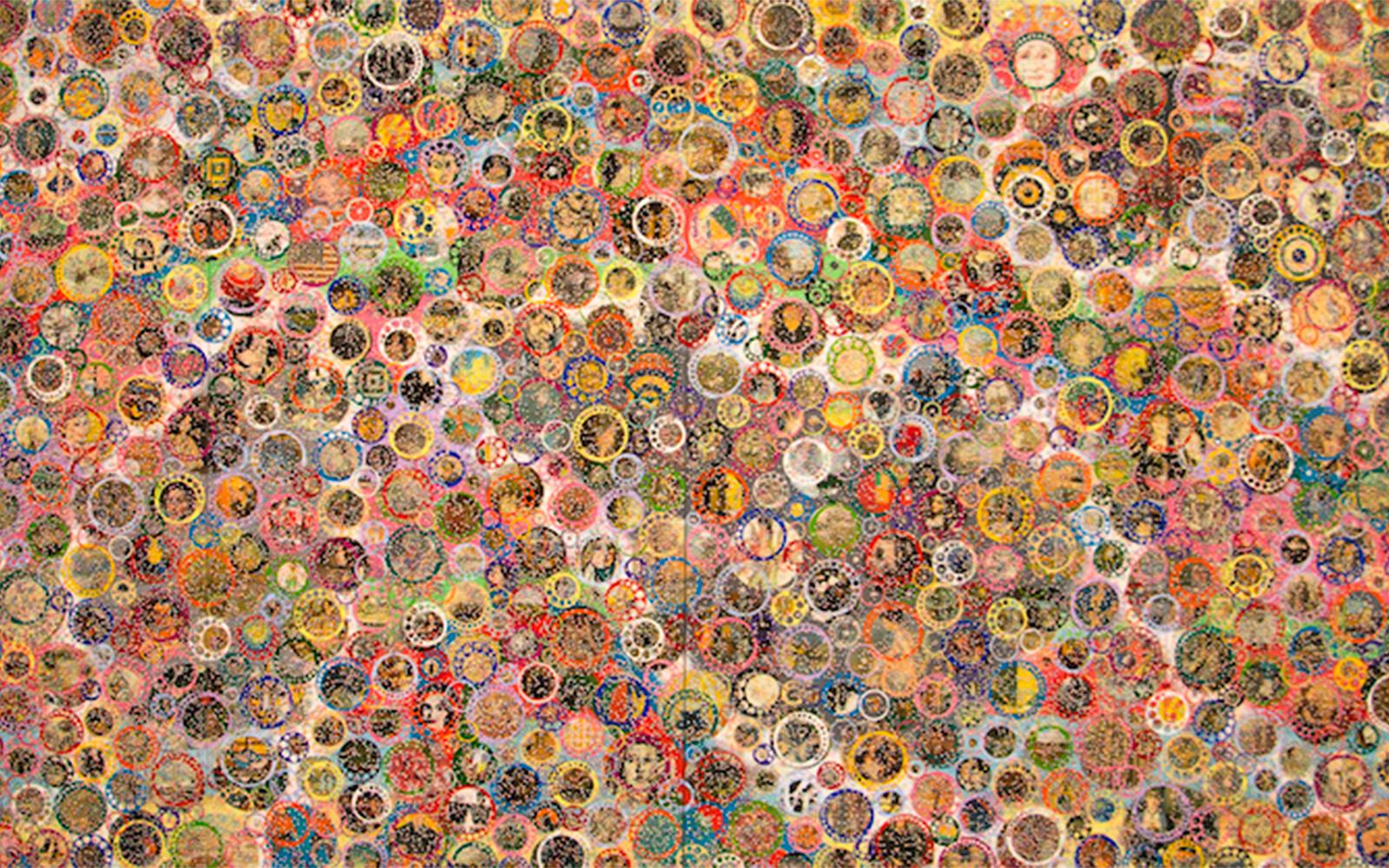 The large painting “Perception” by the Japanese artist Nobu Fukui will be on display in the “New Works and Old Friends” exhibition at SUNY Potsdam’s Gibson Gallery, running from Feb. 13 to March 28.

The Art Museum at SUNY Potsdam will unveil paintings by the Japanese modern and contemporary artist Nobu Fukui in a new exhibition at the Roland Gibson Gallery. Older works by Fukui, which have been part of the Museum’s Japanese Collection for decades will be complemented by his large, vibrant and visually exciting new pieces, including a mixed-media painting titled “Perception,” which has never before been viewed publicly.

The show, “New Works and Old Friends,” opens Thursday, Feb. 13 at 5 p.m., with an artist reception to be held until 7 p.m. The exhibition will be on display until March 28, with regular hours while campus is in session and viewing by appointment only during campus breaks.

Visitors to the Gibson Gallery can expect collage-based painting and imagery dense with color and dimension, drawing particularly on Fukui’s passion for anime, manga and cartoons. They will be able to reflect on the progression of his work, with large and newer efforts filling the Main Gallery and Balcony Gallery, juxtaposed against earlier pieces which will be on display in the Brick Gallery, said SUNY Potsdam Collections Manager Romi Sebald ’85.

The pieces will transform the space into a massive pattern itself, said Sebald.

“There is a lot of pop culture and iconography,” she said. “The more you look at it, the more you see… There is so much of a finished product in each element of patterning. It just draws you into this vast space.”

The artist, born in 1942, will be on hand to help install the exhibit along with his wife. Fukui will be at the opening reception and happy to answer questions.

For more information about the latest shows at the Gibson Gallery, visit http://www.potsdam.edu/museum/exhibits/gibson/upcoming.

Admission to the Gibson Gallery, located at Brainerd Hall, is free, and the exhibition space is wheelchair-accessible. The Art Museum is open to the public from 1 to 7 p.m. from Tuesday to Thursday, and from 1 to 5 p.m. on Friday and Saturday. Additional hours are also available by appointment.

The Art Museum at SUNY Potsdam serves as the center for visual arts at the College, and encompasses all of the collections found throughout campus, including in the Gibson Gallery. The Museum is dedicated to the exhibition and interpretation of quality works of art, and its collection includes significant artworks from the 20th and 21st centuries, as well as earlier pieces. The mission of The Art Museum at The State University of New York at Potsdam is to make direct experience of the visual arts accessible to students, faculty, staff and alumni of the College, as well as to residents of Northern New York.

About SUNY Potsdam:
Founded in 1816, The State University of New York at Potsdam is one of only three arts campuses in the entire SUNY system. SUNY Potsdam’s arts curriculum offers the full palette: music, theatre, dance, fine arts and creative writing. No matter the discipline, people from all backgrounds can find their creative compass at Potsdam, with myriad arts immersion experiences available for both campus and community.

Due to inclement weather, all early morning classes have been canceled at SUNY Potsdam today Thursday, February 27