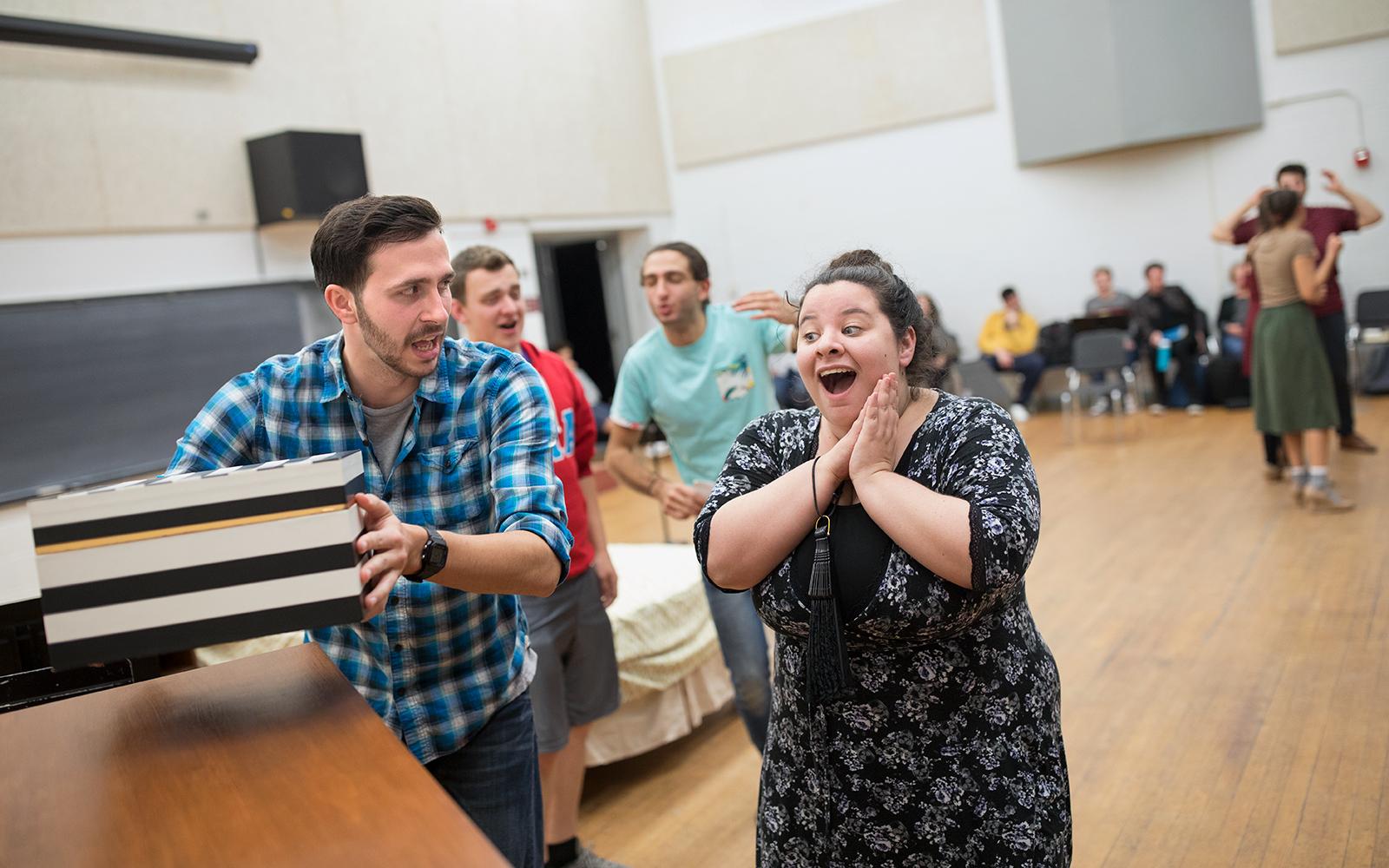 The opera, sung in Italian with English supertitles projected over the stage, will be presented at 7:30 p.m. on both Friday and Saturday, Nov. 8 and 9, in the Sara M. Snell Music Theater.

Based on the revolutionary French play by Beaumarchais with a libretto by Lorenzo Da Ponte, the opera features comic situations and a brilliant, tuneful score that continues to delight audiences centuries after the first performance in Vienna in 1786.

The Crane Opera Ensemble production has been updated from its traditional setting to a 1950s resort hotel, which was designed by Bruno-Pierre Houle. Returning for another collaboration with the Crane Opera Ensemble is lighting designer E. Tonry Lathroum. The resort-wear fashion is designed by SUNY Potsdam Associate Professor of Costume Design and History Janet Sussman.

“I was delighted when we decided to set the play in the late 1950s, when women were also beginning to come together to change their world. This period allowed us to explore the fashions that evolved from the heritage of these strong women,” Sussman said.

Dr. Joshua Miller, the new director of opera at The Crane School of Music, will give a free pre-show lecture on “Updating Mozart” for ticket holders each evening, starting at 6:45 p.m. in the theatre prior to the show.

“As a lover of the hit TV series ‘Mad Men,’ I’ve always seen a strong connection between the characters in the iconic TV show and the characters in the Beaumarchais plays—their struggles navigating, even climbing between, class systems and their relationship struggles. Much like Don Draper seducing the secretaries in his office, in the opera we experience strong women coming together to outwit the men in their lives, themes we can easily relate to the modern day ‘me too’ movement,” Miller said.

Led by visiting Guest Conductor Michelle Rofrano, the all-student Crane Opera Ensemble cast and orchestra will come together, with the brilliant students from the SUNY Potsdam Department of Theatre and Dance providing all of the behind-the-scenes technical elements.

About the director and conductor:

Dr. Josh Miller joins the Crane faculty after having recently directed Leonard Bernstein's “Mass” with the Austin Symphony, Ballet Austin and the Grammy-winning choral ensemble, Conspirare. Other recent productions include “Suor Angelica,” “Gianni Schicchi,” Benjamin Britten’s “The Turn of the Screw,” “La Bohème” and “Le Nozze di Figaro,” with both Virginia Tech and the University of Texas at Austin. Dr. Miller has served on the directing staffs of the Glimmerglass Festival, Alamo City Opera, Wolf Trap Opera, Fort Worth Opera, Palm Beach Opera, Virginia Opera and Austin Shakespeare. He will return to St. Petersburg Opera this summer to direct Donizetti’s “Daughter of the Regiment.”

Maestra Michelle Rofrano has led productions of “The Queen of Spades” and “Trouble in Tahiti” with the Glimmerglass Festival; “Trouble in Tahiti,” “Service Provider,” “Avow” and “A Flourish of Green” with Westminster Choir College; “Così Fan Tutte” and “The Turn of the Screw” with DC Public Opera; “Così Fan Tutte” with the Oberlin in Italy Opera Festival; “Suor Angelica” with the New Jersey Opera Project, and “Le Nozze di Figaro” with the Peabody Conservatory. She previously served as assistant conductor for productions of “La Bohème” and “Le Nozze di Figaro” with Florida Grand Opera; “The Cunning Little Vixen,” “La Traviata,” “Blue” and “Silent Night” with the Glimmerglass Festival; “Eugene Onegin” and “Salome” with Spoleto Festival U.S., and “La Bohème” with Opera Birmingham. Upcoming engagements include conducting the world premiere of “Marie Begins” at Tri-Cities Opera, and serving as cover conductor for “Madama Butterfly,” “Il Matrimonio Segreto” and “Rigoletto” with Florida Grand Opera.

Tickets for the Crane Opera Ensemble production of “The Marriage of Figaro” are $15 for the general public, and $10 for SUNY Potsdam faculty, staff and students. To purchase tickets, contact the Community Performance Series Box Office, located in the lobby of SUNY Potsdam's Performing Arts Center, by calling (315) 267-2277 or visiting www.cpspotsdam.org.

The award-winning Crane Opera Ensemble is a significant source for opera and music theatre in the North Country region of New York State. The ensemble provides exciting opportunities for students to experience all facets of opera performance and production, through rehearsals, coaching and classes related to performance practices and production techniques. The ensemble’s productions have garnered awards from the National Opera Association (2015, 2010, 2009, 2008, 2003), The American Prize (2011, 2017), and the Kennedy Center American College Theatre Festival (2010). To learn more, visit https://www.potsdam.edu/academics/Crane/opera.