Getting Hands Around a Pretty-in-Purple Threat 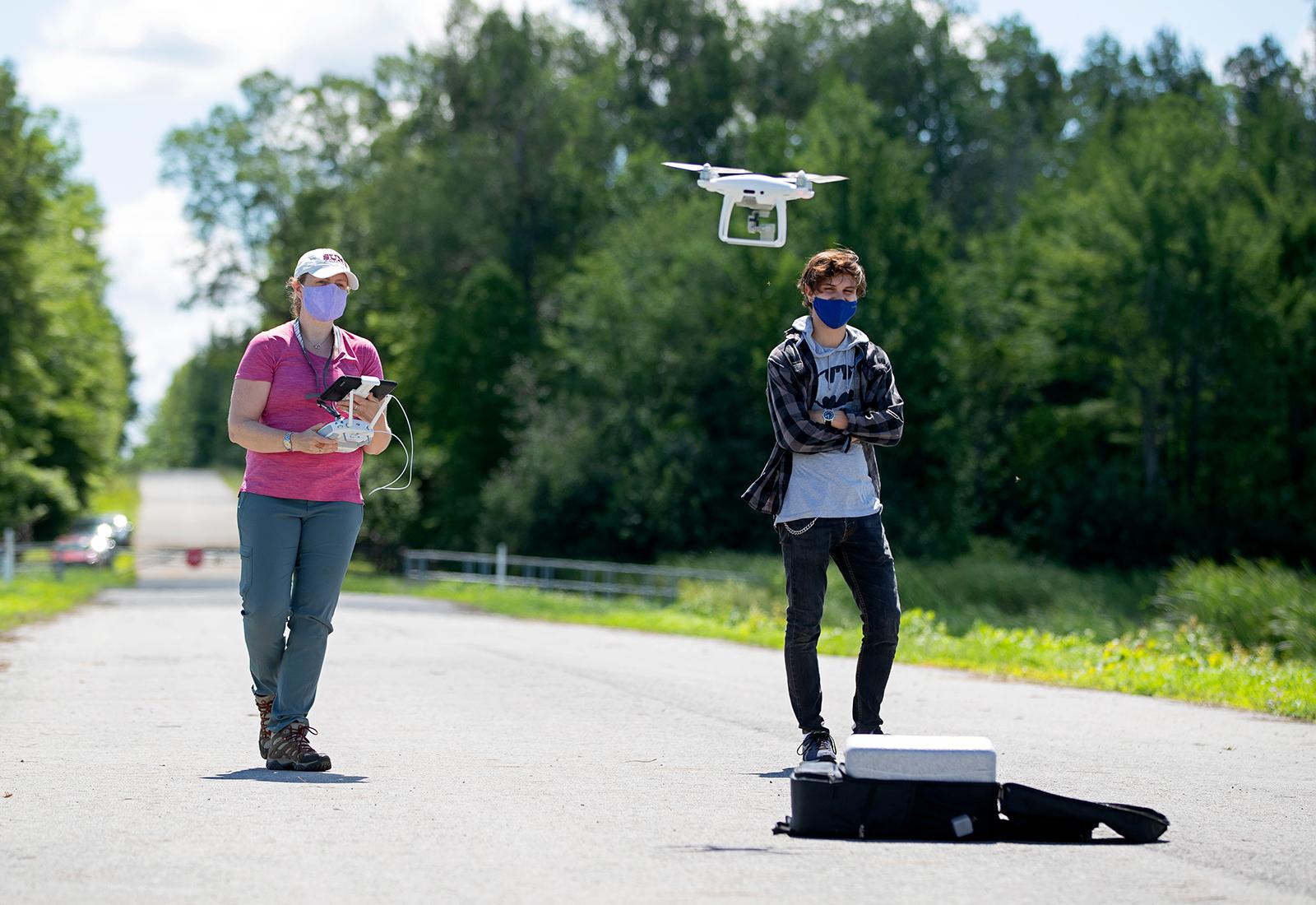 Purple loosestrife — if you live in the Northeast, chances are you’ve seen it growing along the roads, and you may even have thought its purple spires were a thing of beauty. SUNY Potsdam Professor Dr. Jessica Rogers is passionate about the flower — but not in the way you might think.

Rogers has spent the past three years with this invasive species, documenting hundreds of areas in Northern New York infested by the weed, which can swallow wetlands and drive out the species that depend on them. She has introduced thousands of beetles which dine on loosestrife foliage, and now, Rogers thinks she understands enough about the plant to offer a two-pronged solution involving the beetles and altered mowing practices.

This week, Rogers and her team used a drone for the first time to document just how far the weed is reaching into the Wilson Hill Wildlife Management Area near the St. Lawrence River, adding to three years of work trudging and surveying more than 200 miles of North Country roadways. The news so far, across 700 infestation sites from Massena to South Colton and east to Alexandra Bay, has been sobering.

“Ultimately, it will flood through here and take over everything, replacing these cattails,” Rogers said. “If we do nothing, in 10 years this won’t be a wetland; it will be a dry loosestrife field. Goodbye wetlands, and goodbye all of the animals living in the wetlands — which is my biggest concern.”

Besides creating ecologically barren areas, a loosestrife takeover and loss of wetlands would pose huge problems for birds using the region as a stopover on their migration routes. Rogers will learn more about where loosestrife is spreading, thanks to new data from the drones, gathered with the help of intern and geology student Angus Armstrong ’21 and technical support from SUNY Potsdam Assistant Professor of Geology Adam Pearson. The summer’s work has been supported by the T. Urling and Mabel Walker Research Fellowship Program. 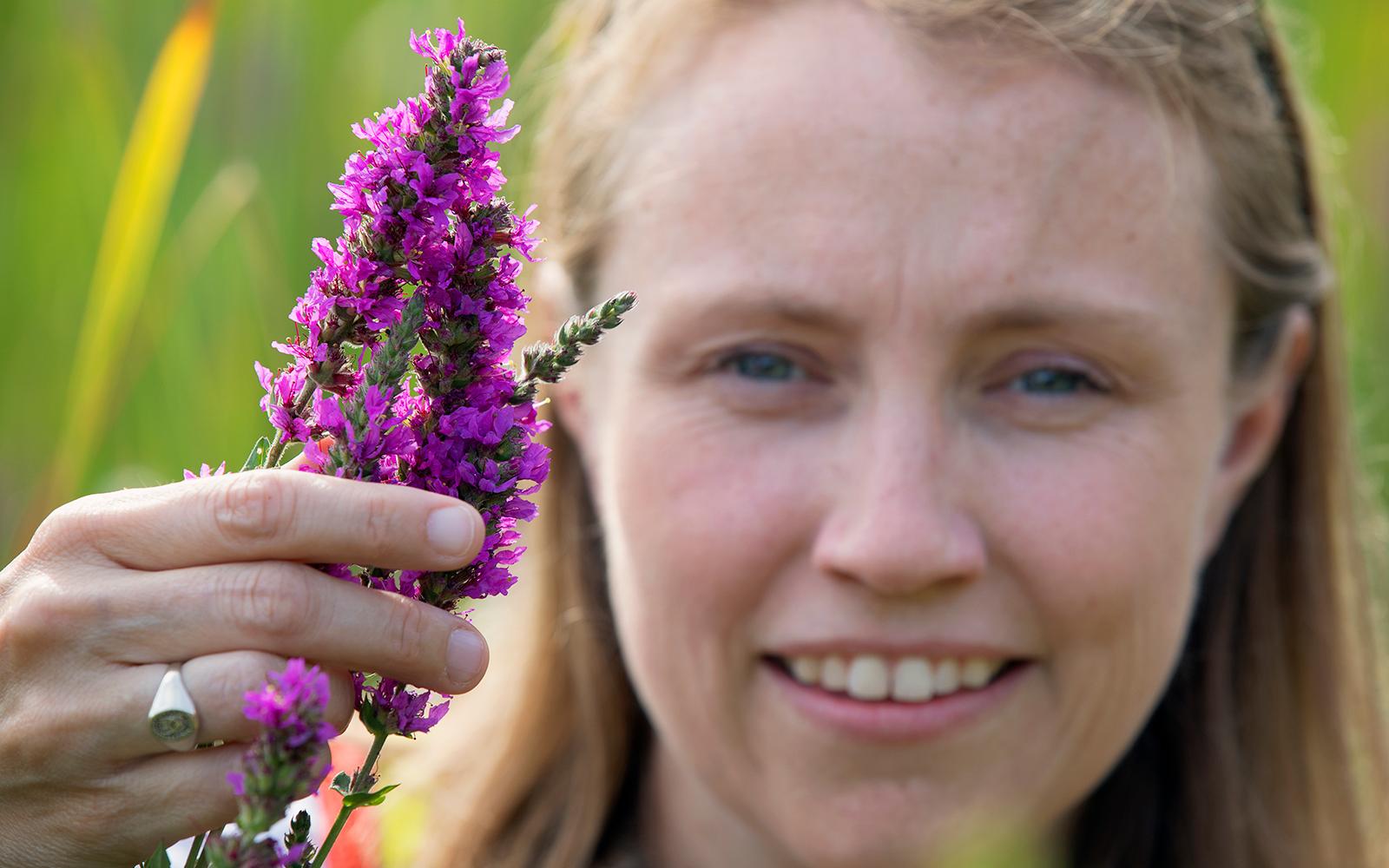 Rogers has found that increased levels of this Eurasian invasive coincides with frequent roadside mowing. In the not-to-distant future, she expects to have a study which could well inform policy surrounding state and municipal mowing. Her recommendation may be simple enough. Instead of spreading the seeds with machines, “mow before the blooms are up,” she said.

Preventing human-aided spread of the invasive would complement Rogers’ plan to use her survey data to locate the most important places for releasing more beetles, galerucella calamerensis, also a Eurasian species that keeps loosestrife in check in its native region. In three years, she has used an increasing numbers of the insects as biocontrol at a growing number of sites. The beetles have shown encouraging willingness to make salad out of purple loosestrife. 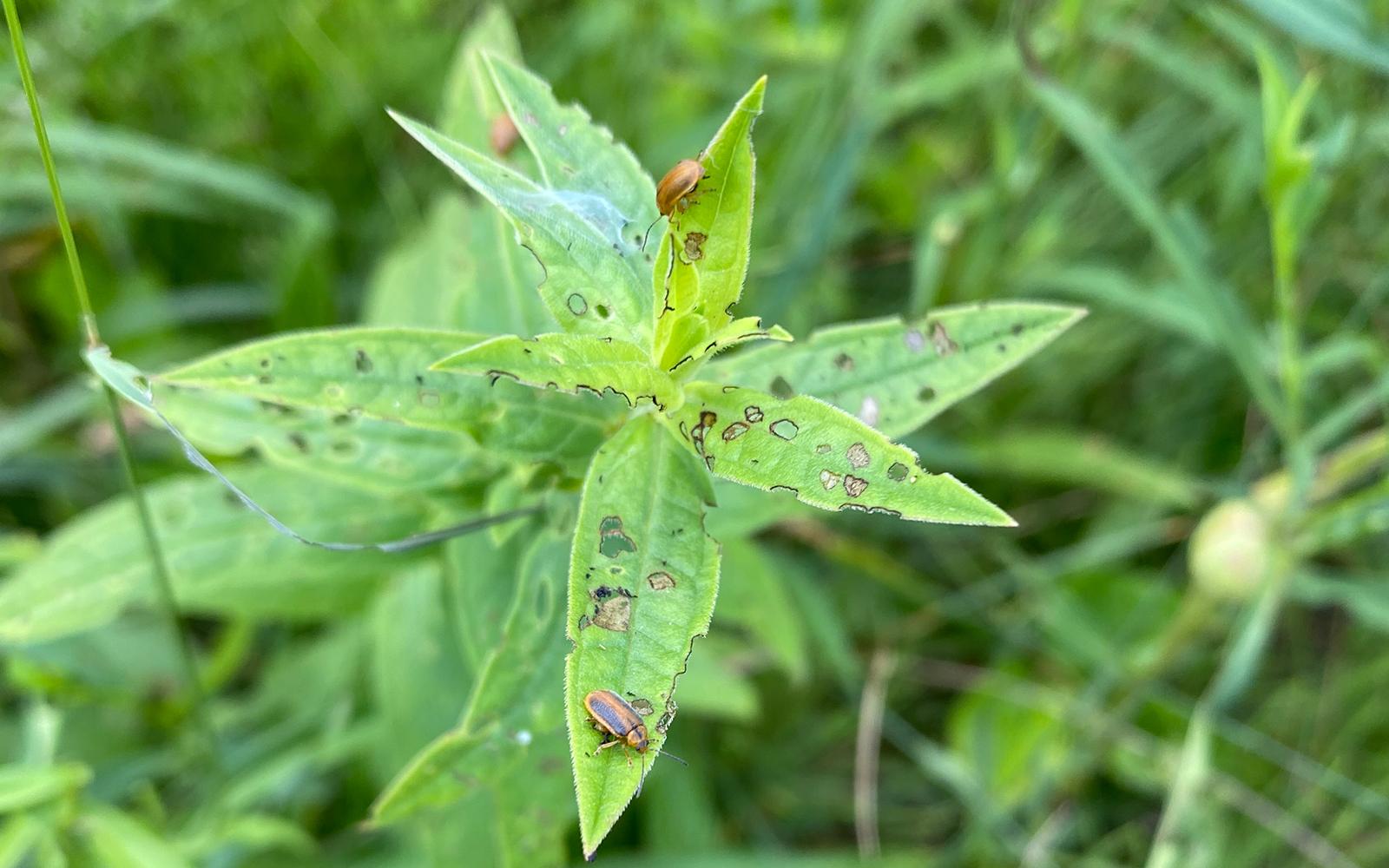 “The beetles are only about half the size of a pinky fingernail,” Rogers said. “My interns laugh at me when I call them my babies.”

Rogers released in 2018 a supply of 1,100 of the beetles, given to her by the New York State Department of Environmental Conservation. Last summer, she set up a beetle hatchery and propagated 5,000 more of the insects for further distribution in the weediest areas.

“Now we are seeing larvae on the tops of the plants, which we never saw before,” Rogers said. “In areas where we released the beetles two years ago, they’re eating up the plants like crazy.”