The obscure and often misunderstood communities of the Amish remain in focus for author and SUNY Potsdam Professor Emerita Dr. Karen Johnson-Weiner. In a new title released this week, however, Johnson-Weiner draws from a lifetime of study and nationally-recognized expertise to shine light into the history and evolving culture of Amish women in particular.

“The Lives of Amish Women,” published by Johns Hopkins University Press, was released yesterday. Johnson-Weiner, a SUNY Distinguished Service Professor of anthropology, felt compelled to highlight the emerging diversity of the Amish world, even as each church-community “responds to the challenge of living in the world while resisting assimilation to it.” The result is an intimate and illuminating exploration of the key role Amish women play in maintaining the spiritual and economic health of their communities.

“Today’s diverse Amish church-communities may be as different from each other as they are from their non-Amish neighbors,” Johnson-Weiner said. “Historically, many of those writing about the Amish have been men, and they have too often presented Amish women as silent, submissive helpmeets to their husbands in a very patriarchal culture. Having spent much of my time among the Amish with women, I found this picture to be inaccurate. I knew Amish women to be strong, involved, and respected in their Amish world.” 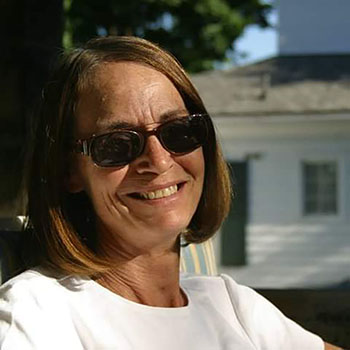 Johnson-Weiner’s first book, “Train up a Child: Old Order Amish and Mennonite Schools,” was published by Johns Hopkins University Press in 2007. Her second work, “New York Amish: Life in the Plain Communities of the Empire State,” was released in 2010 from Cornell University Press, with a second edition appearing in 2017. With Donald B. Kraybill and Steven M. Nolt, she co-authored “The Amish,” published by Johns Hopkins University Press in 2013. Johnson-Weiner has also authored a number of articles on Old Order language, culture and education. She was the fall 2015 Snowden Fellow at the Young Center for Anabaptist and Pietist Studies at Elizabethtown College, and during her career at SUNY Potsdam was twice awarded a President’s Award for Research and Creative Endeavors, in 2004 and 2011. She also received a Chancellor’s Award for Excellence in Scholarship and Creative Activities in 2005.

Johnson-Weiner received her Bachelor of Arts degree in 1975 from Hope College and a Master of Arts from Michigan State University in 1976. She earned her Ph.D. in linguistics from McGill University in Montreal in 1984, and has been studying patterns of language use and cultural maintenance in Amish and Mennonite communities for 35 years.

Johnson-Weiner’s teaching career in linguistic anthropology at SUNY Potsdam spanned many years, and included courses on language and gender, origins of language, the Amish, Mennonites and Anabaptism, and endangered languages. Much of her efforts have been spent correcting misconceptions and stereotypes about a culture that can seem quaint and impenetrable to those on the outside. “The Lives of Amish Women” puts that effort a good deal farther down the field.

“I wanted to show how the lives of Amish women reflect the continuity of a world in which daughters grow up working with mothers and grandmothers, but, at the same time, I wanted to show how — as Amish communities have become more integrated economically with the non-Amish world — Amish women have also found themselves owning businesses and working in factories,” Johnson-Weiner said. “I wanted to explore how an Amish woman who farms with her husband and lives in a home without running water or indoor plumbing is similar to or different from an Amish woman who runs a large business employing many of her neighbors, enjoys solar power, and works on a computer.”