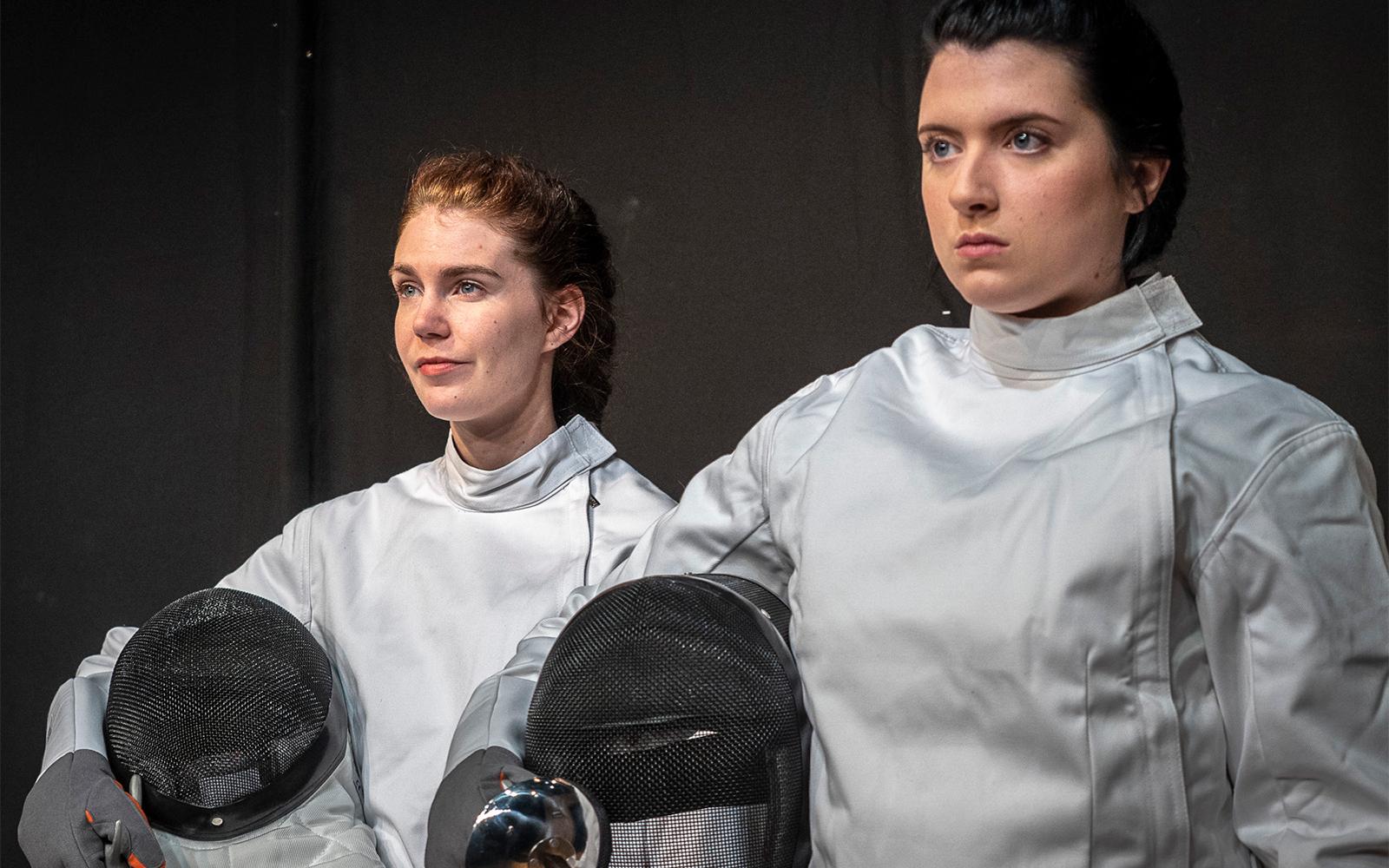 Pendragon Theatre will bring “Athena,” the critically acclaimed comedy by Gracie Gardner, to SUNY Potsdam on Sept. 27 and 28, in a production directed by a professor emerita and starring an alumna.

“Athena” will be presented on Friday and Saturday, Sept. 27 and 28, at 7:30 p.m., in the Proscenium Theater, located in the College’s Performing Arts Center. The event is sponsored by the Department of Theatre and Dance.

“Athena” is directed by Pendragon Theatre’s Artistic Director (and SUNY Potsdam Professor Emerita) Kimberley Bouchard and features recent SUNY Potsdam graduate Cammie Marshall ’19, starring alongside Rachel Kemp. “Athena” is a coming-of-age comedy about the rivalry and friendship of two teenage athletes. Mary Wallace and Athena are brave 17-year-old fencers who are training for the Junior Olympics. They practice together, they compete against each other, they spend their lives together and they wish they were friends.

First performed in 2018, “Athena” is a New York Times Critic’s Pick: “A deadly serious comedy about ambition, success and owning your superiority. In its delicate ferocity, it shows a playwright who is full throttle funny and wise beyond her years.”  The play was deemed “wily and entertaining” by the Village Voice.

Bouchard said she was first attracted to the play by its title.

“Athena is one of the goddesses I have been fascinated by since I was a child. Born from the head of a male-god! The goddess of war and wisdom and the arts! Wow! What a super-woman,” Bouchard said. “After reading the play ‘Athena,’ I was enthralled by the story of these two young women athletes as they discover their power, their strength and their vulnerabilities. As a young woman growing up before Title IX, I was an athlete with few opportunities to engage in competitive sports. During high school, I took up fencing at the local college with a girlfriend who felt the same lack in her life. Fencing was our outlet for a yearning we had to be capable, strong and legitimately competitive. We loved it.”

Bouchard added: “With the tremendous and beautiful competitive spirit of the Women's World Cup this summer, I felt that bringing to the Pendragon stage this play, that celebrates and humanizes young women athletes, was a very fitting choice for our fall play and for the touring show to schools.”

Actors Rachel Kemp and Cammie Marshall play highly competitive teen fencers and have been training to fence for the roles with champion fencer, Viveka Fox. Fox is head coach of the Vermont Fencing Alliance, a former all-Ivy fencer and North Atlantic women's foil champion. In 2019, she qualified to represent the U.S. in age 50-60 women’s foil at Veteran World Championships for the second time.

“Learning to fence has been so much fun and challenging. Working with Viveka Fox has been great,” said Kemp, who plays the title role. “We've had a unique challenge in choreographing the fights because we've had to work backwards. We know who is supposed to score a point when, so it's been a matter of silent communication to signal when that person is ready to hit, and when the other person is ready to be hit. As a dancer, I've appreciated that fencing takes quick footwork and a lot of lunging. Our thighs were sore for days!"

Admission is $15 for the general public, $10 for SUNY Potsdam students, faculty and staff, and $5 for senior citizens and youth. To purchase tickets, contact the Community Performance Series Box Office at (315) 267-2277, go to www.cpspotsdam.org, or visit the box office, located in the PAC lobby. Tickets will also be available at the door.

The Proscenium Theater is wheelchair accessible. There will be no sign language interpreter for these performances.

Pendragon Theatre is an ensemble of theatre artists, based in the Adirondacks, who are dedicated to preserving the vitality and enhancing the quality of professional theater, through year-round performance and educational programs. Pendragon receives funding from the New York State Council on the Arts, with the support of Governor Andrew Cuomo and the New York State Legislature. For more information, visit www.pendragontheatre.org.

From directing, choreographing, acting and dancing, to designing and technical work, theatre and dance are highly collaborative art forms at SUNY Potsdam. Students and professionals engage in creative problem solving, requiring the setting and meeting of long-term goals, and the analysis and understanding of movement and dramatic literature. For more information about SUNY Potsdam’s Department of Theatre and Dance, visit www.potsdam.edu/theatre.

Founded in 1816, The State University of New York at Potsdam is one of only three arts campuses in the entire SUNY system. SUNY Potsdam’s arts curriculum offers the full palette: music, theatre, dance, fine arts and creative writing. No matter the discipline, people from all backgrounds can find their creative compass at Potsdam, with myriad arts immersion experiences available for both campus and community. To learn more, visit www.potsdam.edu.