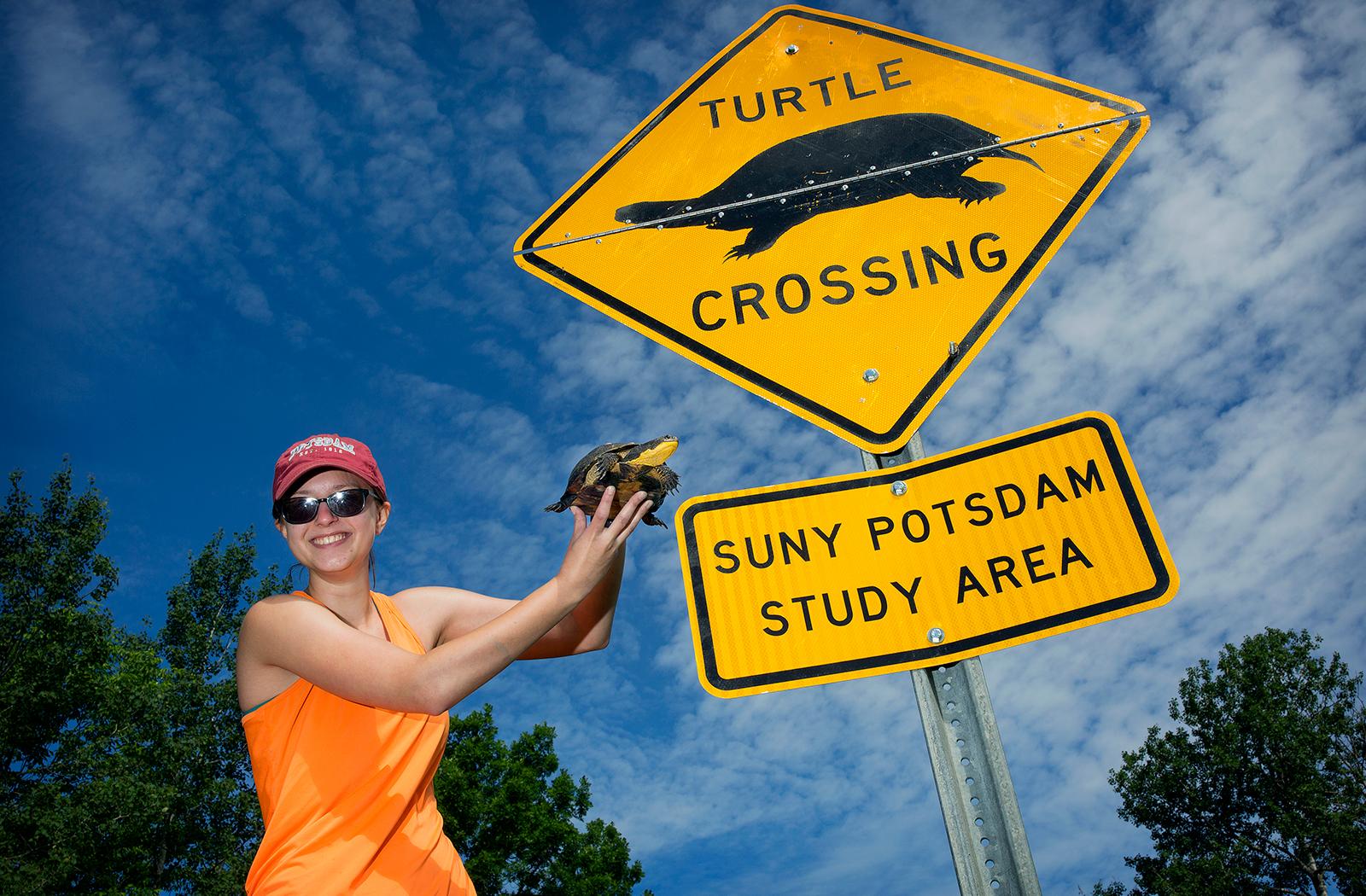 It's nesting season for turtles in the North Country, and that means many species will be making their way from wetlands to dry land in order to lay their eggs -- which often means a dangerous journey across a roadway.

Johnson is working with several students and recent alumni of the College's biology program to post special turtle crossing signs on county and town roads at critical locations where there is evidence that turtles are especially at danger of being killed.

"Blanding's turtles can live to be 80 years old and are listed as a threatened or endangered species in nearly every state where they are found, including New York State. At this time of year, turtles leave their wetlands to go to uplands to nest, and invariably they cross roads. Older females are critical to maintaining the population because they are more successful at breeding, so it is very important to try to protect them during nesting season in particular," Johnson said.

The temporary signs will be posted over the next month, to coincide with the annual nesting period for several species, including painted turtles, snapping turtles and especially the Blanding's turtle. Automobiles are the top threat to survival for the threatened Blanding's turtle species, which is considered at a high risk for extinction. The North Country is home to one of the largest populations of the at-risk species in the Northeast.

The turtle crossing signs are set to be posted on the following local roadways:

Although Johnson and his team are currently unable to post their signs on state roadways, they would also like to remind local motorists to please slow down and take caution when driving on New York State Route 68 between Canton and Lisbon, near the Upper and Lower Lakes Wildlife Management Area. 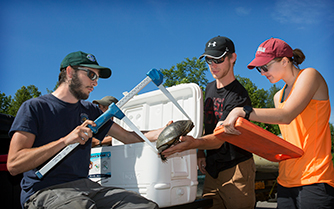 In addition to posting the signs and testing their effectiveness, Johnson and his team members are also working to monitor the local turtle populations. They are testing nest site creation methods to reduce the need for females to cross the road, and are also working on measures to protect nests from predators such as raccoons and skunks.

Johnson has been working on conservation projects to protect the Blanding's turtle since 1998, and has received approximately $300,000 worth of grant funding to support his efforts over the years, working with numerous undergraduate and graduate students. He regularly collaborates with the DEC and Dr. Tom Langen at Clarkson University as well as with wildlife officials and scientists from Massachusetts, Maine, Pennsylvania and New Hampshire regarding this research.

SUNY Potsdam's Department of Biology is grounded in the principle that every student should receive a quality education fitting their interests. Undergraduate research is embraced, with opportunities for hands-on learning in the fields of ecology, evolutionary biology, cell and molecular biology, environmental science, and anatomy and physiology. The department also operates the Wagner Institute for Sustainability and Ecological Research. For more information, visit www.potsdam.edu/academics/AAS/biology.

Founded in 1816, The State University of New York at Potsdam is one of America's first 50 colleges -- and the oldest institution within SUNY. Now in its third century, SUNY Potsdam is distinguished by a legacy of pioneering programs and educational excellence. The College currently enrolls approximately 4,000 undergraduate and graduate students. Home to the world-renowned Crane School of Music, SUNY Potsdam is known for its challenging liberal arts and sciences core, distinction in teacher training and culture of creativity. To learn more, visit www.potsdam.edu.