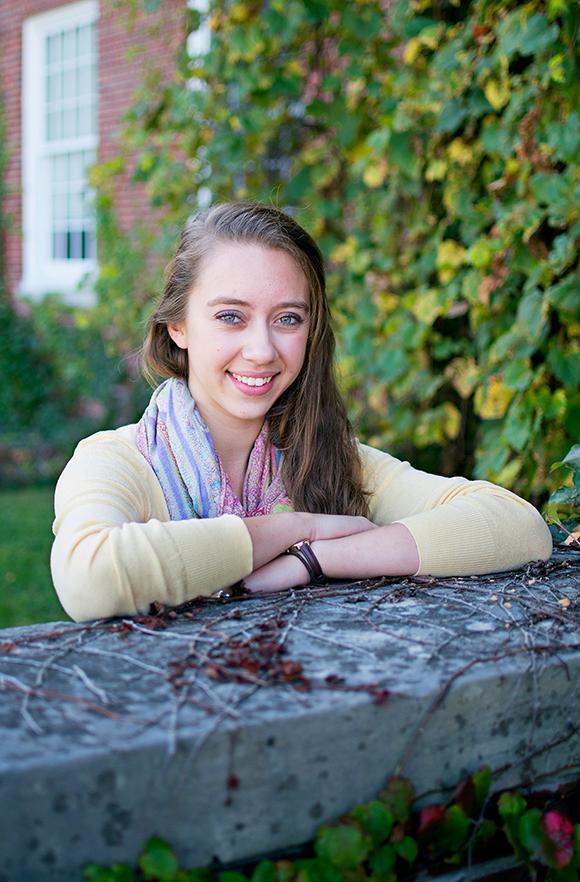 Mahala Nyberg ’18 first met World War II veteran Donald Waful by chance in a bookstore during her freshman year at SUNY Potsdam. She began chatting with the Syracuse, N.Y., resident about his experiences during the war and afterward.

Their conversations soon turned into an intensive research project for Nyberg, who is double-majoring in history and archaeological studies at SUNY Potsdam. She began working with Waful to document his experiences as a prisoner of war during World War II, through the College’s Presidential Scholars Program, and eventually expanded her project to capture the 102-year-old’s full life story.

Now, the final result is on display for the public to appreciate. The Onondaga Historical Association recently unveiled a new exhibit designed and installed by Nyberg, titled “Donald R. Waful: The Remarkable Life of a Local Syracusan.”

“My main goal for this project was to share Waful's complete story with his Syracuse community. I feel that his story is one that deserves to be shared, and in many ways, this exhibit was my way of giving back to him after the years he has spent working with me for my studies. Waful’s experiences offer wonderful insight into Syracuse history and a fascinating personal narrative from World War II,” Nyberg said.

Waful enlisted in the U.S. Army in 1941. He first met his future wife, Olga “Cassie” Casciolini, while stationed in Northern Ireland prior to deploying to North Africa, where he was later captured. He spent two and a half years in POW camps, first in Italy and then in Poland, until the war’s conclusion. Waful reunited with Casciolini following the Victory in Europe, and the couple married and returned to Syracuse. Waful first worked in insurance before later becoming the president of the Syracuse Chiefs Minor League Baseball team, a position he held for 35 years.

Nyberg drew upon her major coursework, as well as her minors in museum studies and anthropology, as she prepared the exhibit. She worked alongside museum staff and received guidance from her faculty advisor, Dr. M. J. Heisey, a professor of history, who also attended the opening.

“Onondaga Historical Association’s newest exhibit on Donald Waful is a glimpse into his long and experience-filled life, one that was dramatically captured by SUNY Potsdam student Mahala Nyberg. It was my pleasure to work with Mahala for the past several months to see this exhibit come to fruition. She has developed a special intergenerational relationship with her 102-year-old subject, and has presented him in a very respectful and sensitive display,” Museum Collection Curator Tom Hunter said. “Mahala put forth tremendous effort to plan, design and install this exhibit, and OHA is honored to be the host venue. I believe it is a win-win-win-win situation for Mahala, Don Waful, Onondaga Historical Association and the Central New York community.”

The exhibit depicts Waful’s upbringing and college years at Syracuse University, follows his service in the war, and then his view of life in the city as he settled there. To put together the exhibit, Nyberg conducted a number of oral interviews with Waful and collected photographic and documentary materials. All of the recordings and materials will go to the Onondaga Historical Association archives following the exhibition.

“It has meant a great deal to me to be able to work with Don Waful for so long and I am incredibly grateful for how willingly he has shared his story with me. It was incredibly rewarding to tell his story through this exhibit and to know that I was able to create something meaningful for Don and the community that cherishes him,” Nyberg said.

This is just the latest among the student’s many achievements at SUNY Potsdam. In addition to her history research, Nyberg has also completed a field school at a prehistoric indigenous archaeological site in the Adirondacks in the summer of 2016, working under Dr. Timothy Messner. She also completed a semester studying abroad through the College’s exchange program with York St. John University in Great Britain, and has interned at the Adirondack Museum in Blue Mountain Lake, N.Y.

The exhibit on Donald R. Waful will remain open for viewing during regular museum hours, until Sunday, Nov. 25. The Onondaga Historical Museum is open from 10 a.m. to 4 p.m. on Wednesdays, Thursdays and Fridays, and from 11 a.m. to 4 p.m. on weekends. The museum is located at 321 Montgomery St. in downtown Syracuse, and admittance is free. To learn more, visit www.cnyhistory.org.