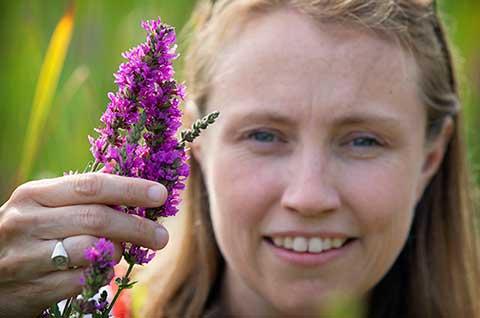 The professor and her students traveled to examine and record the presence of several types of invasive plant species in an area stretching from South Colton to Alexandria Bay, N.Y. Rogers’ research is funded in part by a grant from the St. Lawrence River Research and Education Fund.

“Nobody collects data for St. Lawrence County, especially for invasive species. They normally stop at the Blue Line at the edge of the Adirondack Park, so there’s no information for our area. Our goal this year was just to map it, to know where these species are, so we can do something in the future,” Rogers said.

The research team is seeking to document the spread of purple loosestrife throughout wetlands in the region in particular. Additionally, they are also looking for two other invasive species, the common reed and wild parsnip.

To be considered invasive, a species must be non-native to an area and have no predators, Rogers said.

“Only a particular set of species of beetles eats the purple loosestrife, so it’s going to spread everywhere. And the problem with this spreading is that ultimately that all of these cattails will be gone and you’ll have a field of purple loosestrife. So, you’ll get none of the migratory birds that use the wetlands, and you’ll end up with just purple loosestrife—which, while beautiful, is ecologically barren,” said Rogers.

“Ultimately, all the wetlands will get dried up by purple loosestrife. As a migratory bird issue, this is huge, because we’re such a stopover point from the northern range and the southern range of all the migratory species,” she added.

Among the findings from the first year of the project was that there was a correlation between a higher number of invasive plant species in areas where the state and municipalities have mowed along roadsides.

Following the successful first year of the project, Rogers plans to move toward efforts to remove the purple loosestrife in the locations where it has been found, by introducing a beetle species that will attack the invasive plant.

A North Country native, Rogers returned to Potsdam after receiving her bachelor’s degree at Princeton University and her master’s and Ph.D. at Columbia University. In addition to her research into invasive plant species, her research interests also include monitoring deforestation in Central African protected areas, using geographic information systems (GIS).

SUNY Potsdam’s Department of Biology is grounded in the principle that every student should receive a quality education fitting their interests. Undergraduate research is embraced, with opportunities for hands-on learning in the fields of ecology, evolutionary biology, cell and molecular biology, environmental science, and anatomy and physiology. The department also operates the Wagner Institute for Sustainability and Ecological Research. For more information, visit https://www.potsdam.edu/academics/AAS/biology.

SUNY Potsdam’s environmental studies program is designed to prepare environmental leaders of the future, with an interdisciplinary curriculum that uses the nearby Adirondack Park as a case study and field site, grounding theory in practice through exploration of research topics and projects. The environmental studies program seeks to provide students with an understanding of human attitudes and behaviors toward nature, and provides a grounding in science to prepare them to shape viable environmental policy and practice. To learn more, visit http://www.potsdam.edu/academics/interdisciplinary/envstudies.

Founded in 1816, The State University of New York at Potsdam is one of America’s first 50 colleges—and the oldest institution within SUNY. Now in its third century, SUNY Potsdam is distinguished by a legacy of pioneering programs and educational excellence. The College currently enrolls approximately 4,000 undergraduate and graduate students. Home to the world-renowned Crane School of Music, SUNY Potsdam is known for its challenging liberal arts and sciences core, distinction in teacher training and culture of creativity. To learn more, visit www.potsdam.edu.