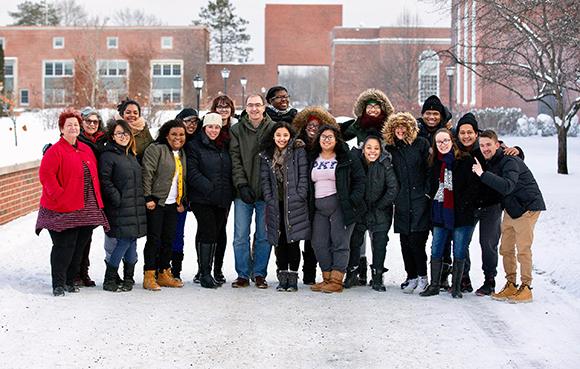 SUNY Potsdam Professor of Modern Languages Dr. Liliana Trevizan gave Spanish students in her upper-level “Cultures of Latin America” class a choice earlier this semester: Either they could complete a class presentation, or they could work on a project to show the concept of “solidaridad” (solidarity) in the real world, by finding a worthy cause and doing something to help.

It was an easy choice for the 18 students, said Maritza Angeles-Gonzalez ’19, a double-major in psychology and Spanish. They decided to raise money to help with rebuilding efforts in the wake of two natural disasters that had hit Latin America within the space of two days earlier this fall—first the earthquake in Mexico, and then Hurricane Maria in Puerto Rico.

“This was an important project for the entire class, and I think it was especially close to heart for those in class, like myself, who had family members living in the places of impact in both Puerto Rico and Mexico (for me, it was family in Mexico). So when Dr. Trevizan asked us if we'd be okay with substituting the class presentation for a solidarity project, no one hesitated to say yes,” Angeles-Gonzalez said.

The students undertook a bottle collection campaign, set up a table to ask for donations in the Barrington Student Union, and sold popcorn and hot chocolate during their fall Spanish movie series. They also passed a bucket for donations during Café Latino, the annual Spanish Club event when students share their favorite Spanish poetry, music and cultural traditions over a shared meal.

Their biggest fundraiser by far was also the most complicated to organize—a “Got Hambre?” dinner, in which students took orders for homemade Latin dishes, like tacos, enchiladas, arroz con pollo, pepinos picantes, crepes, arroz can leche and empanadas. They cooked the meals at one student’s off-campus apartment and then delivered orders to their customers on campus.

“Once the big day came, we had more than 25 generous peers and faculty willing to contribute to our cause. When I look back on this day, I think it was all about unity and helping each other out with what we could, and what we had to provide. This wasn't a competition to see who did more or less, it was a way to express our empathy and our strength in numbers,” Angeles-Gonzalez said.

The “Cultures of Latin America” students ended up raising a grand total of $465 over the course of the semester. Their donations will be split between Mexico and Puerto Rico rebuilding efforts. To do this, the students entrusted their funds to two faculty members from those places.

Dr. Sergio López, an assistant professor of Spanish in the Department of Modern Languages, will be bringing his portion of the funds to Mexico. Educational Opportunity Program Counselor Linnette Braceros-Torres, who is also an adjunct instructor in the department, will donate funds to the rebuilding efforts in Puerto Rico.

“The students worked really hard, and truly showed they understood the concept of solidarity, which was one of my academic learning outcomes for this course, so I’m very happy with the results,” Trevizan said.

Angeles-Gonzalez, who served as the co-coordinator for the volunteer project along with Charina Medina ’19, said that she and her classmates were proud of what they were able to achieve together.

“Regardless of where we may find ourselves when our relatives, family or friends need help, whether we are near or far, we’re ready to help one another,” she said. “This project meant a lot to me, because the money that was raised will be going directly to victims of these natural disasters, and knowing that in some way we were able to contribute to the reconstruction following these unfortunate events is a reward in itself for me.”

There are clear advantages to preparation in more than one language for students, particularly now that effective communication is such a valuable commodity in the workplace. The SUNY Potsdam Department of Modern Languages offers bachelor’s degrees in French and Spanish, as well as minors in French, Spanish and Arabic Studies. Majors in the modern languages combines well with other disciplines, providing graduates career opportunities in fields like public relations, social services, education, anthropology and the law. Many graduates continue their studies at the graduate level, while others find careers in government and in business—both of which are actively seeking to meet the need for language and culture skills in the decades ahead.