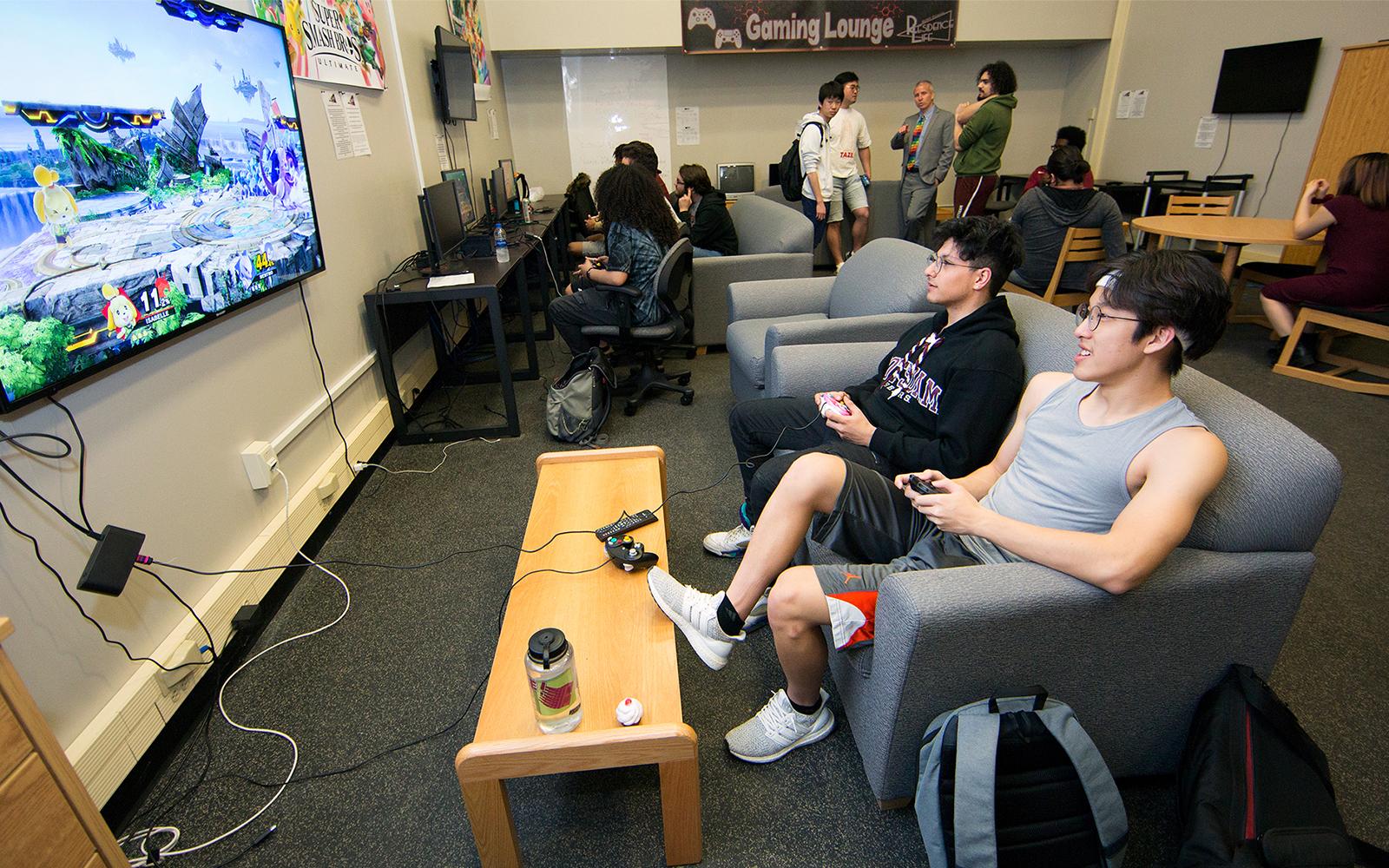 Peter Park ’22 (right) and Atash Nassiri ’23 practice with the SUNY Potsdam Esports Team in the Lehman Hall Gaming Lounge. Park is competing on the League of Legends “A” team.

SUNY Potsdam students with a passion and talent for Esports banded together over the past year to establish their own campus club team. Now competing in the Eastern Collegiate Athletic Conference (ECAC), SUNY Potsdam’s Esports Club is fielding eight teams competing in four events against 57 colleges and universities nationwide.

The 38 students in the SUNY Potsdam Esports Club come from all majors and bring a variety of extracurricular and academic interests with them, including several varsity athletes. The club’s self-chosen motto is “Commit. Persist. Learn.,” according to the group’s director and head coach, Dr. Anthony Betrus ’93 & ’94, a professor of educational technology and management.

“Our major goals are a commitment to academics and to our team, student retention and competing to have the highest grade point average out of all the Potsdam Bears club and varsity athletic teams,” Betrus said. “Gaming and Esports fosters creative problem-solving. It makes you think laterally across subject areas. You have to open your mind up. It builds real skills.”

Students practice and compete in the Residence Life Video Gaming Lounge, located in Lehman Hall. All matches are livestreamed on the team’s Twitch channel, at https://www.twitch.tv/sunypotsdamesports.

Betrus is gaining national attention for his research on and advocacy for Esports. His talk, “Esports is Real Sports,” at the first-ever TEDxSUNYPotsdam event, has more than 3,000 views, and Betrus was recently interviewed at length for the Esports Business Podcast. He also penned a “Game Connoisseur” column for Fourth Coast Entertainment.

“This really came from the students. This was their idea and we are here to make them as successful as possible,” Betrus said. “It’s an opportunity for empowerment. Our competitors learn grit and resiliency, which is so important for them as they meet with adversity. There are opportunities for everyone.”

League of Legends “A”

League of Legends “B”

SUNY Potsdam plans to add teams in FIFA and Rocket League in the Spring 2020 season.

In addition to competing and cheering each other on, the members of the SUNY Potsdam Esports Club also recently completed team-building activities at the Leadership and Challenge Center in Maxcy Hall, working on the indoor high and low ropes courses and the climbing wall. They even volunteered at the annual downtown clean-up day, assisting with raking leaves in the village, on Nov. 3.

Canning is a former sponsored top 500 professional Overwatch player. For his part, Betrus calls Fuschetto “SUNY Potsdam’s top athlete,” because the recent music education graduate is a professional-level competitor in Super Smash Bros Melee, among the top 50 players in the world. Canning is helping the students with their training and strategizing, with the mindset of “perfect practice makes perfect.”