Two outstanding SUNY Potsdam seniors were recently among those honored with the 2022 Chancellor’s Award for Student Excellence. Interim Chancellor Deborah Stanley presented the awards in a ceremony in Albany on April 26. The SUNY Potsdam recipients included Aliaksandra Reutovich ’22 and Gideon Smith ’22. 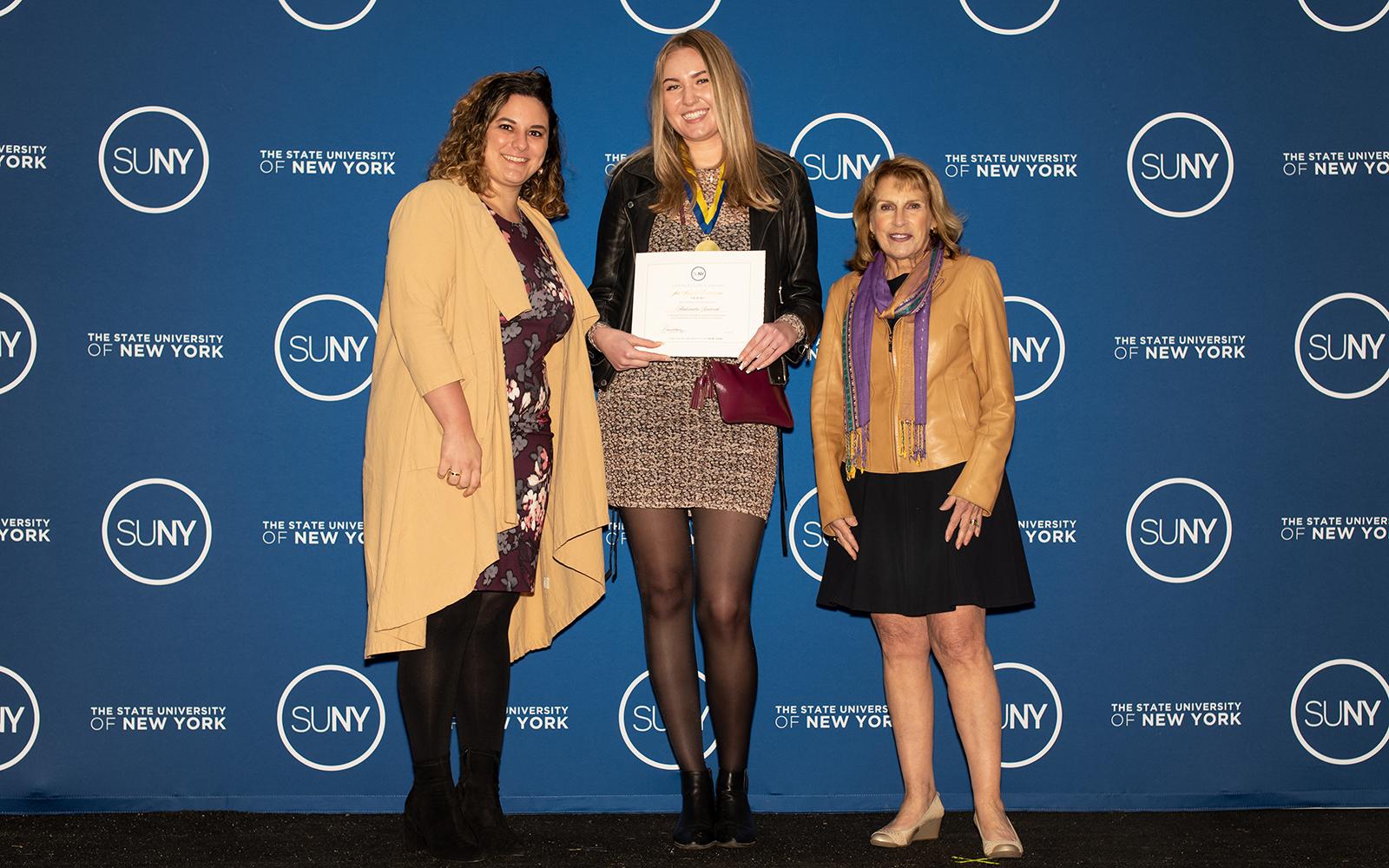 SUNY Potsdam senior Aliaksandra Reutovich ’22 (center) of Brooklyn, N.Y., has been named a recipient of the 2022 Chancellor’s Award for Student Excellence.

Aliaksandra Reutovich ’22 is a dual biology and biochemistry major from Brooklyn, N.Y., who has participated in undergraduate chemistry research since her first semester. Her resourcefulness in handling challenging situations, dedication, enthusiasm, creativity and ability to quickly learn and adapt are characteristics of a great scholar. Upon her graduation in May, she will have co-authored five peer-reviewed publications, including one featured on the cover of the internationally renowned journal Metallomics, and she has presented her findings at five regional and national symposia. A gifted student, Reutovich has been recognized with several awards, including being the prestigious Barry Goldwater Scholarship. 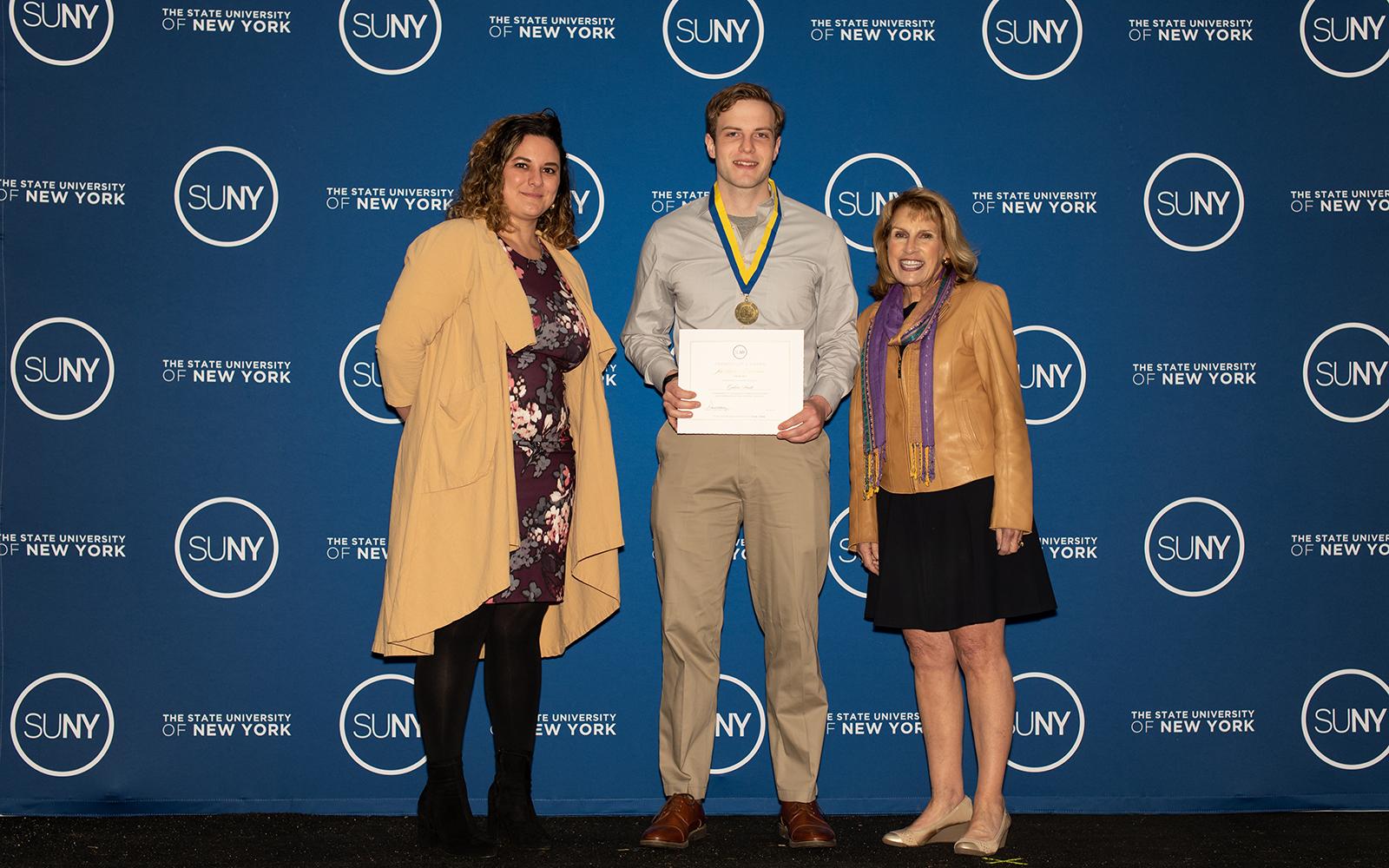 SUNY Potsdam senior Gideon Smith ’22 (center) of Potsdam, N.Y., has been named a recipient of the 2022 Chancellor’s Award for Student Excellence.

Gideon Smith ’22 of Potsdam, N.Y., has distinguished himself among his peers through his passion, professionalism and fine attention to detail. As a chemistry major with dual minors in biology and wilderness education, Smith competes on SUNY Potsdam’s cross-country and track and field teams. He is a prolific undergraduate chemistry researcher who has co-authored four peer-reviewed publications, with two more papers set to publish this spring. He has presented his research at four regional and national conferences. Smith is a certified wilderness leader who is actively involved in the Venture Outdoors program. He is experienced in backpacking, wilderness navigation, and ice and rock climbing.

The Chancellor's Award for Student Excellence was created in 1997 to honor students who excel academically and show involvement in leadership roles, athletics, community service, creative and performing arts, campus involvement, or career achievement. Each year, campus presidents establish a selection committee, which reviews exemplary students. Nominees are then forwarded to the Chancellor's Office and are subject to a second round of review. Finalists are then recommended to the Chancellor to become recipients of the award.

Each recipient receives a framed certificate and medallion, which is traditionally worn at Commencement. SUNY Potsdam will honor the two Chancellor’s Award recipients and the other graduates of the Class of 2022 in ceremonies on Saturday, May 21. For more information, visit www.potsdam.edu/commencement.