Seeing the future through the past

Perched on a boulder still black from the fires of her ancestors, Marla Jacobs ’20 found what she had been looking for. Through an archaeology field school arranged by the Mohawk Council of Akwesasne Department of Economic Development, Jacobs had been trained to find traces of the past, as a field technician investigating archaeological concerns often linked to development projects in Ontario. The artifacts pulsed with life. They told stories that Jacobs, an Akwesasne Mohawk, had to follow, and they helped set the course to her future. 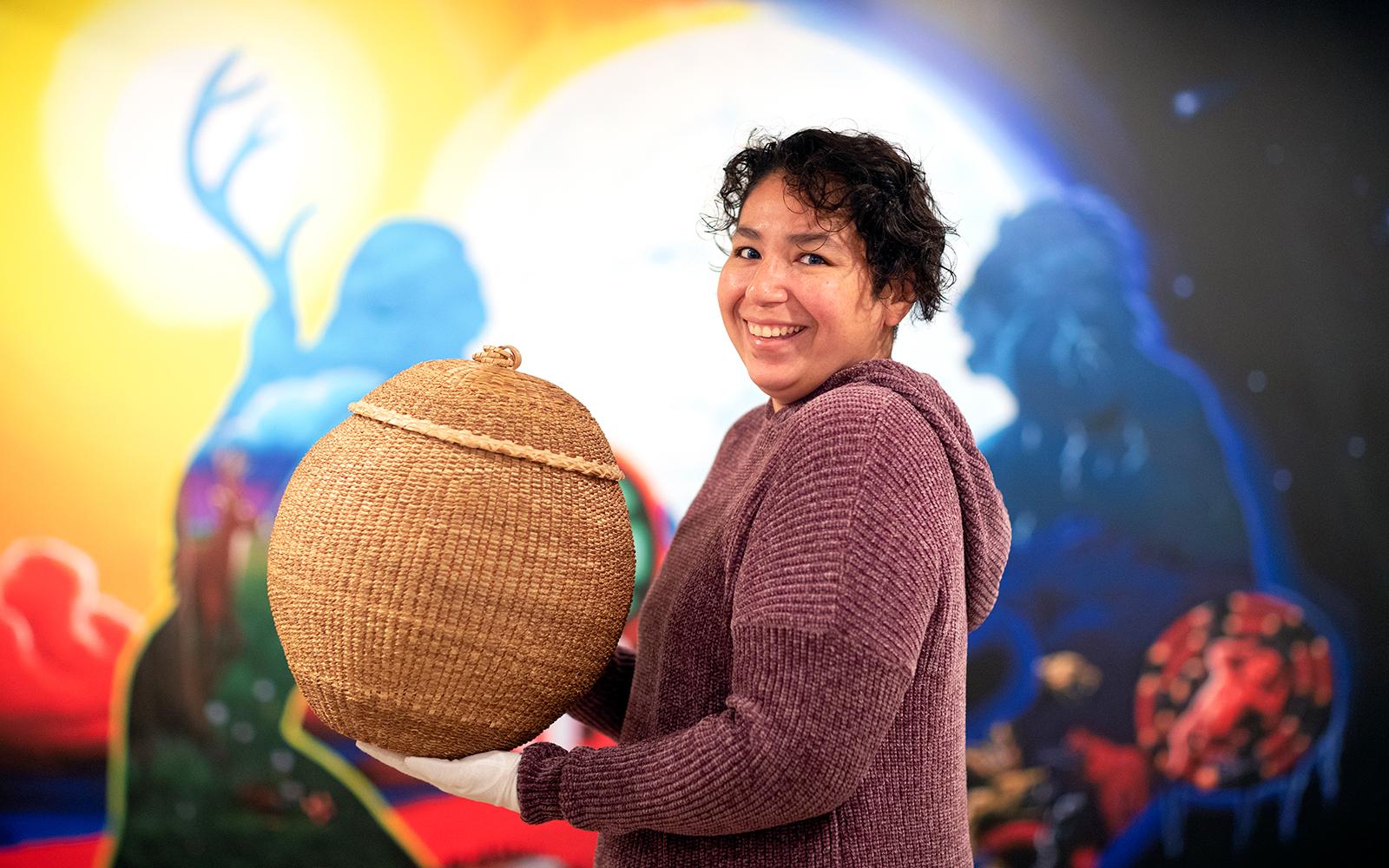 “I have to have this in my life,” Jacobs said, six years later. “To hold a ceramic shard my ancestors made, I can think, my great-great-grandmother might have made this pottery. And if times had been different, she might have handed it down to me.”

In late October, Jacobs moved comfortably through the rooms of the Akwesasne Cultural Center Museum in Hogansburg, N.Y., where she has helped create exhibits and tell the Mohawk story. Jacobs has immersed herself in several internships involving this cultural facility on the banks of the St. Lawrence River, including the 2018 Ways of Knowing project, a partnership of the Six Nations Indian Museum, The Wild Center, the Native North American Travelling College and the Akwesasne Cultural Center, bringing multigenerational Indigenous culture to the Adirondacks through dance, arts, storytelling and craftsmanship.

The pathway Jacobs followed to get here was not a straight or easy one. She was a teen mother who did not finish high school — instead, she obtained her GED at age 21 and enrolled at SUNY Potsdam, but left within a year, driven back by challenges common to many working parents who strive to complete a college education.

“I was really struggling at home with a baby, balancing home life and family,” she recalled.

Nevertheless, Jacobs kept returning to what would be a seven-year fight to gain a bachelor’s degree in archaeology. Even when the hurdles mounted, she was drawn back by the joy of learning, connection and ultimately by a sense of responsibility to the next generation.

“I wanted to be the best role model I could for my kids,” she said, “to show them no matter what obstacles are in their life, they can continue on to their dreams.” 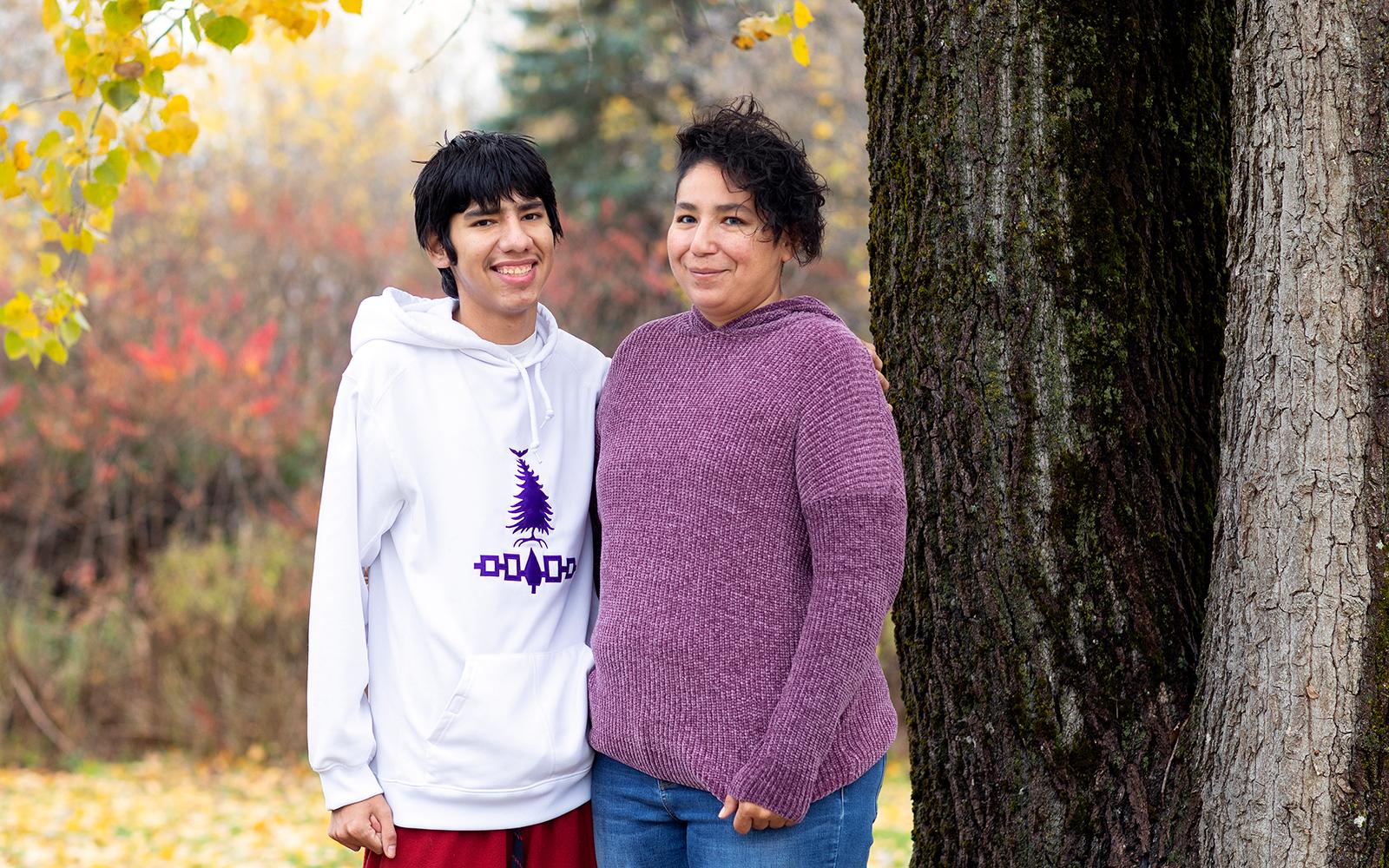 Jacobs, right, with her son Hunter.

Hunter Cooke’s journey has been woven with his mother’s; he also finds strength in the fires of the past. Born with cystic fibrosis, Cooke, now 18, suffered from birth with lung infections. Many days, it was hard to find the relief of a single, unconstrained breath. By the time he was six, doctors had discovered his lungs were so badly damaged he couldn’t continue without a transplant.

“They called on his seventh birthday and said he was officially on the transplant list,” Jacobs recalled. “Luckily, we only waited a month. They called and said they had lungs, so we started a new life.”

While Cooke was in the hospital, his mother passed the long parade of days with him, first helping to ready him for the surgery ahead, and afterward, praying that his body would accept the new lungs. To pass the time, she watched archaeology programs on the History Channel and National Geographic and dreamed of what it could mean to follow a similar path. When Cooke was 10 years old and stable enough that Jacobs was finally able to leave his side, she knew it was time to go back and work toward her degree.

SUNY Potsdam met her halfway. Aware of her drive and intent, professors worked with her around her son’s health issues and her need to be present for him. It was a 2015 experimental anthropology class led by Associate Professor of Archaeology Dr. Timothy Messner that put history in Jacob’s hands in a real way. Students used stone tools to build a 16-foot pine dugout canoe, applied pitch to help seal the vessel, and took it for a spin. As the craft cut the waters of the Raquette River, the past leaped to life. 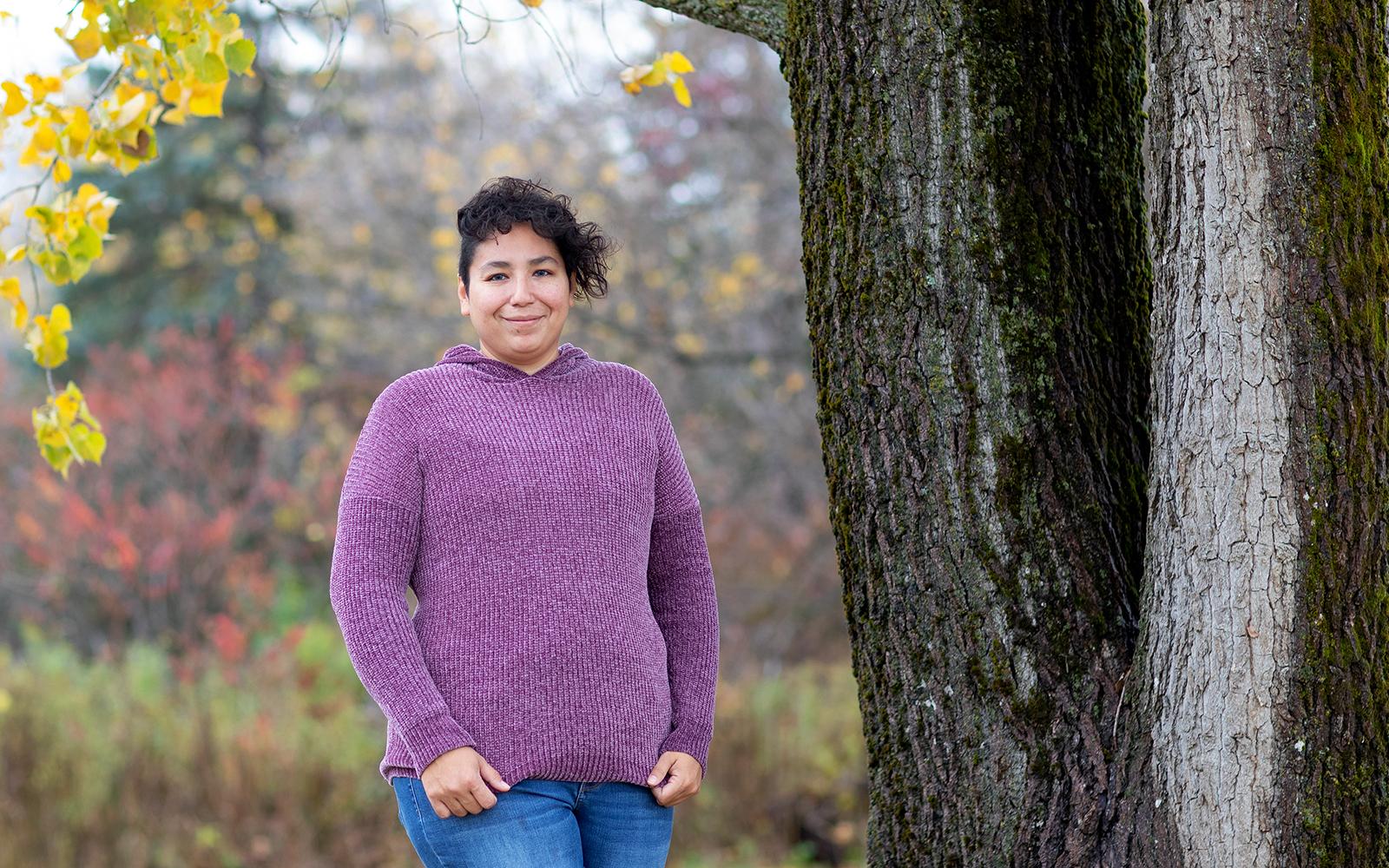 Jacobs poses for a portrait outside the Akwesasne Cultural Center Museum.

This year, Jacobs did something she had never thought she could do — she graduated with a 3.24 GPA, an archaeology degree and three minors — in Native American studies, biomedical anthropology and museum studies. She is now deeply immersed in creating a display for The Wild Center in Tupper Lake, drawing from an archaeology site on one of the lake’s islands, and using pioneering work by Messner to unveil the prehistory of the Adirondacks. The display will help fill a large room and will feature stone tools, pottery shards, a clay pipe and projectile points. It will bring a lens to ancient human ways in a region that Messner says was historically regarded as “a big starving ground,” but one which, through his work, is revealing itself to have been a much more dynamic home to Indigenous life than originally thought.

“My display will represent what is underneath the dirt and how important archaeology is to the Adirondacks and the Indigenous peoples who once occupied the land,” Jacobs said. “It will be physical proof of that history, including a 12,000-year-old artifact which will be on display there.” 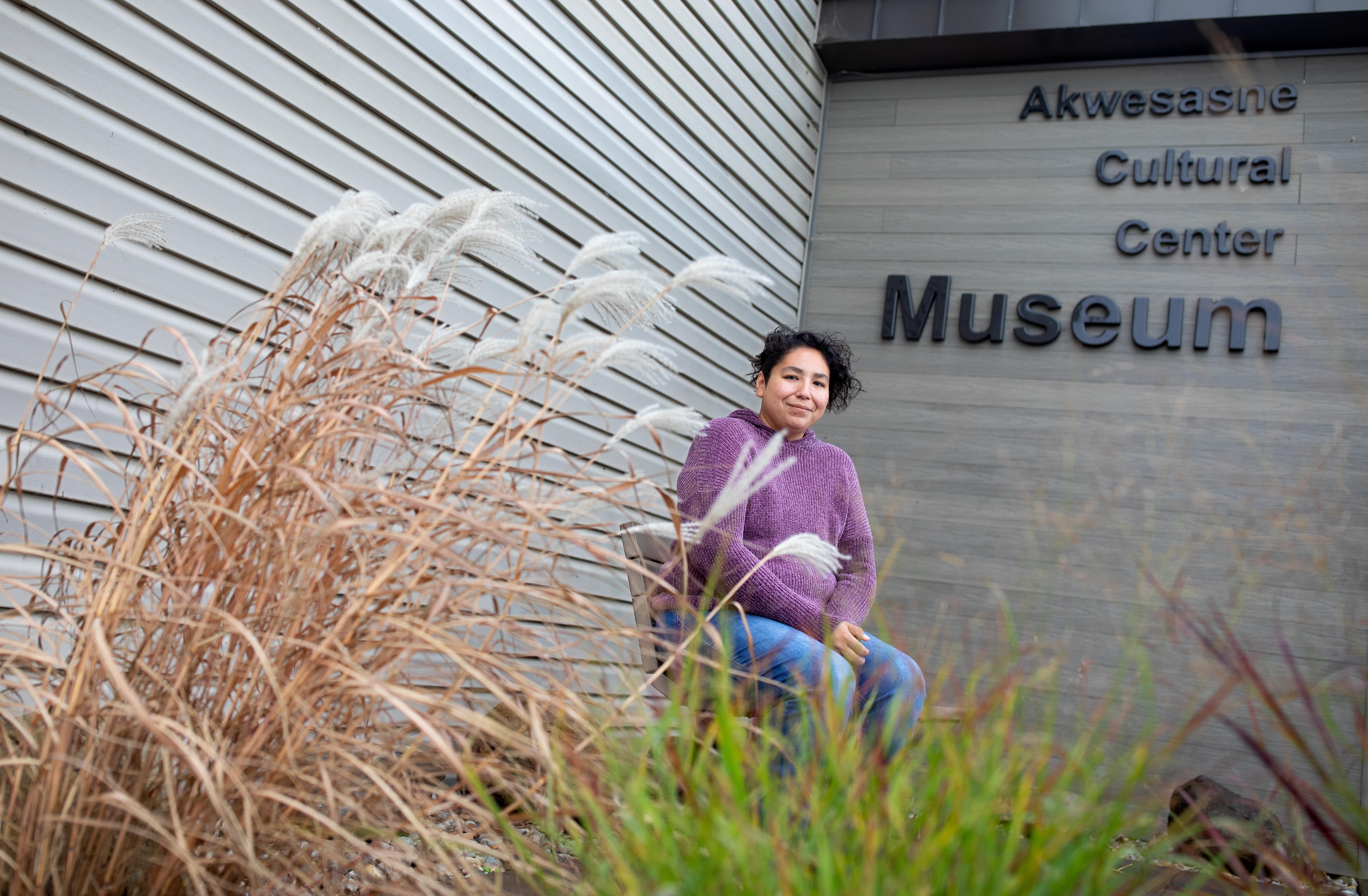 Jacobs poses for a portrait outside the Akwesasne Cultural Center Museum.

This history is food for Marla Jacobs’ soul. In her youth, she was introduced to the traditions of the church. Later, she learned she could go to longhouse with her father and find a new level of nourishment.

“I said, ‘This is what I want,’” Jacobs remembered. “I want my culture, my language, for my kids to know who they are, and the struggles we have gone through to be who we are.”

Cooke, along with Jacobs’ other three children, draw strength from their culture. Before the pandemic, Cooke took part in Oheron:kon, a Mohawk rite of passage program. Part of his coming to awareness was accomplished in a youth group for older teens. It provided cultural teachings and lessons in how to start fires, catch fish, sing traditional songs, speak the language, harvest crops, play lacrosse, and undertake other activities important to the Mohawk people. He is taking classes at Iohahi:io Akwesasne Education and Training Institute, a learning community steeped in Haudenosaunee traditions.

They give tools for a battle Cooke may never be able to fully lay aside. Cystic fibrosis is a relentless disease, its grip never completely broken. Cooke is now on a waiting list for a kidney transplant. But he isn’t looking back; instead, he gazes ahead to normal life, with plans on finishing high school and going to college to study video game programming. He recently went on his first college tour, with more planned for the future. Cooke refuses to be defined by a medical condition.

At the conclusion of her seven-year journey to graduation, Jacobs reflected on a battle that was so hard fought she just wants to hold on a while to what she has gained before she tries to see what’s ahead. It may be that she has already achieved her single greatest wish for herself — to be a role model her children can respect and use as a mirror to see their own potential.

“I feel like I befriended a lot of people I wouldn’t have in everyday life; I got to learn those things I missed in high school,” she said. “To walk away with the GPA that I earned really made me proud of myself. I didn’t think I was capable of doing that.”