Cashlynn still remembers the feeling of anxiousness as she contemplated the blank canvas in front of her, gripping the paintbrush with uneasiness as she painted her very first oil painting in fifth grade.

“I walked out with this painting of a scene of the mountains, and I was so proud,” said Cashlynn (Jaggers) Colbert ’19 & ’21. “I remember from that moment forward, I always wanted to make other people feel that way, to have that pride and confidence in art, which is difficult to do sometimes, especially because you’re expressing yourself and it’s daunting scary at times.”

Cashlynn had no way of knowing at the time, but she would one day be back in a similar classroom, inspiring and mentoring a new generation of students in her new role as a middle school art teacher at Salmon River Central School.

In high school, she knew that she wanted to pursue a career in art education, and she set her sights on SUNY Potsdam—which for the Massena native, was just a short drive from home. “My parents are both teachers, and they are from this area. I just love it here, and I love SUNY Potsdam,” Cashlynn said. “I toured the campus multiple times in high school, mostly for fun. It’s beautiful and I knew SUNY Potsdam was where I wanted to go the whole time. It was nice because I was able to commute, and I had friends from around here too.”

I love SUNY Potsdam. I love that I was able to go to school here for both my undergrad and my master’s degrees and that I have been able to teach in the area. Hopefully, someday I can inspire my students to come to this school and go to the art department too.” -Cashlynn (Jaggers) Colbert ’19 & ’21

Her hyper-focused dedication and organizational skills paved the way for her to complete her degree in just three years. “I took out a pack of note cards and I wrote every single class that I needed to take at SUNY Potsdam. I had tables that represented certain semesters, and I lined them all out, and I told Caroline Downing (chair of the art department) about my plan,” Cashlynn said.

The overly ambitious approach seemed unlikely, but with Cashlynn already completing 19 college-level credits in high school, and plans to take summer, winter, and night classes, she breezed through college with the same hurried pace as her paintbrush. “I really wanted to teach as soon as I could, which worked out nicely for me, because I got a job right off the bat,” said Cashlynn. “I’m very blessed to be at Salmon River; It’s a great school and I have a great classroom there. I try and scaffold really heavily from sixth to eighth grade, so that the students are learning different art mediums, they’re learning the techniques, they’re making the artwork, and then they keep continuing to build on that every year.” 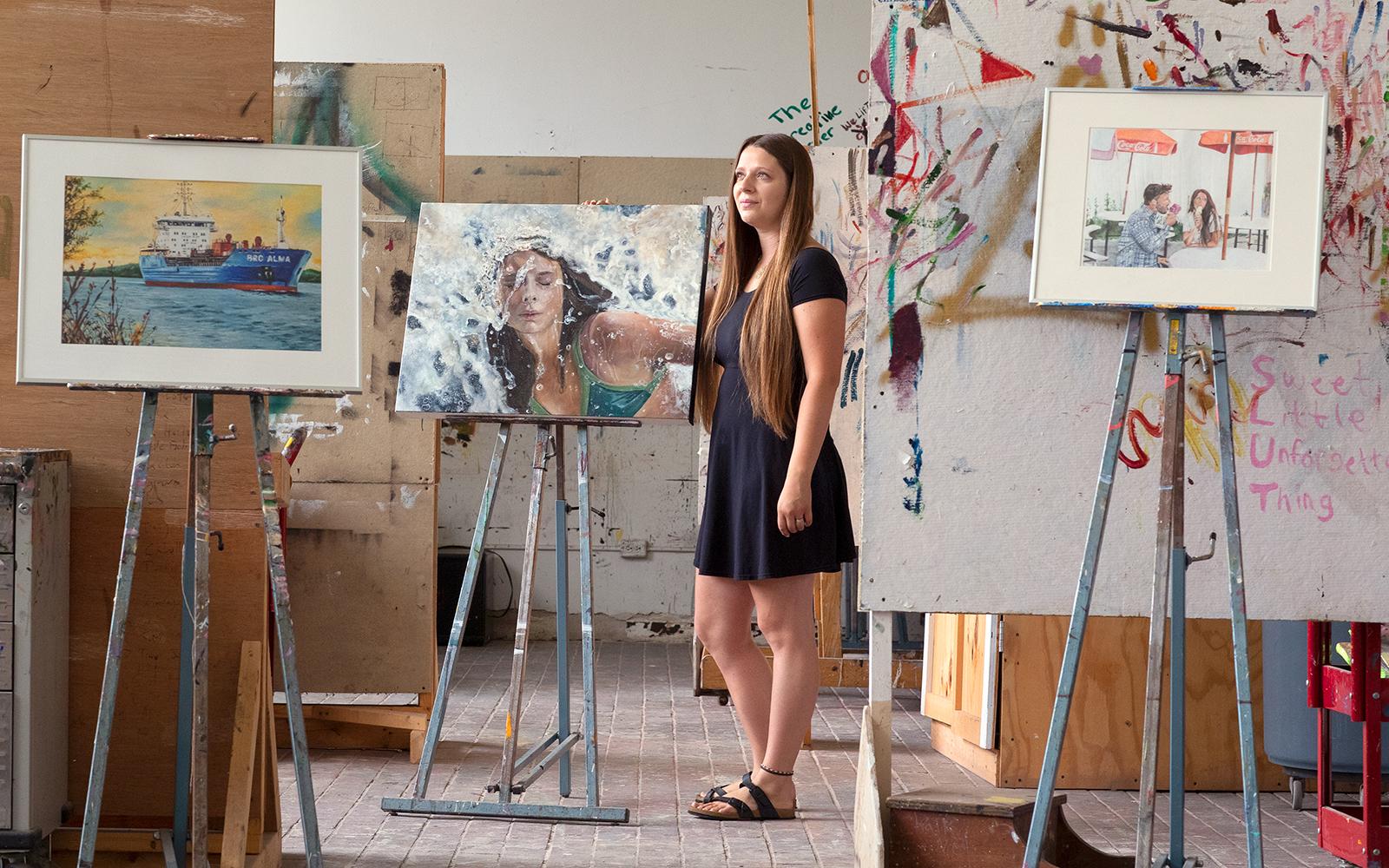 Starting just before the pandemic, Cashlynn transitioned to her first job at an uncertain time. She was still settling into her classroom routine when she was forced to move online. In the fall of 2020, she decided to return to her alma matter, enrolling in an educational technology specialist master’s degree program at the College. Now she’s balancing a full-time teaching load with graduate school—classes that are making an impact for her as a new art teacher.

“I wanted to go to SUNY Potsdam again, and I was trying to find a degree that would really complement my teaching,” Cashlynn remembered. “The technology that I’m learning in this program has really given me a boost. It’s helped through remote teaching, how to use zoom, and how to teach students to the same degree at home as in person. We learned lots of things, especially in Professor Tony Betrus’ class where we learned about the Oculus Quest (virtual reality headset).”

She has since introduced her students to the Oculus Quest, a tool they are using in the art planning process. The first step for creating a clay sculpture, for example, is to sketch it on paper. Now they can draw the sculpture using the Gravity app, and start to make sense of how the finished product will look. “It’s extremely hard for them to wrap their head around the fact that they’re drawing something that’s three dimensional, so that’s a really easy way for them to understand, ‘Oh, this is what this looks like,’ I’m trying to draw an object on two-dimensional paper that I will be able to look at from different angles or different sides. Bringing in that information from my graduate program into the school has been really interesting,” Cashlynn said.

Juggling numerous responsibilities is nothing new to Cashlynn. Back in 2017, when she was still a freshman at the College, she was commissioned to create a watercolor painting to honor then SUNY Chancellor Nancy Zipher. New to watercolor painting at the time, she leaned on the expertise SUNY Distinguished Service Professor of Art Dr. Joseph Hildreth for his guidance and feedback as she worked on the piece. In June, she traveled down to Albany for Zipher’s retirement party. “It was very fancy. My painting was on stage under a sheet before they unveiled it for her. It was very surreal,” she said. 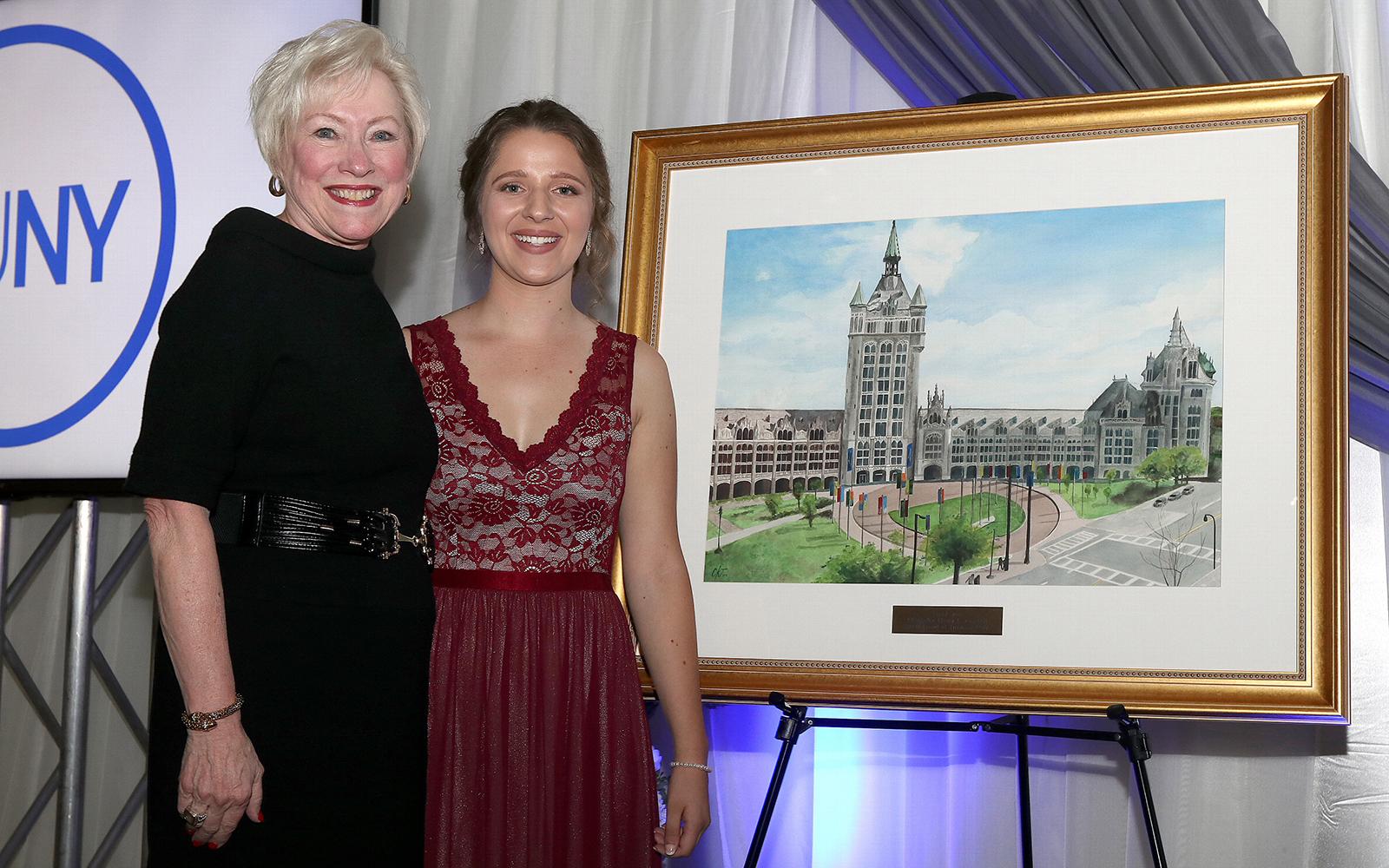 She continued to evolve as an artist over the coming years under the leadership of her advisor, Dr. Caroline Downing, and professors like Amy Swartele, Marc Leuthold, and Michael Yeomans. “Caroline Downing was my advisor, and she’s always supported all of my work and anything that I’ve done,” Cashlynn said. “I loved every one of my art classes, like the painting class that I took with Amy Swartele. Michael Yeomans was my favorite professor. He always had his office open. Any student could always go in there and just relax, and he would talk about the artwork that he was working on.”

During her second year at SUNY Potsdam—despite her plan to graduate in just three years—Colbert signed up for the Momentum program at the New Testament Church in Massena. She attended the church every day from 7 a.m. to 3 p.m., while still enrolled at SUNY Potsdam full time, taking all her classes as either independent studies or at night. With faith being an important part of her life, the program allowed her to further examine Christianity, while also preparing for service-learning trips. “We read through the entire bible in a year, and we would have bible theory and discuss the major stories. All of those experiences were meant to prepare us for our mission trips.”

They visited Washington, D.C. to pray for political leaders and then in the spring of 2018, the pinnacle of the experience was a two-week trip to Gulu, Uganda in Africa. After a war gripped the country several years earlier, many of the children were left without their parents, so Colbert and her peers traveled to an orphanage to help the children reconnect with distant family members. “I remember one time we had to bring two brothers back to their family,” she said. “The road was long, it was back in the woods with big potholes, going around a lot of brush before we got to a hut. We had a meal with them, and the two boys were able to meet their distant cousins. It was an interesting experience to be able to see that interaction, these kids meeting their uncle and explaining, ‘You’re going to live with him now.’”

While in Africa, she was also focused on her passion for art and connected with some of the children in the orphanage to teach them how to draw. From a zebra to a woman collecting water from a well, each picture they drew represented a different letter from the Acholi Alphabet, a regional language in Uganda. “I made a whole children’s book in Africa, and that was part of my SUNY Potsdam experience. So, I really tailored the trip to my learning in the program, but also SUNY Potsdam,” Cashlynn said.

When she returned to Northern New York she continued her hurried pace towards graduating in three years. Her final year focused on taking her skills as an artist and combining them with teaching. Somehow, she found time to play volleyball on the Potsdam Bears women’s volleyball team during her senior year. In the spring of 2019, she completed her student teaching at Norwood-Norfolk Central School, the final experience to fully prepare her for a career as an art teacher.

“My parents raised me in a Christian home, always just having really good morals, and staying true to what I believe,” Cashlynn said. “In school you can’t be religious, but I feel like that still plays an important part in just making sure my students have integrity and that they’re being the best that they can be. I’ve always wanted to teach, so I’m really excited for this year. I think this will be the first full year of normal teaching.”

For more information about the Department of Art, visit: https://www.potsdam.edu/academics/AAS/depts/art

Article and portraits by Jason Hunter