After excelling in SUNY Potsdam’s geology and wilderness education programs, Brandon Keough ’18 quickly transitioned to graduate school where he has been conducting research in remote parts of Alaska and combining his passion for both disciplines. His hard work has paid off, as he recently accepted a job as a geoscientist at ExxonMobil.

During the summer of 2018, after completing his degree in geology at SUNY Potsdam, Keough immediately embarked on a research project, assisting two graduate students at Purdue University. He spent six weeks working with them in the eastern Alaska Range, while also probing the region to figure out the direction for his own graduate research. “Alaska has a lot of unknowns, so it’s a pretty exciting place for me to work. It’s also extremely remote,” Keough said. 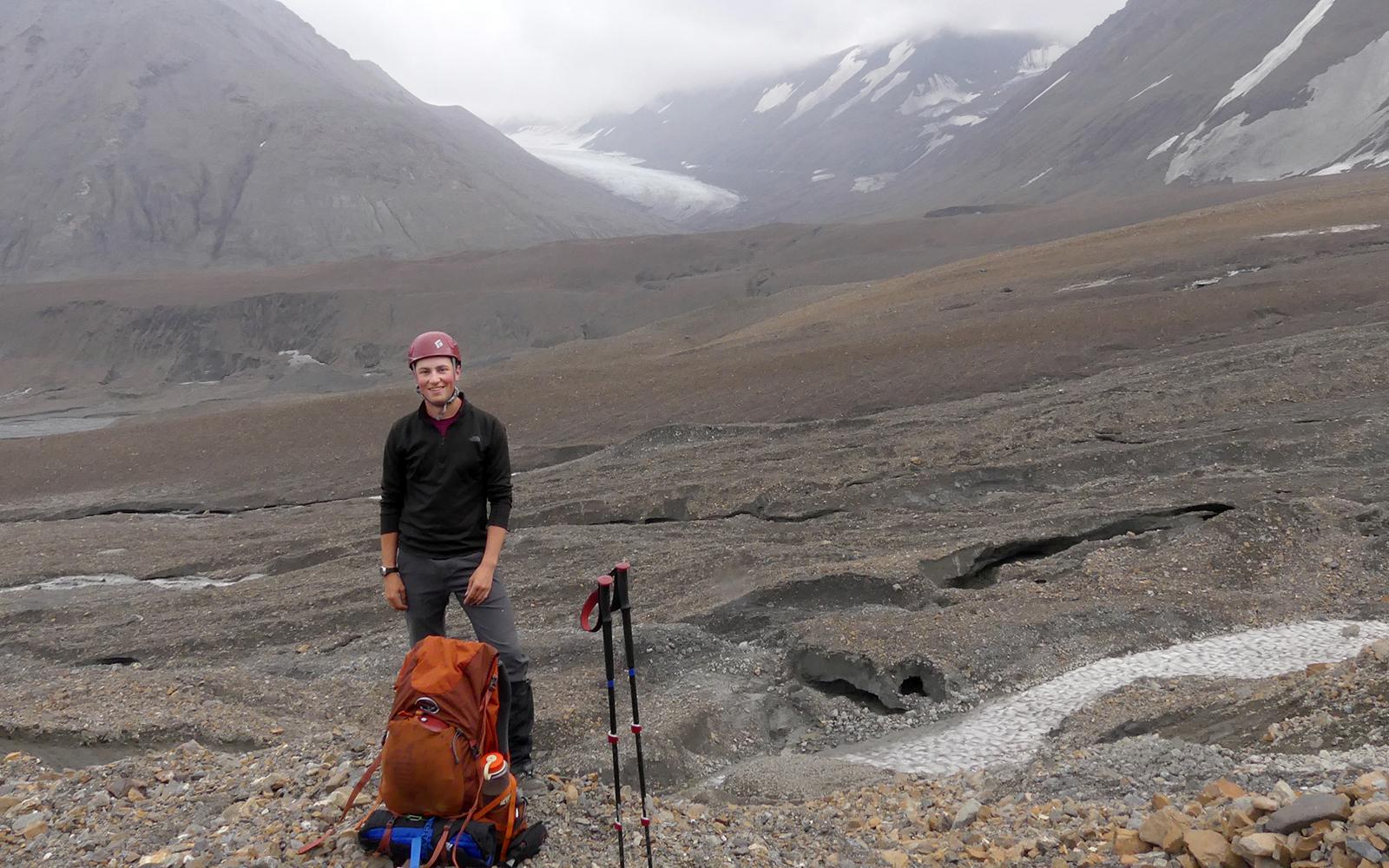 “Brandon is a paradigmatic example of the value a liberal arts education can provide. I believe his success as a geology student is a direct result of his organization, excellent time management and his confident decision-making," Dr. Page Quinton, assistant professor of geology.

For the past two years he has been pursuing his own research and working towards his master’s degree in geology at Purdue University. He spent four months in Alaska’s Denali National Park and Preserve examining geologic formations in a region that has not been studied much in the past. “One of the aspects that I have enjoyed most has been collecting data from remote locations in Denali. Despite being located in an iconic national park, some of these rock units have not been studied in detail; some have only been mapped at a relatively rough scale many decades ago. One of the reasons is that geologists have to access these locations on foot since you can't freely fly into a national park,” Keough said.

In the summer of 2019, Keough hired SUNY Potsdam alumnus Gabe Carbone ’19 to help him with his research project. The two ventured out on foot, relying on the skills they learned in SUNY Potsdam’s wilderness education and geology programs. “Gabe was the perfect field assistant and together we completed new mapping and sampling of several units,” he said. 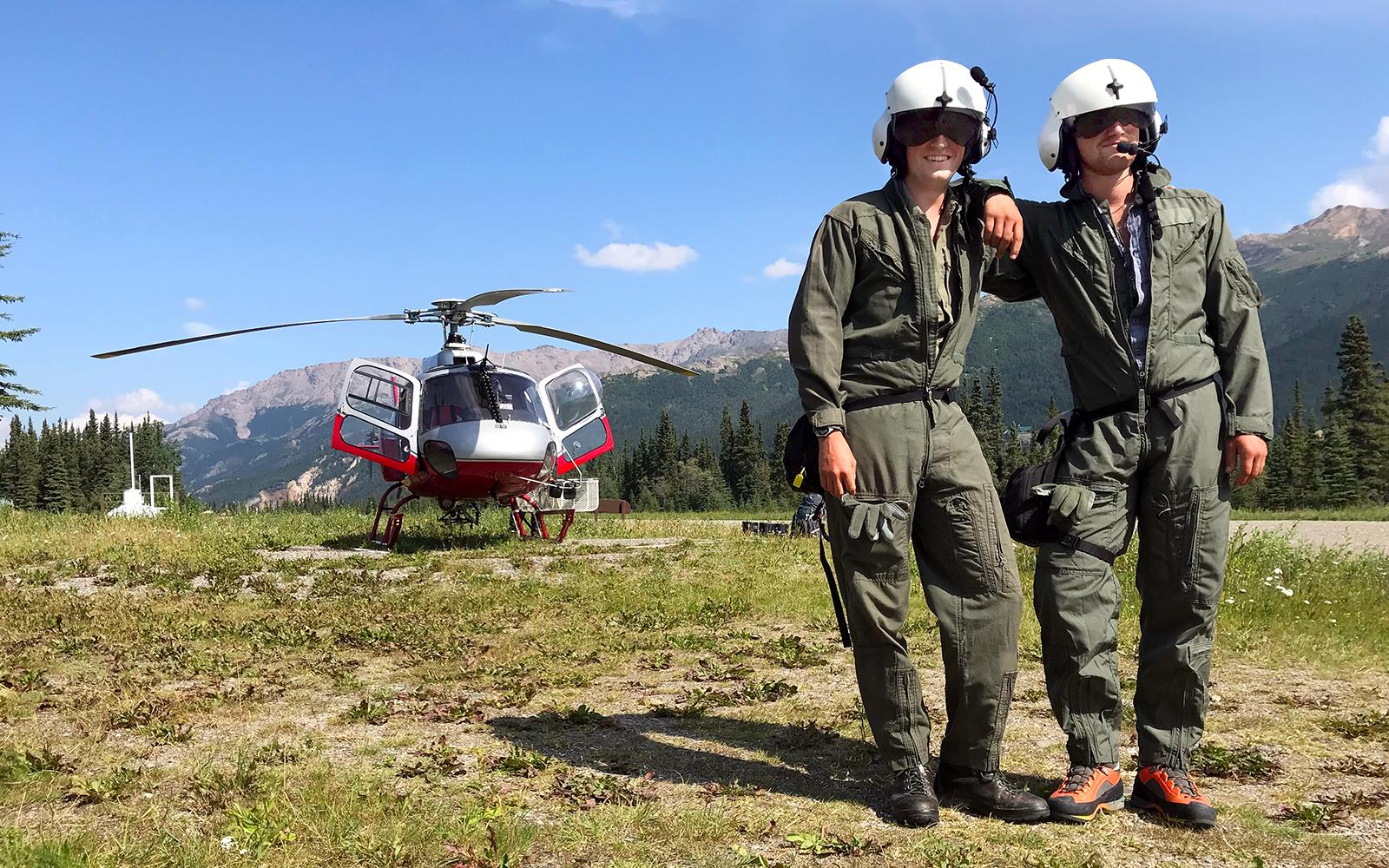 During their summer field season, Keough, left, and Carbone spent a few days working with USGS colleagues where they took a helicopter into an area they had targeted to sample together. (Submitted photo) 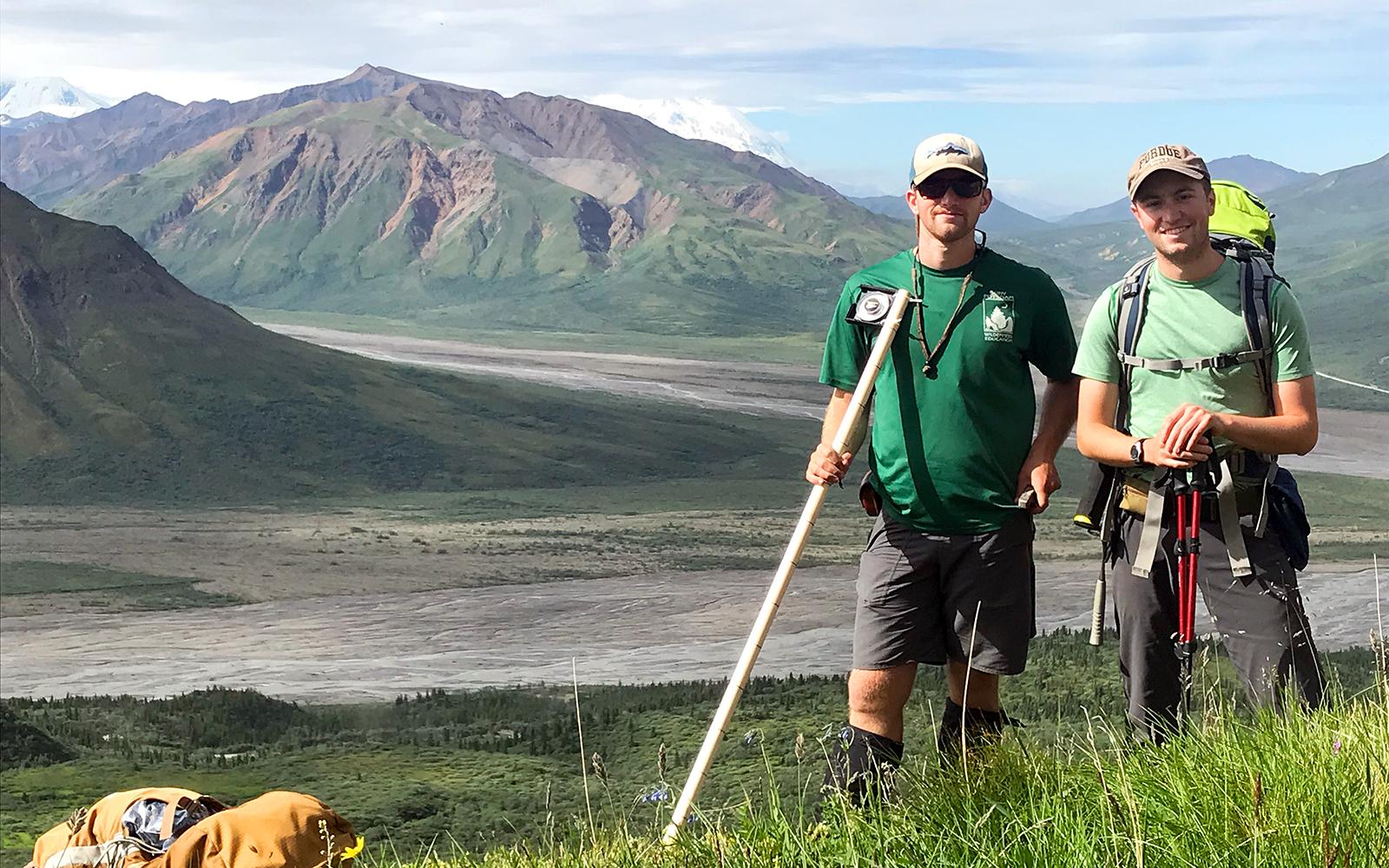 Carbone, left, and Keough stand in Denali National Park during their fieldwork. A glacier cover Denali, the highest peak in North America, can be seen in the distance. (Submitted photo)

Keough said that he compiled the data and performed analyses on the samples at a lab at the University of Arizona. “Some of the findings really shocked us. In one case our data showed that one geologic unit, previously thought to be part of an existing unit, was actually about 100 million years older than previously thought. This warranted division of a new unit in the park that has turned out to be a key part of my analysis. These results added a major component to my project that I didn't expect and have pushed me to grow as a geologist in ways that I didn't anticipate,” he said.

Separately, Keough analyzed the Cantwell Formation (about 70-80 million years old), making detailed observations of the sedimentary strata located there. One of the most compelling aspects of that geologic unit was that hundreds of bird and dinosaur trackways have recently been discovered by paleontologists. “This particular site has become important for understanding how dinosaurs evolved at relatively high latitudes. Our work provides context for these findings by establishing a framework for how the landscape changed through time, ultimately in response to major plate tectonic events,” he said.

Through his research, Keough formed partnerships with the United States Geological Survey and the National Park Service, looking at geohazards in the park and the potential for landslides. He combined his geologic mapping with existing maps, to create an updated and more comprehensive map of the park, which showcased geologic faults and folds that can dictate where landslides will occur. Keough continues to collaborate both agencies to integrate his new map with datasets acquired through recent and ongoing work to help assess possible solutions to these problems in the park.

In the summer of 2019, halfway through his graduate work, he spent a week in the Bighorn Basin of Wyoming at a field course run by ExxonMobil. After the course, he was offered a job working as a geoscientist for ExxonMobil—something he will start in the spring of 2021. “What I am most excited about is working on a variety of challenging problems that will require me to add new tools to my skillset. I am also excited to work in an environment where problem-solving requires daily collaborative efforts between scientists and engineers with diverse areas of expertise,” he said.

On top of his geology and wilderness education pursuits, Keough is also a talented violist, and as a student at SUNY Potsdam he found the time to pursue a certificate in viola performance from The Crane School of Music. “I know it seems like a really odd combination, but to me it’s not because it’s the combination that I’ve always had. It’s always interesting going from one to another—one day I would be ice climbing, and then I go all the way to the opposite end of the spectrum, and I was touring with the Crane Symphony Orchestra,” Keough said.

Not only is it rare for non-music majors to pass the audition to join the Crane Symphony Orchestra, Keough also landed the principal viola role in the ensemble. His senior year he was seated on stage, front and center next to Conductor Ching-Chun Lai, the director of orchestras and associate professor of music at The Crane School of Music. “Except for Brandon, there has not been a non-music major playing the principal role in CSO in recent years,” Lai said. “What’s remarkable is that Brandon was very involved in performance opportunities. He played and served beyond the curriculum requirements at Crane, and he seemed to enjoy it a lot.”

Keough was introduced to music at a young age, influenced by his mother’s work as a music therapist. He started playing the piano when he was just five years old, later transitioning to the viola. In high school, he was on the fence between pursuing music or another discipline. However, after traveling to California, North Carolina and Georgia for three summers in a row as part of a trail work team with the Student Conservation Association—he realized that he wanted to focus his career around the outdoors.

Keough set his sights on the geology program at SUNY Potsdam and he was immediately met with support and guidance from Dr. Michael Rygel, the chair of the Department of Geology. Rygel contacted Keough even before he stepped on campus his freshman year and helped him develop a plan for the next four years. “He suggested that I take a couple upper-division electives my freshman year. It was doing things a little out of order, but what that did was open up two summers for me to do geology field work,” he said.

Because of this, Keough was able to attend the Indiana University field camp in Montana—an intensive geology field school—right after his sophomore year, and earlier than most students. The summer after his junior year, he was hired to be an associate instructor at the field camp. “I will fully admit that my colleagues knew more geology than I did, one was a Ph.D. student, but what got me that job was actually probably some geology, but then the fact that I was prepared to help people in the outdoors and take care of myself and others in the outdoors,” Keough said.

It was because of his wilderness education minor that he arrived in Montana with a specialized set of skills, and his outdoor training fit perfectly with his scientific work. “If you want to do field work, it just goes hand-in-hand and it’s extremely valuable. I think any geologist who works in the field sees the value of first aid training,” he said.

Through SUNY Potsdam’s wilderness education program, Keough not only gained leadership experience and learned vital wilderness first aid training, but also honed technical skills, such as ice climbing, rock climbing, outdoor safety and backcountry navigation. “We do a pretty heavy program of navigation in wilderness education, starting with a 16-day course in the Adirondacks. We’re in a place that’s pretty thick and vegetated, and learning to navigate there means that you’re pretty well suited to navigate anywhere,” he said. 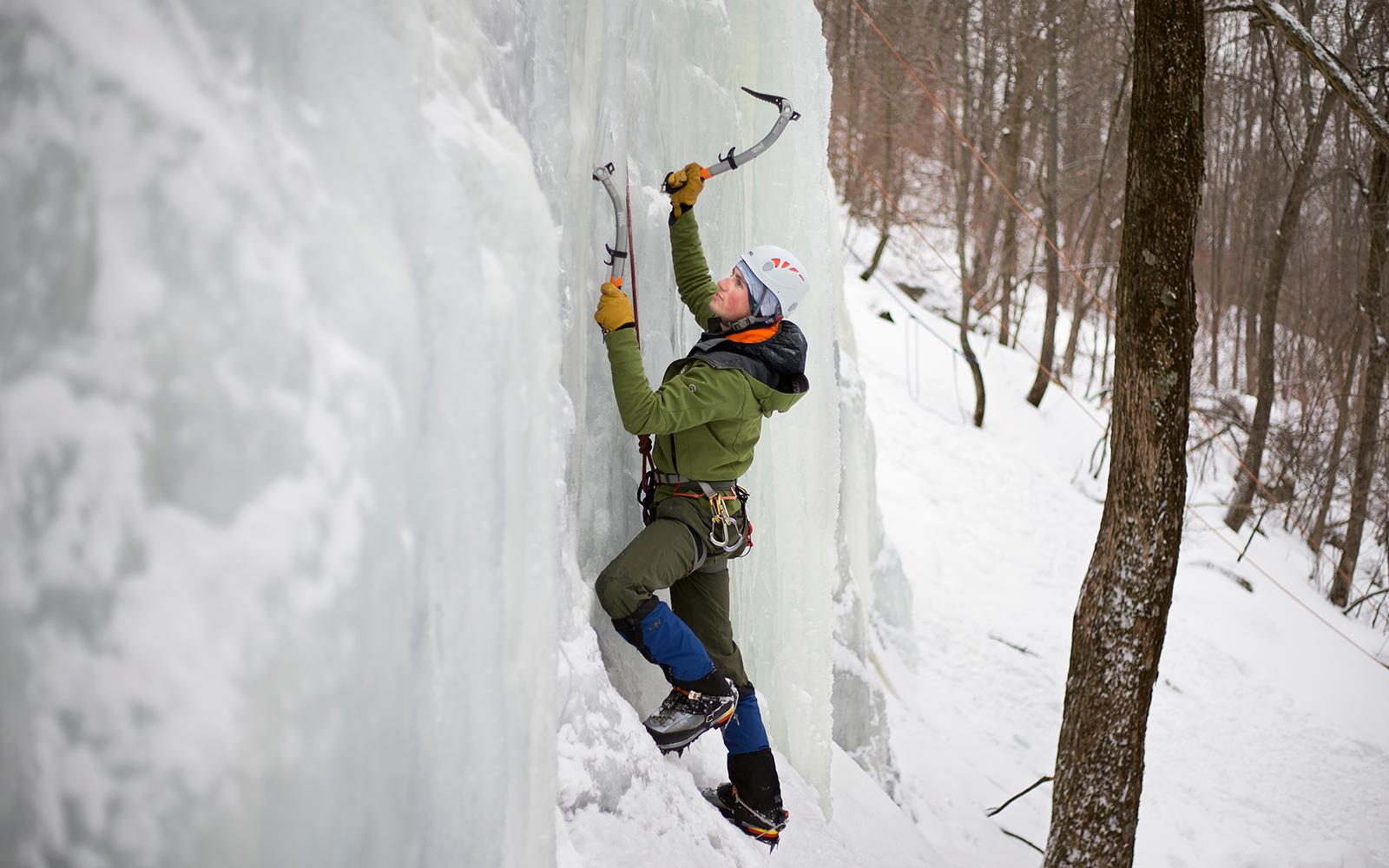 When he wasn’t out on an adventure through the wilderness education program, Keough was busy working on his Presidential Scholars project. He traveled to Canada and conducted research on the sedimentology and stratigraphic cyclicity at the Clifton Formation in New Brunswick. He worked closely with Rygel and Assistant Professor Dr. Page Quinton to identify patterns (referred to as cyclothems) in 300-million-year-old sedimentary rocks.

While traversing a 12-kilometer-long section of beach, they studied the rock deposition layers of the impressive rock wall extending away from the shore. “We measured those layers, the thickness, and we took notes of all the details, the color, the type of rock (sandstone or a mudstone), and any kind of subdivisions within that,” Keough said. “I can’t say enough about how great Rygel and Quinton are! We sat down and talked about the research like colleagues. That was really great, the fact that both of them gave me that experience.”

In recognition of his project, Keough received the Frederick B. Kilmer Research Award his senior year—first place in the science category—as part of SUNY Potsdam’s annual Learning and Research Fair. “Brandon is probably one of the most promising students I ever had the pleasure of working with. His work on the New Brunswick research project is on par with work I would expect from students at the graduate level. Brandon’s music and wilderness education training, which have taught him important skills in time management, organization and dedication, made significant contributions to his success,” said Quinton. “He is a paradigmatic example of the value a liberal arts education can provide. I believe his success as a geology student is a direct result of his organization, excellent time management and his confident decision-making."