The Man Behind the Lens

If you’ve recently gazed on photos of Jupiter’s murky gases or a panorama showing unprecedented detail on the surface of Mars, chances are, you were seeing Daniel Krysak’s work.

Krysak ’08, who graduated from SUNY Potsdam with degrees in both speech communication and archaeology, with a minor in geology, is living the dream of just about every techie and space buff. Part of a team tasked with building and commanding space cameras, he’s among the very first to see the images from our technological and spatial frontiers.

An operations specialist at Malin Space Science Systems in San Diego, Krysak is elbows deep in three separate NASA missions. The first is the Mars Science Lab Curiosity Rover, whose six wheels touched down on the Red Planet in 2012. Malin, where Krysak has worked for eight years, built the rover’s mast camera, an instrument using two lenses to create a mosaic of smaller images that are then stitched together to create a much larger panorama. His work includes highly technical writing of the programs that send imaging commands to rovers and spacecraft, and managing databases that hold thousands of photos.

Krysak has been a huge space enthusiast since his childhood in Binghamton, N.Y. An explorer at heart, he has seen his life complete a cosmic full orbit.

“When I was 12 years old, the Sojourner rover landed on Mars and I watched the team at NASA on live TV celebrating its successful landing,” Krysak remembered. “That moment always stuck with me and 15 years later, I was at NASA’s Jet Propulsion Laboratory watching Curiosity land, now working in the exact same position as the Pathfinder/Sojourner team had done all those years earlier watching their spacecraft land.  It was a great moment for me to be able to say that I'm now one of the members of the spacecraft team celebrating our successful landing on Mars.” 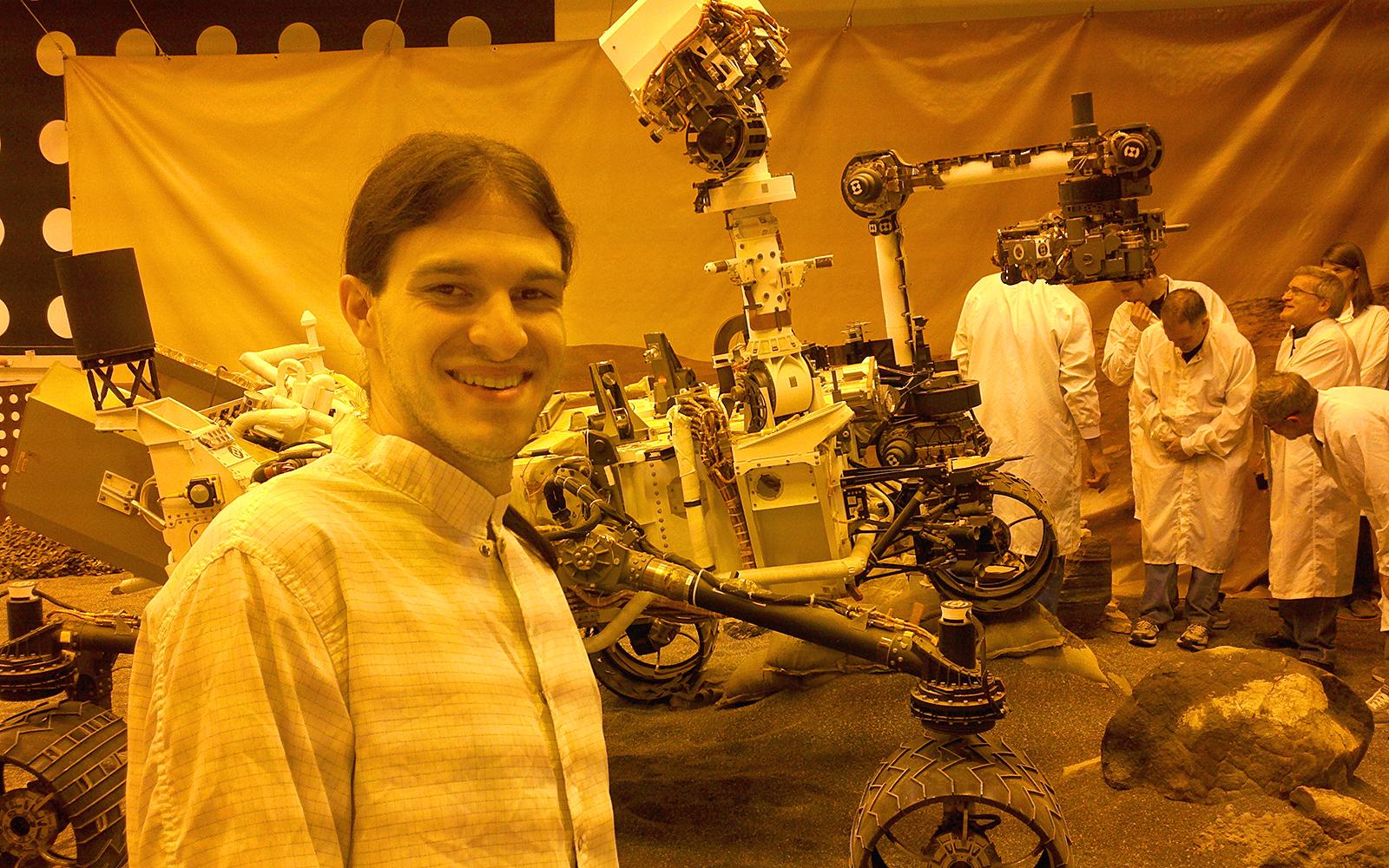 Daniel Krysak is seen with a test rover at NASA’s Mars Science Laboratory. The image appears orange because it that was taken inside a testing area made to simulate light in the martian atmosphere.

Krysak also works on the Juno mission to Jupiter. He commands camera lenses to take images at particular locations on Jupiter’s surface and is responsible for making sure the instruments stay safe in high radiation environments. Juno has been orbiting the gas giant since July 2016 to determine how much water is in Jupiter’s atmosphere. The spacecraft is mapping magnetic and gravity fields and examining how the planet’s huge magnetic force field affects its atmosphere. The orbiter is traveling in a north/south orientation around the planet, giving close-up views of polar regions that are impossible to obtain with terrestrial telescopes because Jupiter is on the same orbital plane as Earth, Krysak said.

The orbiter is also carrying an outreach camera known as the JunoCam, which allows the public to decide what is imaged. The JunoCam website creates a forum for discussions about the mission and its photos.

“Users are able to take our images, process them in whatever way they'd like, and resubmit them to the website for other to see,” Krysak said. “You don't need to be a scientist or someone working at a professional organization; everyone of every age is free to join in on the fun.” 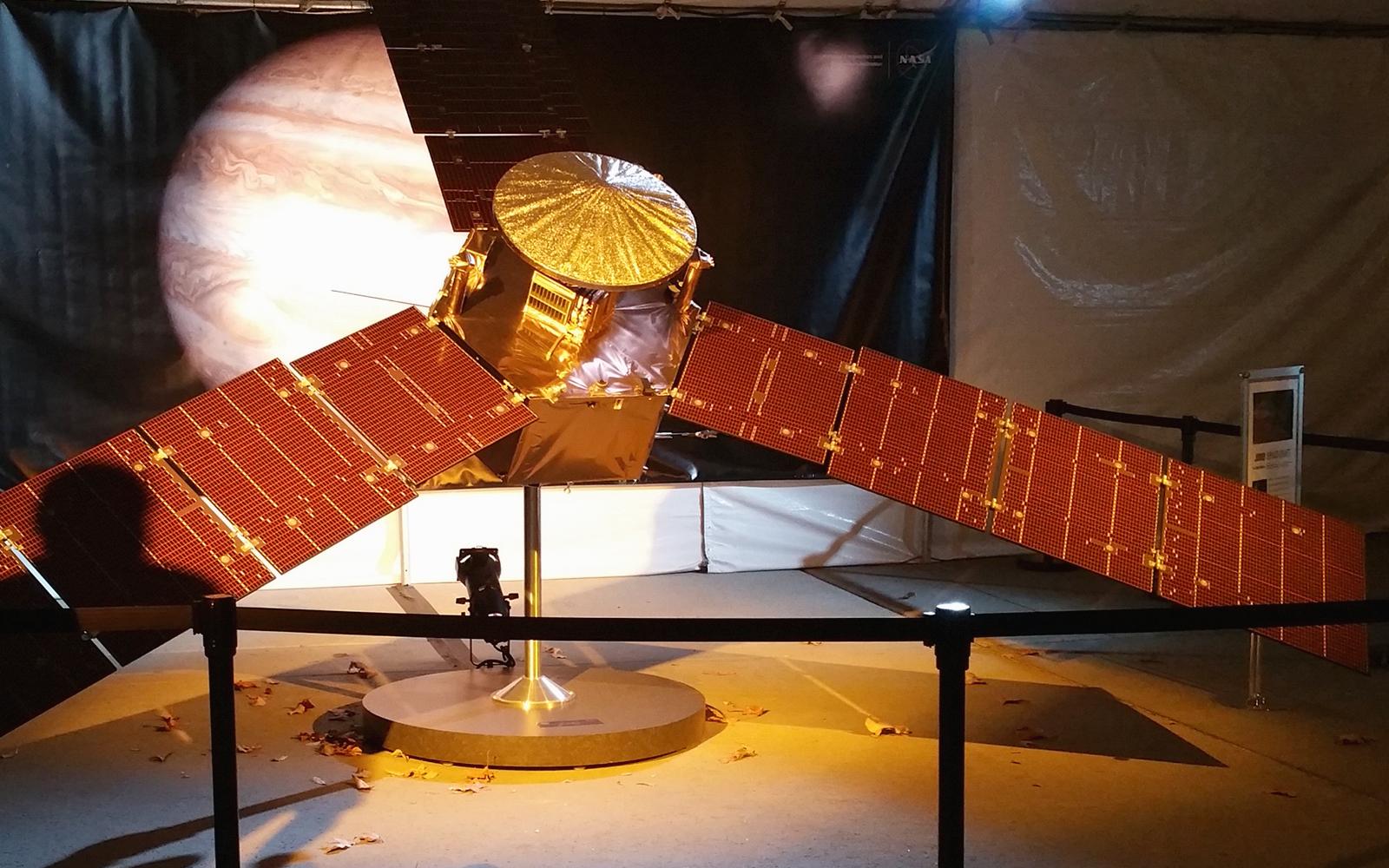 A ¼ scale model of the Juno spacecraft on display at the NASA Jet Propulsion Laboratory. Krysak operates cameras aboard the craft, now in orbit around Jupiter. Each of the three dark red/brown solar arrays are about the length of a school bus in real life.

There is more fun ahead. The Mars Perseverance Rover is a developing NASA project set for launch in July, with innovations that will include the SHERLOC imaging system. Krysak is excited about the possibilities of the vehicle, whose mast camera will be equipped with a new zoom feature. The rover will also have both imaging and spectroscopy equipment mounted on the end of an arm, allowing for extreme closeups of the terrain.

“This is the same idea as when geologists use a hand lens to view rocks up close and see very fine details,” Krysak said.

Completely new equipment for the Perseverance includes the RIMFIX, a ground-penetrating radar system. And the MOXIE system is onboard technology for creating minute amounts of oxygen from the carbon dioxide in the Mars atmosphere, helping scientists plan for future missions that could include a human crew. The rover will search for traces of habitable conditions and life in Mars’ ancient past.

Krysak, who received his master’s degree in planetary volcanology from the University at Buffalo, is helping push the frontiers of robotic space exploration. Courses at SUNY Potsdam gave him a foundation for both graduate school and the rigors of his ensuing career. Programming classes, geographic information systems, and mapping and communication courses helped build skills he uses almost daily on the job.

“In my first geology class at Potsdam, my professor had mentioned a field named planetary geology and that immediately got my interest,” Krysak said. “After doing some research about the field, I knew exactly what I wanted to do with the rest of my life.”