The Path of Persistence

Sometimes, Angella St. Denis ’21 dreams of all the sleep she will catch up on—hours and hours of uninterrupted slumber awaiting her someday in the not-so-distant future—once she finally graduates, once she finally lands that career helping young people, once she finally finds a bit of inner peace after years of seeking justice.

But for now, she continues to toil night and day, in pursuit of her degree and of her dreams.

For the past nine years, Angella has worked as a cleaner at SUNY Potsdam, and for most of that time, she has worked the night shift, from 3:30 p.m. to midnight. In normal years, when she arrived at work, students and faculty were still flitting in and out of classrooms, grabbing dinner and stopping to chat, while she started cleaning offices and classrooms in Carson and Morey halls. Since the onset of the pandemic, campus life has been more quiet than usual, meaning that much of her shift is solitary and still, rather than just those final late hours after most people have retreated to their homes or their dorm rooms. But she still has plenty to keep her mind busy. 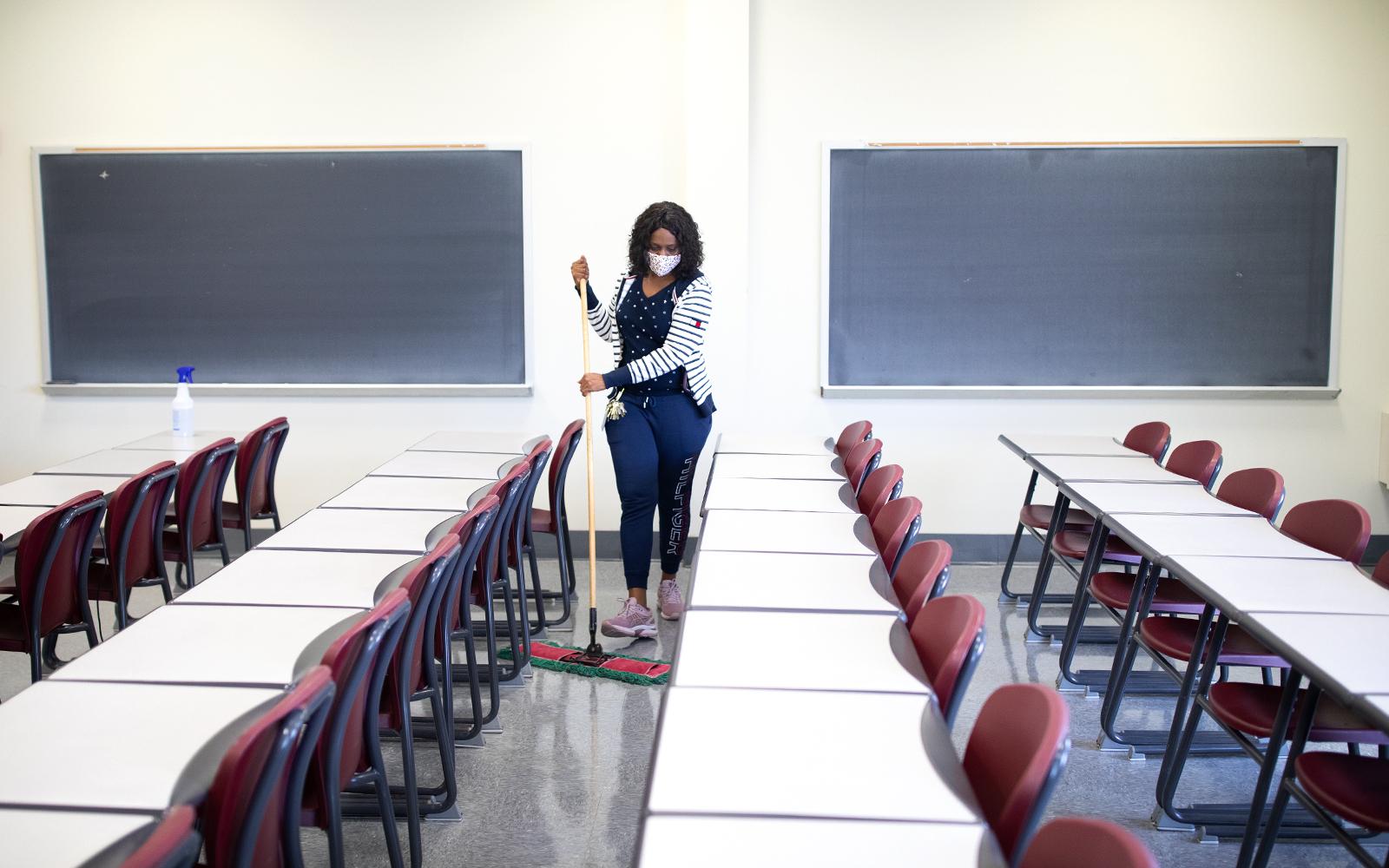 “Every moment of the day, I’m doing schoolwork. On my break, I have my books with me. I wake up in the night thinking about my classes. I’m not someone who even thinks about wasting time. I don’t have time to spare,” Angella said. “I have to elevate myself. No one is going to do it for me.”

As both a full-time student and a full-time employee at SUNY Potsdam, Angella has learned to make the most of every moment. She makes it a point to get assignments done early—especially since she has learned through experience that she can’t study after getting home from work so late.

“I’d rather wake up early and keep going. By the time I get home at night, my eyes can’t see. I just need to close them. My brain needs to rest. After about six hours though, I’m just up for the day,” Angella said. “Sometimes I think, imagine how much I could do if I didn’t have work on top of classes. You really can do so much, though. You just don’t know until you try.”

Angella remembers the day that she moved to the United States so clearly. It was April 16, 2010, and it was freezing. She asked her then-husband how the houses here were made. They looked so different from the cement block homes she was used to, growing up as one of nine children in the Caenwood Road District, Hope Bay, in Portland Parish, Jamaica. The North Country’s cold weather was a shock too, coming from Caribbean temperatures in the 80s. Still, she began to carve out a life here for herself and for her son, Jordan Burnett, as she started pursuing her GED and American citizenship.

“Angella is a success story demonstrating the value of a public education, perseverance and hard work.” –Dr. Nancy Lewis 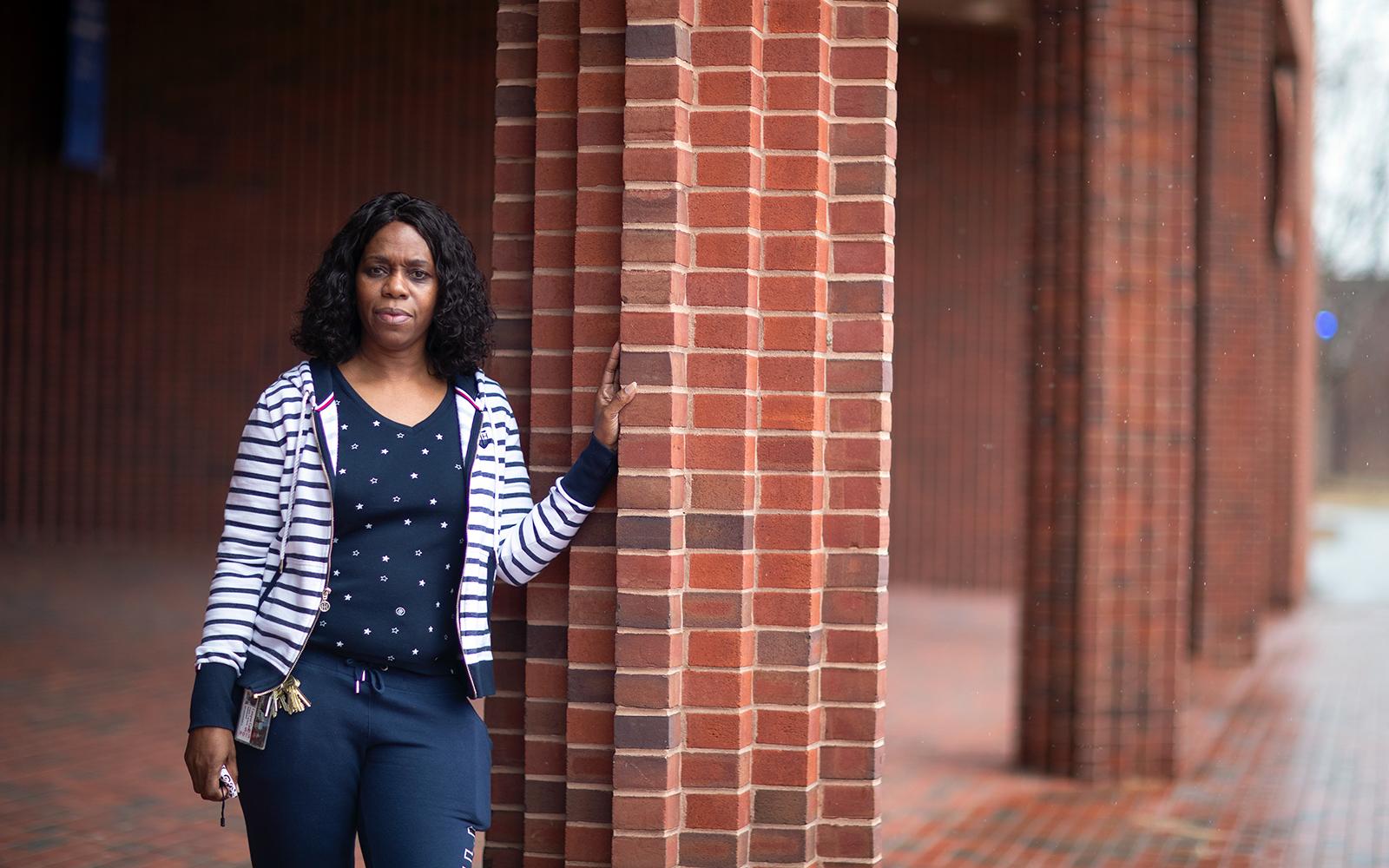 “I stopped and started with the GED classes. It was such a different system than what I was used to. But in the end, I passed all my subject tests at once,” she said. “Once I got my GED, I was immediately asking, ‘OK, What now?’ I was working here at SUNY Potsdam, and I thought, ‘I’ve got to do this. I’ve got to go to college.’”

In December 2017, she started her undergraduate studies. Angella remembers meeting with an advisor in Sisson Hall, who asked her what she might like to study. Without a second thought, she said she wanted to declare a major in criminal justice studies. She felt drawn to the field by the deep tragedy she had experienced in her own life. Angella was 18 years old when her mother was murdered by a neighbor, who she says was mentally ill.

“Your mother is supposed to be your best friend. You think you’re going to have your mother for the rest of your life. I was robbed of that. I don’t feel we got justice. I cry every day,” Angella said. “If somebody takes a life, they have to pay for it. It’s not something you’re going to get back. If someone is insane like this man was, they belong in a mental institution, getting treatment.”

In her Introduction to Criminal Justice Studies class in Spring 2017, Angella found both a deep curiosity about the field she was majoring in and a mentor for her academic journey—Dr. Nancy Lewis.

“It was wonderful to see the flashes of lightbulbs going off all around Angella as she connected with the information presented in the class,” Lewis said. “She was inquisitive, asking great questions, and she did all the work and attended all the classes. She connected the academic research to her own experiences of the world. And she was excited by the things she saw when she applied different theoretical lenses.” 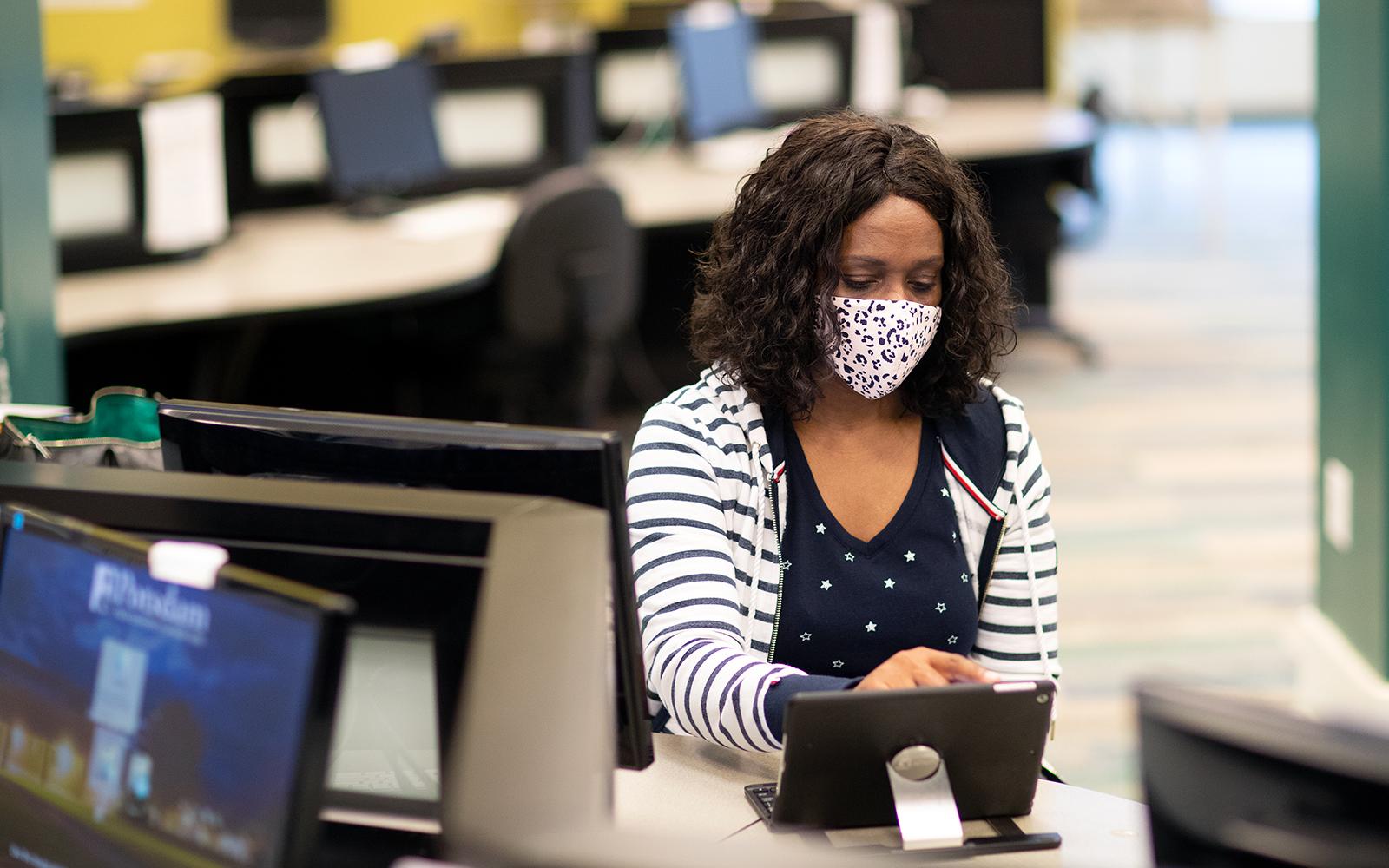 Some of Angella’s other favorite classes have been taught by Dr. Jeremy van Bloomestein and Dr. Anna Sorensen. She has been pleasantly surprised to find that she has taken inspiration from classes outside her major, too.

“Your eyes are opened to stuff you would never think about—different cultures, different religions, different ways of life. It’s so important. You’re not going to be in one place for your whole life. You’ve got to be prepared to go out in the world,” she said.

Throughout her studies, Angella has returned to Lewis for advice and guidance, and now the faculty member is her internship advisor on a semester-long project, assisting with the Community Policing Advisory Committee. Through her internship, Angella is gaining skills in survey design and focus group research, as well as collaborating with other students and employees, as she helps to understand and strengthen the relationship between University Police and the campus community.

“Professor Lewis is a role model. I don’t know how to repay her for everything she has done for me,” she said.

As she prepares to wrap up her last two semesters, Angella is beginning to think about what path might lie ahead, taking advantage of career services through the Lougheed Center for Applied Learning. She’s starting to dream about finding a job working with youth, and hopefully moving to be closer to her siblings living in Georgia or Florida.

“I’m all about upliftment. When opportunity comes, you have to take it.” –Angela St. Denis ’21

“I’ve always wanted to work with juveniles. A lot of them never had a good life. The system takes them and nobody ever really spent time with them,” she said. “Having that family structure is so important, even if it’s just one parent or role model. For my son, he will always be my baby boy to me. I say, no matter where I go, there will always be a room for him.”

Her son is about to wrap up his own associate degree from nearby SUNY Canton, and always teases his mother that she doesn’t need anyone to push her—she’s got enough drive to motivate herself and others. Indeed, in recognition of her excellent internship work, the Department of Sociology and Criminal Justice is set to honor Angella with an Applied/Experiential Learning Award this spring.

In the homestretch now, Angella is getting ready to register for her final remaining classes as she prepares to complete her bachelor’s degree in December 2021—finishing her studies in just four years, meaning those glorious hard-earned hours of rest and reflection she has been so looking forward to are not far beyond the horizon.

“The best descriptor of Angella is persistent. She works really hard. She identifies where she needs to improve her skills, and she does it,” Lewis said. “She will make Potsdam very proud.”