At just twenty years old, Victoria Sekyere ’23 has already published a book, started a non-profit organization, and is in the process of applying to law school as she wraps up her degree in criminal justice with a minor in pre-law at SUNY Potsdam. 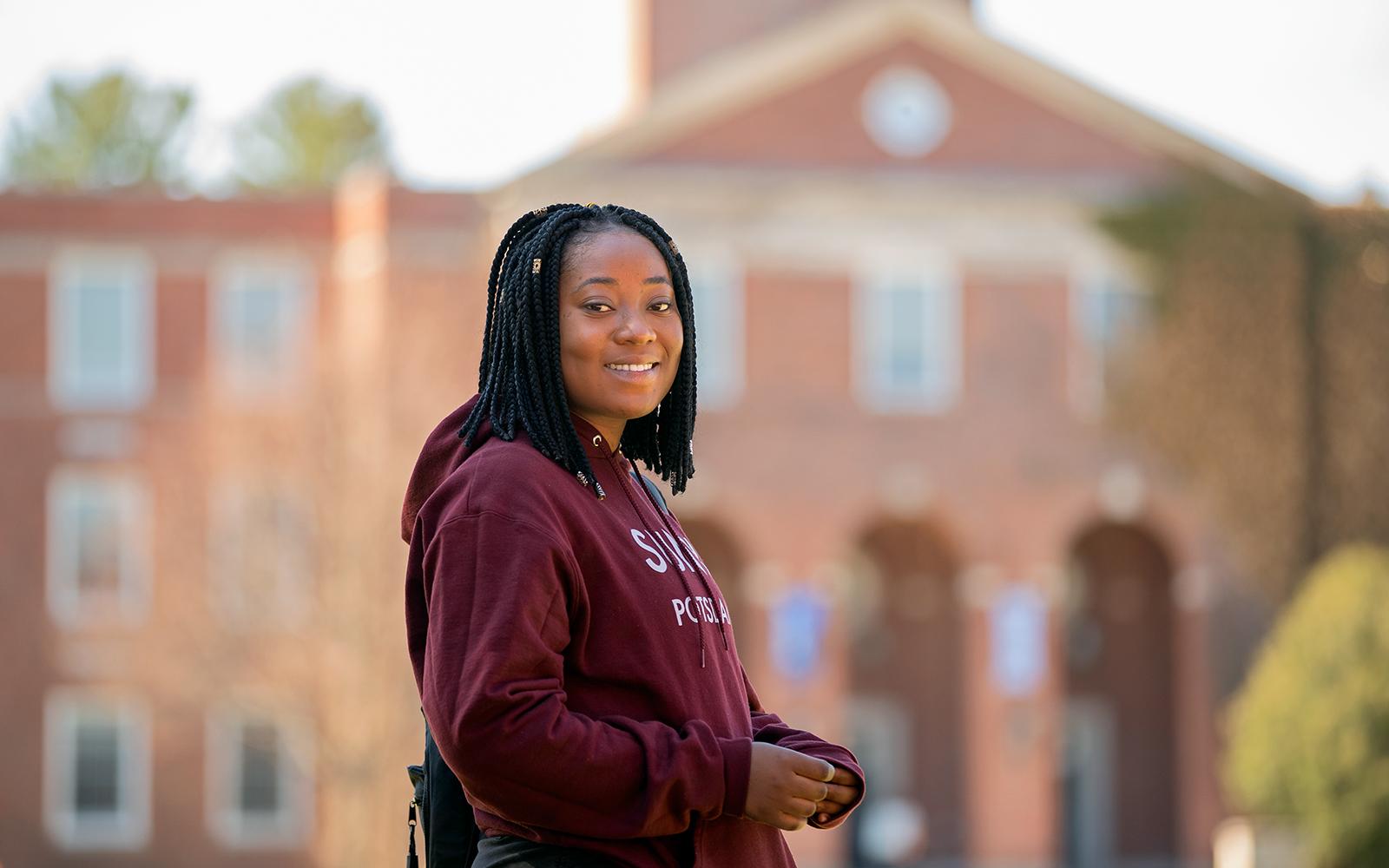 "I love the professors and the supportive staff. I like the feel of a community here at SUNY Potsdam, it’s amazing.”

Her drive for excellence dates to her youth. Raised in Kona, a rural area of Kumasi in Ghana, Africa, Sekyere understood the value of a good education at an early age. Guided by her father’s ideals, hard work and a passion for learning were an integral part of her upbringing. “He was the first person in my family to go to college, to become a teacher. He always instilled in us that education was key,” Sekyere said.

When she was 11 years old, Sekyere and her three older brothers moved to the U.S. to live with their mother. At first, cramped into a one-bedroom apartment in Yonkers, they later moved to a larger building in the Bronx. When she graduated from high school, she enrolled at Westchester Community College to pursue a degree in biology, while also working as a phlebotomist for Impact Health Biometric Testing, a company that administers vaccines and covid tests.

“Because most of my brothers are in the medical field, my mom wanted me to become a doctor very badly. It’s always been her dream to have a daughter who was a doctor,” she said. “I went to a community college for two years as a biology major, but I did not like it. I was bored in every class, and I wasn’t doing good on the tests. I was like, ‘OK, this is clearly not something I’m interested in.’”

In the fall of 2021, she decided to make a change and she transferred to SUNY Potsdam. “Potsdam seemed like a great place. I visited and I fell in love with it. Because I live in the city where it’s noisy, now I get to actually sleep. It’s very calming. I love it here,” she said.

Her first semester on campus she pivoted from the medical field, and discovered an academic path that was a much better fit—a degree in criminal justice with a minor in pre-law. “I realized that I was doing really good in my classes, and actually interested in it,” she said. “I like sitting in class and learning about the criminal justice system, and learning about things that need to change,” she said. 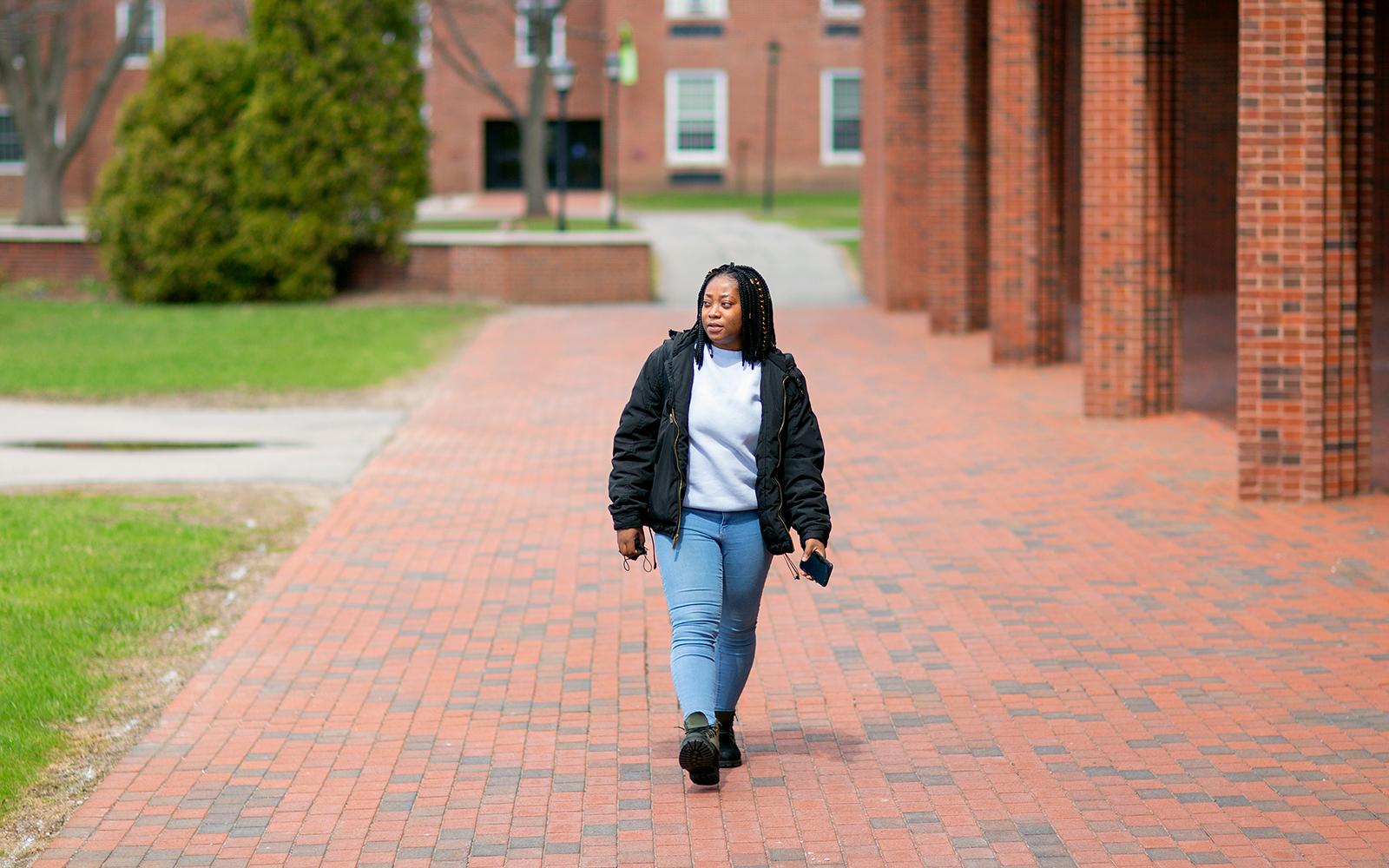 Combining courses from the Department of Sociology & Criminal Justice with pre-law classes from the Department of Politics has given Sekyere the background knowledge that she needs to succeed in law school. Supportive faculty like Dr. David Bugg and Dr. Robert Hinckley have been with her every step of the way. “I’m really grateful that I encountered them. Dr. Bugg is one of the people who truly believe in what I’m trying to do. He’s been really supportive,” she said. “And Dr. Hinckley is the sponsor for my internship. I talk to him regularly and he’s also writing one of my letters of recommendation for law school. He’s amazing. I love the professors and the really supportive staff.”

Beyond the classroom, Sekyere has found support through the Collegiate Science & Technology Entry Program (CSTEP). As she applies to law school, CSTEP has been helping to cover her Law School Admission Test (LSAT) prep course costs, and application fees. “It’s probably the best organization that I’ve gotten involved with since I got on campus,” she said. “It’s very beneficial. They do resume review and mock job interviews. They talk to you about how to build relationships with your professors, time management, what’s expected in grad school, and the application process.”

Mirroring the support she has received at SUNY Potsdam, Sekyere recently launched a non-profit organization, Take a Look Back, to help children in orphanages in Ghana. “You see really smart people with a lot of potential who just didn’t have the opportunity to pursue education further, so I just wanted to help out a little bit,” she said.

Launched in December 2021, her new organization has 12 members, including five board members with Ghanaian roots who now live in the U.S. Three events are in the works at orphanages in Kumasi, with the first being held in June. Sekyere and her volunteers will be providing children with book bags, pens, pencils, crayons, and other school supplies, as well as hygienic care items and food. As the founder and CEO, she has taken the lead on financing the new non-profit by donating the scholarship money she received this semester for her internship. 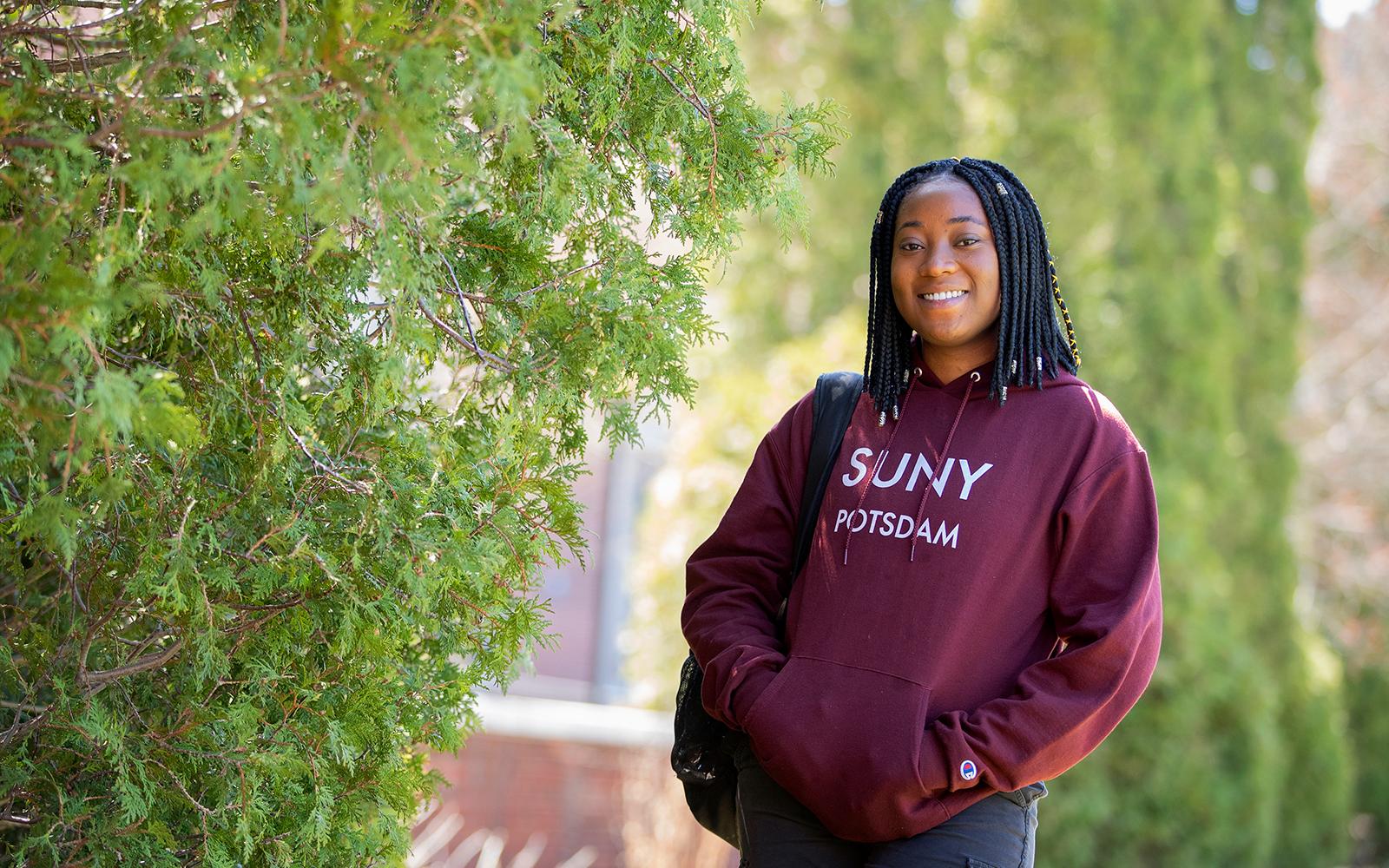 Outside of academics and her non-profit work, she has also authored a book of poetry, “A Trail of Time,” which can be purchased on Amazon or Barnes and Noble. The newly published book taps into personal loss in her life and focuses on love, family life and family dynamics. “My dad passed away from cirrhosis of the liver when I was 16, and I had a very close relationship with him. It was just a way to express my grief, and poetry is the only way I feel comfortable talking about feelings,” she said.

Sekyere is now reflecting on her family once more as she writes a children’s book, “Nana Yaa and the Morning Prayer,” which focusing on the importance of religion in her grandmother’s life and the daily worship services she hosts at her home in Ghana. “My grandmother started the Seventh Adventist Church in my village when I was young. In the morning, around 5 a.m., a bunch of people all over the village would come to my house for worship,” she said. “When I go to Ghana and share a room with her, she wakes me up at 4 a.m. and says, ‘Let’s pray.’

Her connection to her homeland remains strong even as she continues to make a new home at SUNY Potsdam while pursuing her undergraduate degree. “It’s my favorite place to be. I don’t even like going back to the city. I like the food and I’m always eating at Becky’s Place. I love the professors and the supportive staff,” she said. “I like the feel of a community here at SUNY Potsdam, it’s amazing.”

This summer, as she prepares for her senior year at the College, she will be taking the LSAT and applying to 15 law schools, with the goal of becoming a law professor—an opportunity for her to be a teacher like her father, and follow in the footsteps of her professors at SUNY Potsdam.

To learn more about the Department of Sociology & Criminal Justice, visit: https://www.potsdam.edu/academics/AAS/depts/socio

To learn more about the Department of Politics, visit: https://www.potsdam.edu/academics/AAS/depts/pols