From working on the floor of the New York State Assembly to helping with hurricane recovery efforts in Puerto Rico, Julissa Santana ’20 is graduating from SUNY Potsdam with unrivaled hands-on experiences.

When she was just 13 years old, Santana left her home in the Dominican Republic for a completely new beginning in New York City. She enrolled in an international high school in Brooklyn focused on improving students’ English language skills and adapting to a new culture. “It had a curriculum specifically for students with less than five years in the country. We all struggled together, and we made it through. I had a great support system,” Santana said.

She found a similar atmosphere of encouragement at SUNY Potsdam. “I like that it was far from home. I also like the fact that SUNY Potsdam looks at prospective students as a whole, and not just their numbers.” -Julissa Santana 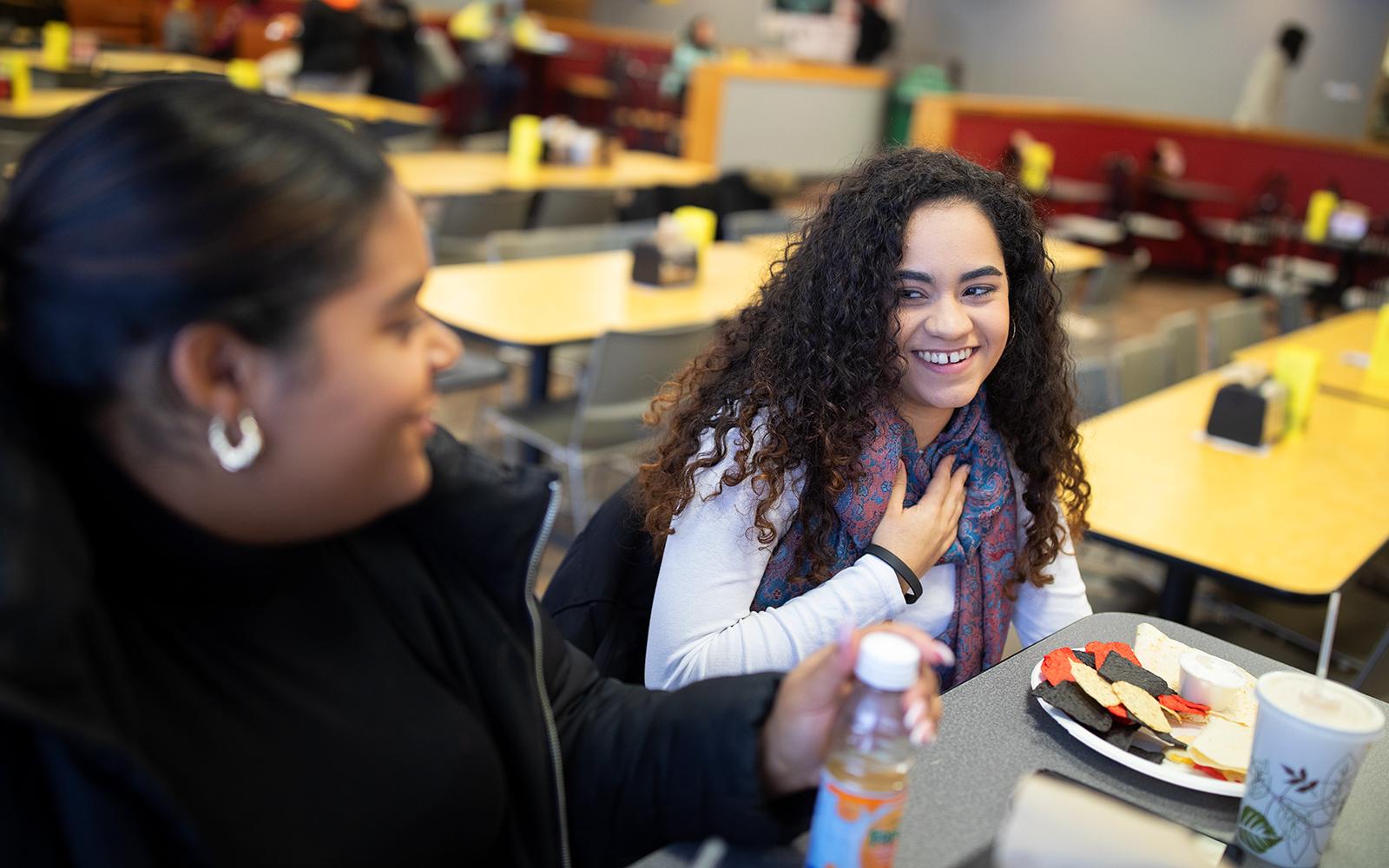 She immediately got involved with clubs and organizations on campus, starting with Emerging Leaders, a program focused on leadership development. That was a springboard for her success as a resident assistant and involvement with other clubs and organizations including the wilderness education program. “I started to appreciate the outdoors and nature. I love kayaking. I love hiking,” Santana said.

Her adventures continued during the summer of 2018, when she and 22 other SUNY Potsdam students traveled to Puerto Rico to help with recovery efforts in the aftermath of Hurricane Maria—part of Governor Andrew Cuomo’s NY Stands with Puerto Rico Recovery and Rebuilding Initiative. Santana and her classmates removed debris from damaged homes, repaired roofs and completed other light construction projects. “It was amazing. It gave me a chance for me to do what I love: community service, helping my own culture, and learning about Puerto Ricans,” she said.

With her Caribbean roots, Santana played an important role in establishing strong lines of communication between the volunteers, and the people of Puerto Rico. “I was one of the main translators for our SUNY group. It was definitely beautiful to see that I was that small bridge between the local people and our group,” Santana said.

During the trip, she met Krista LaVack, the director for International Education and Programs at SUNY Potsdam, who was instrumental in supporting Santana’s future endeavors. In the spring of 2019 Santana lined up an internship in the New York State Assembly. She was accepted and had to quickly make plans to move to Albany. LaVack stepped in and provided her with housing advice and scholarship assistance. “She’s always been there as a support system and has always given me guidance and advice about my next move,” Santana said about LaVack. “Without that woman, I wouldn’t have gone a lot of places.”

For four months, Santana immersed herself in the legislative process at the New York State Capitol working for Assemblywoman Carmen Arroyo from the 84th district (Bronx, NY), the first Hispanic woman to be elected to the New York State Assembly. Santana helped run the day-to-day operations in Arroyo’s office, meeting with constituents from the district. She would gather their information, draft memos, and send them to the district office in the Bronx. “My favorite aspect was definitely getting to know the legislative process from the inside. It was seeing the people making a change, the Assemblymembers walking down the hallway after they passed a bill,” she said.

Things were always exciting on session days when the Assemblymembers gathered in the chamber to pass laws. Santana remembers meeting with constituents during one of those days. “This group of 15 to 20 people from the Bronx, an organization called CASA, came into the office to talk about housing. They started telling me about living situations, showing me pictures, and they had testimonies of people whose houses and apartments were in horrible conditions,” Santana said. “The landlord wasn’t doing anything, but they still wanted to raise the rent. It really touched me. At that moment I told them, ‘I’m an intern right now, but outside of this building I’m a student and I live in Brooklyn, so I know your living conditions.’”

That conversation helped to spark change. Assembly Bill A8281, enacting the "Housing Stability and Tenant Protection Act of 2019," offered protections for tenants in Arroyo’s district. It has since been signed by Governor Cuomo and was passed into law. 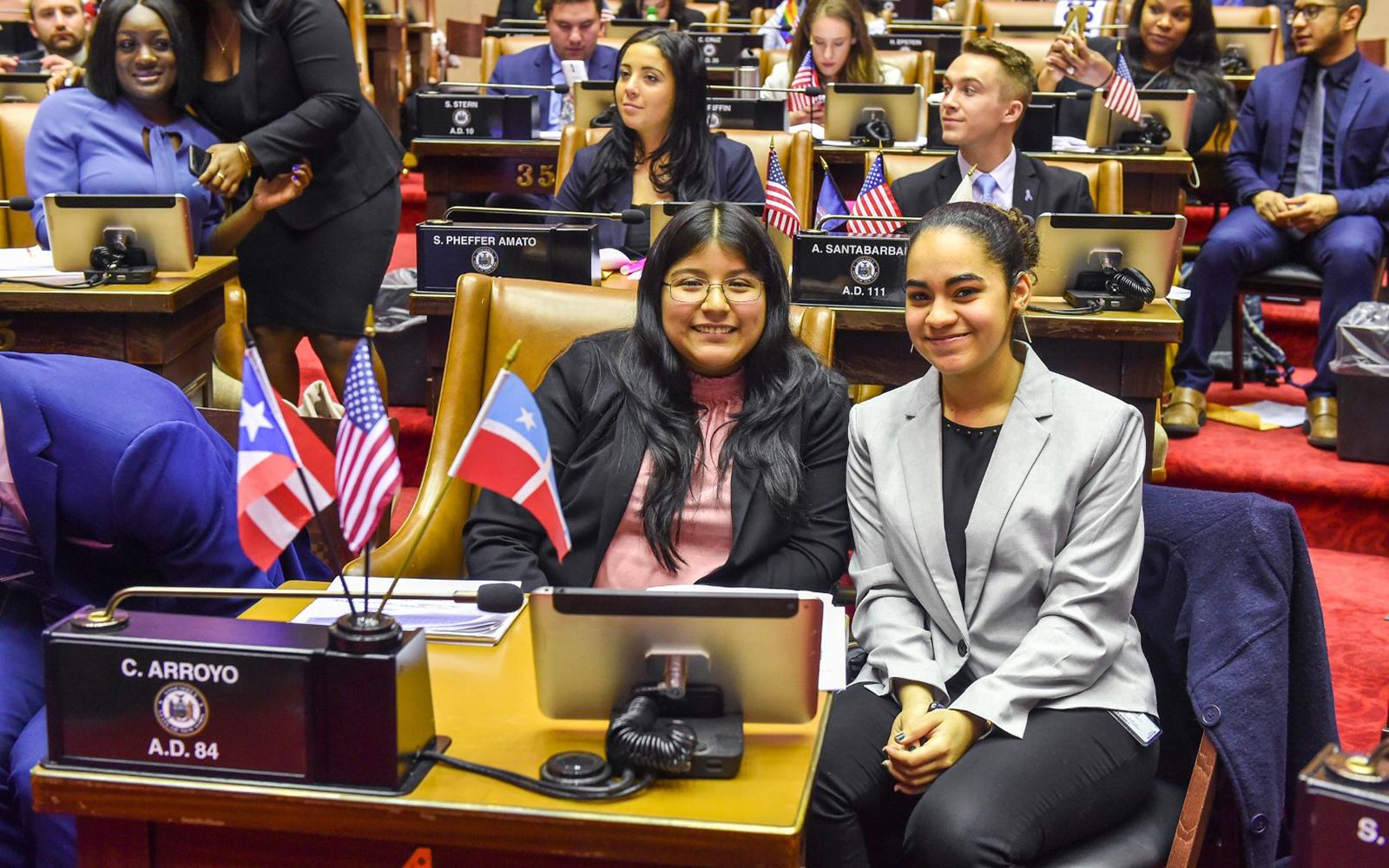 Santana, right, poses for a photo with Prijenett Flores, another intern working in Arroyo's office, during a New York State Assembly mock session.

The internship culminated with a mock session, one of the most impactful experiences, where interns were able to sit in their Assemblymember’s chair and represent their district. “That was definitely empowering. Not everybody gets that experience of playing your Assemblymember,” Santana said.

When the summer rolled around, she lined up another world class experience, the Public Policy and International Affairs Junior Summer Institute, a highly competitive program at the University of Michigan. Only 24 applicants nationwide are selected for the fellowship. “It was the best experience of my life. It gave me the support, connections and insight of what I needed and what I now know I have to do if I want to work for the Department of State.”

The six-week program introduced her to graduate level courses, writing a research paper and attending conferences. “We had forums with people from the Department of State and ambassadors who would come and talk about their experience and research. Now I have a network for life,” she said. “I met students from around the country. We had amazing debates and amazing discussions about our own states.” 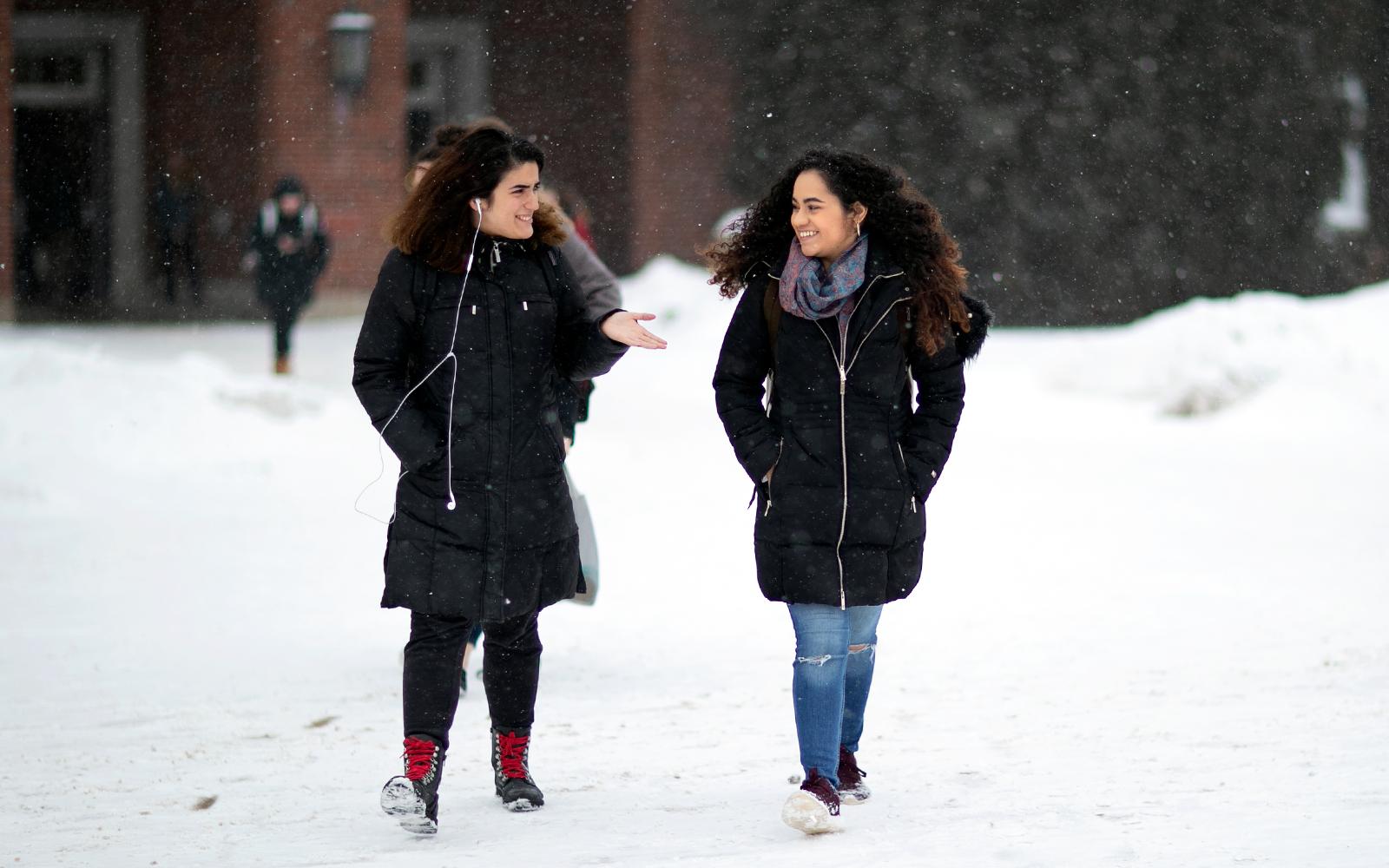 With so many experiences already under her belt, she returned to SUNY Potsdam for her senior year to continue her work with faculty members in sociology and criminal justice, Nancy Lewis, David Bugg and Jeremy Van Blommestein. It was because of Lewis that Santana initially chose to pursue the field of criminal justice. “I think the criminal justice program at SUNY Potsdam is very strong. The instructors know what they’re doing, and they have great connections for different internships,” Santana said. “I like how the CJ major offers courses in the St. Lawrence County Jail. I took two courses with the inmates there and it was a magnificent experience.”

For her second major, international studies, she relied on the expertise of Michael Popovic, coordinator for the international studies program. The opportunity for face-to-face interaction with faculty at SUNY Potsdam is unlike anything found at larger universities. In addition to taking unique courses like International Conflict with Popovic, he was also a mentor, advising her about graduate school options. “He has been my guide through this complex world of international relations,” she said.

For her minor, in the Department of Modern Languages, Santana learned about Spanish linguistics, culture and identity. She made lasting connections with professors Liliana Trevizán and Oscar Sarmiento. “I’ve learned more about my culture here, than I had in New York City. They were great mentors for me,” she said.

As a semester like no other comes to a close, Santana looks ahead to a potential teaching position in Colombia, after being selected as an alternate for the Fulbright English Teaching Program. She also has her sights set on graduate school for international affairs, criminal justice or international law. “My dream job would be to work with the DEA (Drug Enforcement Agency),” she said.

To learn more about the Department of Sociology & Criminal Justice, visit: https://www.potsdam.edu/academics/AAS/depts/socio

To learn more about the Department of Politics, visit: https://www.potsdam.edu/academics/AAS/depts/pols