Leader Among his Peers

Even as a freshman, Jason Perregaux ’21 revealed a maturity beyond his years. His confidence, welcoming demeanor, and motivation to help others set the stage for leadership roles at SUNY Potsdam—everything from working as a resident assistant to a peer advisor in the Lougheed Center for Applied Learning.

After spending his freshman year in Bowman Hall, he returned as a RA (resident assistant), and has continued that role every year since, providing guidance to first-year students who are navigating the complexities of a new life at college. Whether a student needs help finding their class, or has questions about their meal plan, Perregaux is just down the hall to lend a hand.

“My approachability and my friendliness are just a part of who I am,” he said. “It's just about having compassion for one another, and while that's not necessarily in the residence life guidelines, for me that’s what separates a good RA from a great RA.” 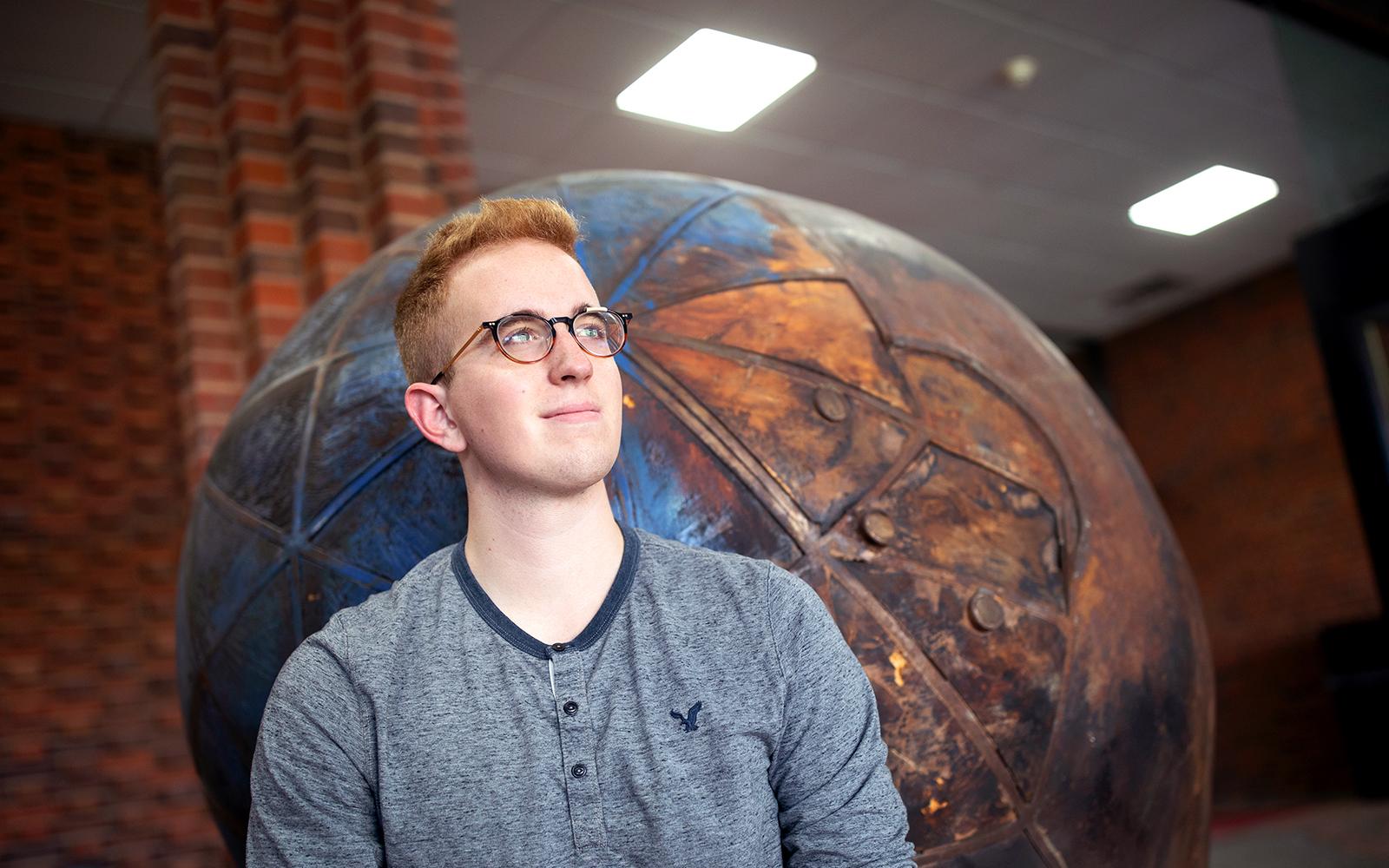 His leadership efforts continued in the Lougheed Center for Applied Learning, a one-stop-shop for students seeking internship advice, study abroad information, resume review and career guidance. Initially, he worked as a marketing coordinator, helping to spread the word about student services offered at the center. “There's a myriad of things that the Lougheed Center for Applied Learning can do to help students prepare for the future,” he said. “Apparently being a marketing assistant worked, because we were getting so much traffic that the professionals needed a student buffer.”

Perregaux stepped up to the plate. Just a sophomore himself, he was promoted to the role of peer advisor, tasked with giving other students feedback on their resumes and cover letters. “How to look for jobs, how LinkedIn can be used to make serious connections in the business world—there was a lot that I learned from that position, and there's a lot that I was able to share with people,” he said.

While helping others, Perregaux was also trying to figure out his own path. He entered SUNY Potsdam without a specific academic direction, taking classes from many disciplines to find the best fit for himself. It all started with a career and major exploration class with Toby White, the director of experiential education. “That gave me a lot of comfort knowing that I could walk around campus not having an idea what's happening when I graduate, and it was OK,” he said. 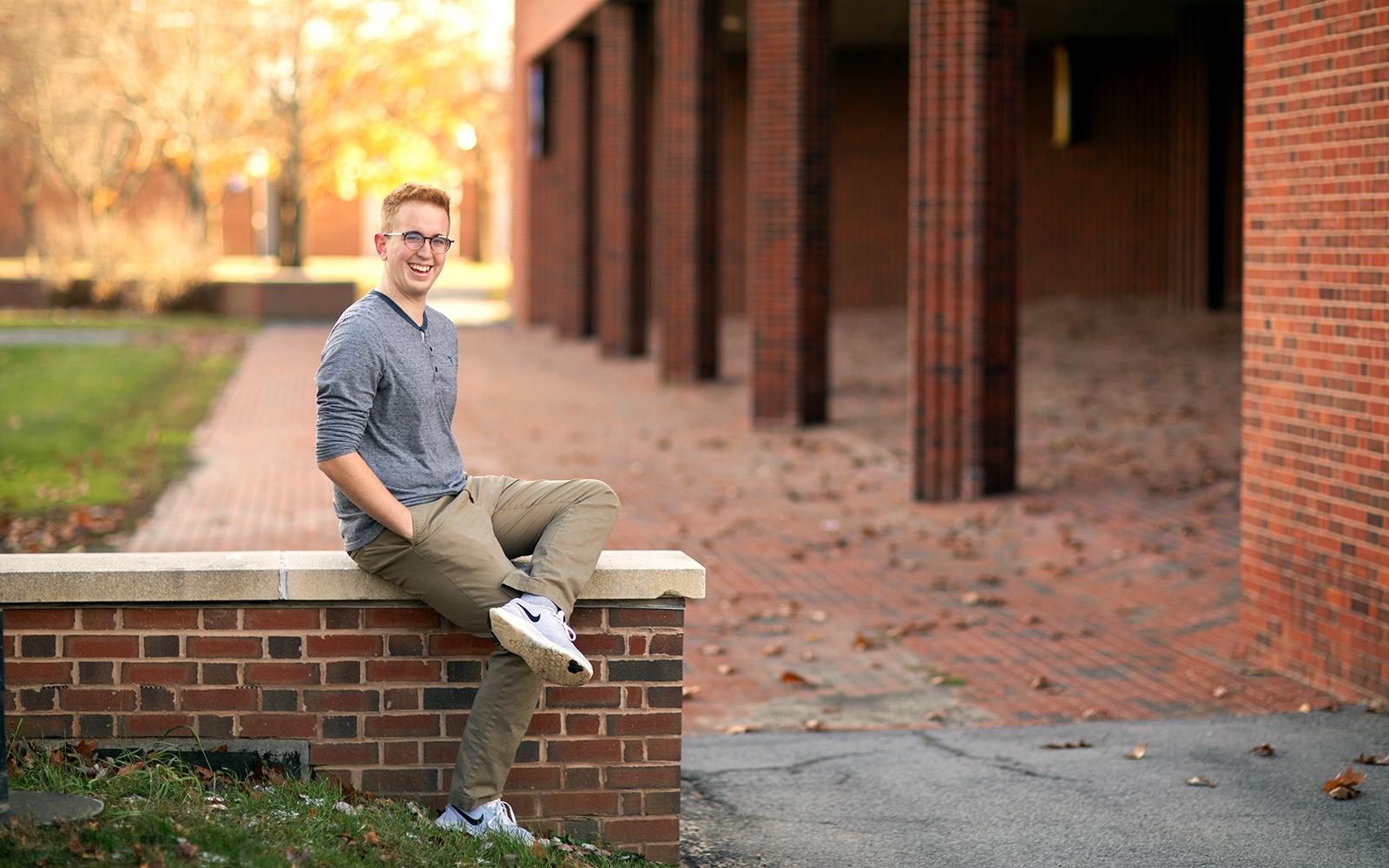 At first, his love of music led him to The Crane School of Music, and although his prospects for playing the saxophone and pursuing a degree at Crane didn’t come to fruition, he still joined the Hosmer Choir his freshman year. “It’s taught by Dr. Nils Klykken, who is absolutely outstanding. He's a phenomenal human being and has a great understanding of vocal pedagogy,” Perregaux shared. He also performed with the Crane Chorus, and later auditioned for, and was accepted into the Concert Choir. “I'm not sure the professor really knew that I wasn't in Crane. I was the only one there not taking theory, conducting, and thinking about student teaching— I was just there to sing.”

After exploring several options at SUNY Potsdam, Perregaux was determined to get a degree in business administration, in part because of his involvement in the University at Buffalo Undergraduate Case Competition his sophomore year. Two SUNY Potsdam seniors at the time, Illiana Wong ’19, and Claire Burns ’19, asked Perregaux, and Austin Cronk ’20 to join their group. They teamed up to provide a 20-minute presentation in front of a panel of judges at SUNY Potsdam, an analysis of an entrepreneurial case study. As one of the top presentations, they advanced to the Buffalo competition where they also excelled, and landed a spot in the finals. “To compete at that type of level was so much fun for me as a sophomore, who at the time was an undeclared business major,” Perregaux said.

Shortly after returning from Buffalo, Perregaux officially chose to major in business administration, a department that was feeling more and more like home to him—all starting with the welcoming approach of Diane Billings, a secretary in the department. “She’s a mother to everyone that walks into her office,” he reminisced. “I had breakfast there three or four times a week for a year and a half. She opened up her office, she brought in couches, she brought in snacks, meals, and all these things. There's a lot of support in the business program.”

This semester he’s taking an information systems class with Dr. Seon Levius. “He’s fantastic. He's a big thinker. He always pushes you to do the readings two or three times so that you really understand what's happening,” he said. “Part of why I chose the business degree is because the skills you learn are versatile. When you get your degree in business, there's a considerable amount of job mobility and that’s something that I value.”

His academic efforts and leadership roles on campus are bolstered by his Christian faith. He joined InterVarsity Christian Fellowship his freshman year, and has been actively involved ever since. He attended a Bible study group his first semester on campus, and was soon leading his own. “It's evolved from, ‘Let's sit down and talk about the Bible in a group, to let's meet up and talk about life.’ I really appreciated the opportunity that IV has given me. There's that common interest of our faith and we're able to have fun, sing, enjoy music and also learn more about each other.”

Much like his exploratory approach when he arrived at SUNY Potsdam, Perregaux is looking at his future in the same way, and letting his life and career unfold naturally. Whatever he chooses, he will build off of his leadership skills from SUNY Potsdam with the continued goal of helping others along the way.

To learn more about the Department of Business Administration, visit: https://www.potsdam.edu/academics/SOEPS/BusinessAdmin