Dr. Gregory A. Gardner has been many things to many people throughout his varied career: Military intelligence officer. Visiting professor. Business expert. Colleague. Friend.

No matter his role, he has always focused his efforts on advancing democracy and promoting free commerce—first with the U.S. Air Force, and later as a SUNY Potsdam faculty member and Fulbright Scholar. 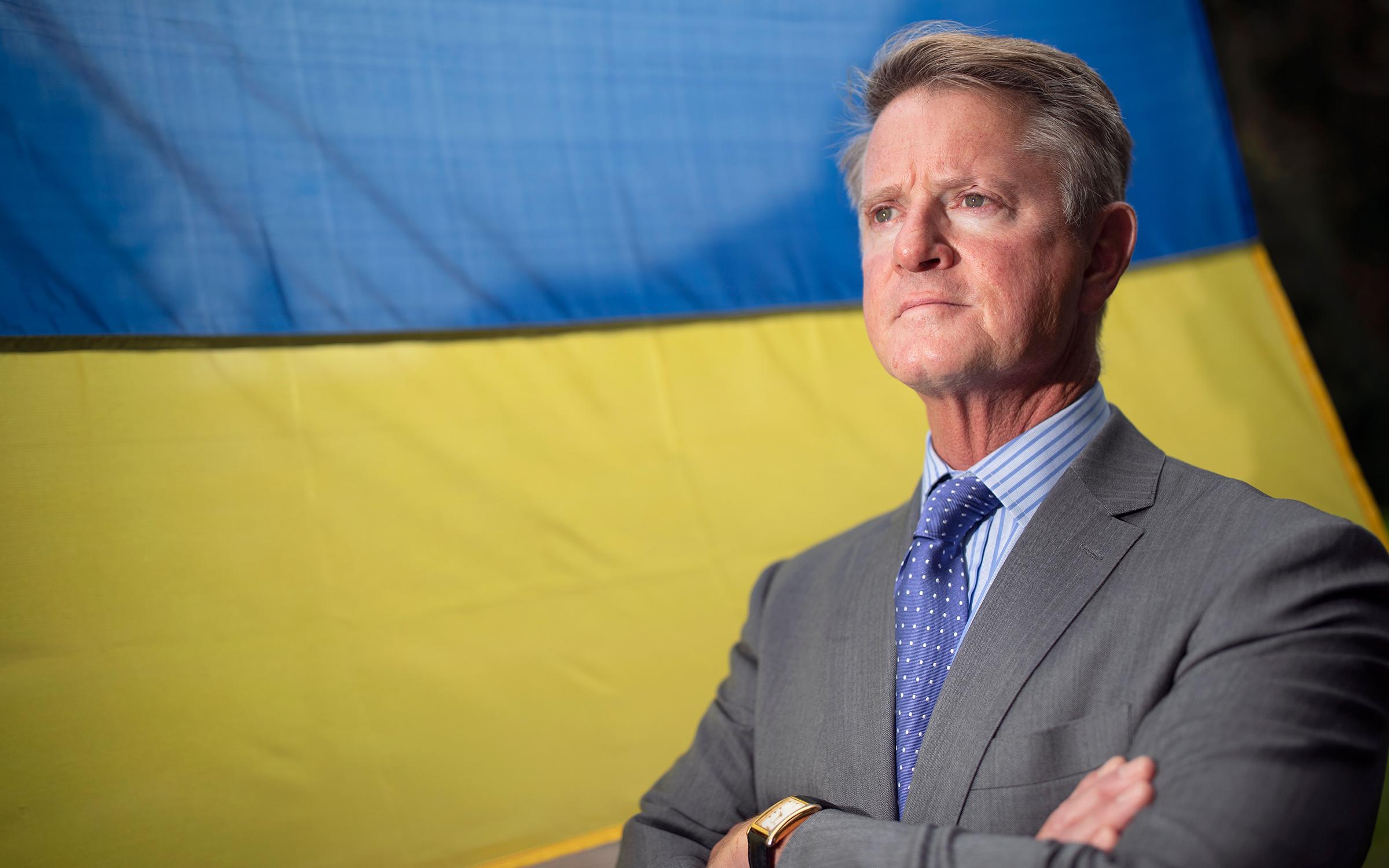 “Because of the nature of my particular career in the service, I can’t go into detail about the work that I was engaged in,” he said. “When the Berlin Wall came down and it was clear that the Soviet Union would no longer be the opponent that they had been, I felt uncertain but excited about the future—hopeful that this would be a safer world, but not exactly sure what our role would be in it.”

Now, with the outbreak of war in Ukraine, Gardner has dedicated himself to supporting his friends and contacts there in any way that he can, whether sponsoring refugees, establishing educational partnerships or advising on a future economic revival.

“When the war began, I was terrified for my friends and colleagues across Ukraine, including students who had been in my lectures and classes. I always knew they were a strong people, but they are amazingly brave,” Gardner said. “In many ways, what we’re seeing now feels very much like a return to the Cold War.”

From defense to industry to academia

The professor brings a unique vantage point and real world experience to his scholarship and his work at SUNY Potsdam. Born in Abilene, Texas, Gardner traveled the country as the son of an Air Force officer. When it came time to choose a career, entering the Air Force just “felt like the correct and natural thing to do,” he said.

While in service, he completed his bachelor’s degree in industrial technology at Southern Illinois University and a master’s degree in aeronautical science at Embry-Riddle University. Later, he completed postgraduate work in international relations at Troy State University’s European extension, while he built a successful career in international trade and logistics for an aerospace corporation. Even after entering corporate life, he continued to serve his country with ongoing stints in the Air Force and Air National Guard, finally retired as a colonel and senior director in an air operations group, responsible for overseeing all officers and non-commissioned officers in providing support for the NATO European Command.

“After I retired from the military, I had offers to work for various corporations. But pretty quickly, I was approached about getting back in the military or taking on a reserve assignment so I could contribute things that were in short supply at that time. It seemed every time I distanced myself from the Air Force, it came and found me again,” he said.

In 1994, Gardner finally bade farewell to the military for good and made the leap to higher education, joining the faculty at Jefferson Community College in Watertown, N.Y. His wife is originally from northern New York, and they had decided to move back to the area along with their son as he prepared to start school.

“I got into academia by accident,” he said. “We moved to Jefferson County and I started looking for jobs. I never thought of myself as a professor, but I got to really like it.”

At JCC, Gardner became dean of the Business Division and conducted research on workforce development, regional economic development and local business topics, having earned his Ph.D. in organizational management from Capella University. He eventually took an opportunity to join SUNY Potsdam’s faculty in the Department of Business Administration, allowing him to teach higher level courses, including some of the College’s classes offered at JCC through the Watertown extension program.

“I like my students to work on projects that come straight from the real world. I tend to avoid exams and memorization. My students do a lot of research, solve problems and integrate research in ways that give better answers than they started with,” he said.

Pretty soon, Gardner discovered his skills were still in demand back in Eastern Europe. Now a professor of business administration at SUNY Potsdam with a Ph.D. in organizational management to his name, the retired colonel found that he was a popular guest with universities in the former Eastern Bloc. It didn’t hurt that he can speak Russian and German, along with a smattering of French.

“When I first got to SUNY Potsdam, the department already had a relationship with a university in Kherson, Ukraine, and a state department grant to help create a business-related relationship. So, when I showed up, they asked if I had ever been to Ukraine and if I’d like to go again. I said, ‘Yes I have, and yes I would, but this time I can use my own name!’” Gardner said.

At the suggestion of one his new contacts, Gardner successfully applied for the Fulbright Scholar program through the U.S. State Department, presenting him with the opportunity to spend the 2007-08 academic year teaching undergraduate and graduate economics courses at Kherson State Pedagogical University. During his trip, he also helped the university establish a business incubator, modeled after New York State’s Small Business Development Centers, and advised on the creation of an origin branding strategy for the city.

After that successful educational exchange, Gardner was named a Fulbright Senior Specialist, working with more universities and advising the State Department on relevant issues in the region.

“The Fulbright office seemed to enjoy moving me around a lot. At the time, I was the only professor of business or economics assigned to Ukraine, so we received a lot of requests. It’s deeply gratifying. In a lot of cases, the universities, while they’re very polite about my lectures and so forth, they can get the same books I can get,” Gardner reflected. “What they’re often really excited about is the possibility of more immediately pragmatic, useful things we can do together—like establish entrepreneurship centers. America has a good reputation as business and economic problem solvers and people who like to get things done.”

“It was clear to me that if these people will continue to teach classes and operate their university while being fired at, we sure ought to step up and bring this project to completion and bring them whatever opportunities we could,” Gardner said. “We are determined to continue the program, to offer the opportunity to study with us. We’re not going to let this go. It’s too important to us and to them.”

In that capacity, Gardner traveled to the Kyiv International Economic University, named after Vadym Hetman (KNEU) in 2011, sparking a partnership on shared research and the development of online international business courses. KNEU even named him an honorary professor in recognition of his work there. He was back in the region four years later, this time as a Fulbright Scholar at Esterhazy Karoly Catholic University in Eger, Hungary, focused on innovation, entrepreneurship and the future of Eastern Europe. Gardner also found time to return to Ukraine, this time as a Fulbright Senior Specialist at the Zaporizhzhya Institute of Economics and Information Technology in 2015.

Back at SUNY Potsdam, Gardner began to work with his department on a dual degree program with the colleagues he had met in Kyiv, while at the same time beginning to teach graduate courses in the College’s new Master of Science degree program in management—first in person, and later online. He also continued to consult on strategic planning, marketing strategy and economic development, while teaching courses in quantitative research, mergers and acquisitions, international business and finance.

Support in the face of war

When Russia invaded Ukraine in February 2022, Gardner wasn’t exactly surprised—but he was terrified for the many colleagues and students he had befriended and taught there over the years.

“I had lots of friends and colleagues, including students who had been in my lectures and classes, whose cities were being targeted. It was and remains very difficult to find out about people and what’s going on, depending on where they are. I know some who have fled and become refugees. Many of my former male students are now serving in the armed forces, either the Ukrainian Army or territorial defense,” he said.

KNEU moved its instruction to be fully online, to support students completing degrees in exile or even on the front lines. When it came time to get final approval for a long sought dual degree program with the campus, it was an easy call, despite the war.

Gardner in front of the Grivna statue at KNEU in Kiev, Ukraine.

KNEU students, who enrolled in Gardners' online course, pose for a portrait with him in his KNEU office.

The program will eventually allow students to earn both a Bachelor of Science degree in business administration from SUNY Potsdam and a bachelor’s degree in international economics from KNEU at the same time.

At the same time, Gardner was working to help bring friends to the United States. Andriy Babych was a former government official living in Kherson, whom he had met while completing his Fulbright visit there. Babych and his family were in particular danger as the Russians closed in on the city, due to his government connections.

“Andriy went from being a well-to-do businessman with lots of resources to being a refugee basically overnight. He served under a liberal government several years ago, and we were really worried if the Russians found him that he would be a special target for persecution and interrogation,” Gardner said. “I got a group of private individuals together and we have sponsored him and his family as refugees.”

The family has now settled in Lorraine, N.Y., supported by the United for Ukraine program.

“Every one of us was at the edge of our seats with white knuckles waiting to get news of whether they were able to get out,” Gardner said. “Now, they have a new circle of friends here, and we were able to celebrate Ukrainian Independence Day together.”

He was also able to help make connections so that another colleague, Dr. Lev Vlasenko, could travel to Potsdam as a visiting lecturer in the Department of Business Administration.

“I met Lev when I was lecturing in Zaporizhzhya. He is a brilliant guy who speaks beautiful English, with very current research. We developed an online class together on Asian business, and I always had in the back of my mind that someday, we needed to get him over here,” Gardner said.

Safe in America, the friends are already thinking ahead to what they can do to help their beloved country recover.

“We check the news five or six times a day to hear the latest. But now, we are starting to think about the economic recovery after the war and what needs to happen. Right now, most people are not thinking about that yet, but it will be so important,” Gardner said. “The Air Force doesn’t need my help anymore. I’m just trying to figure out a way to be useful.”

For his students, Gardner hopes that they see in his work the importance of preparation, resilience and doing your part, no matter the circumstances.

“This kind of thing can happen to any of us at any time, where we find ourselves in a completely different and unexpected world,” Gardner said. “Don’t take anything for granted.”