Standing in front of a rambunctious group of high school students, Erica Ylitalo ’19, a music education major at SUNY Potsdam, cranks up the volume on the metronome to help synchronize the band at John C. Birdlebough High School. She waves her baton in the air, conducting her music students as they perform “Foundry,” a high energy composition being rehearsed for an upcoming concert at the school—her bubbly, charismatic personality matching the piece that she conducts.

Like all music education students at The Crane School of Music, Ylitalo spent her last semester off campus as a student teacher. She started the semester at Wellwood Middle school in Fayetteville before moving over to the high school—leading everything from band rehearsals and band lessons, to music theory classes.

To keep her students engaged, she has been incorporating games into her music theory class curriculum. “The unit we just started the other day was on cadences. A cadence is a specific set of chord progressions that indicate the end of a musical phrase. So, I made these little slips of paper and it’s going to be a relay race. They have to correctly identify the roman numerals and the cadence and then run up to me. Whoever can get them all done quickly, correctly and the fastest will win, and they’ll get a candy bar,” Ylitalo said. 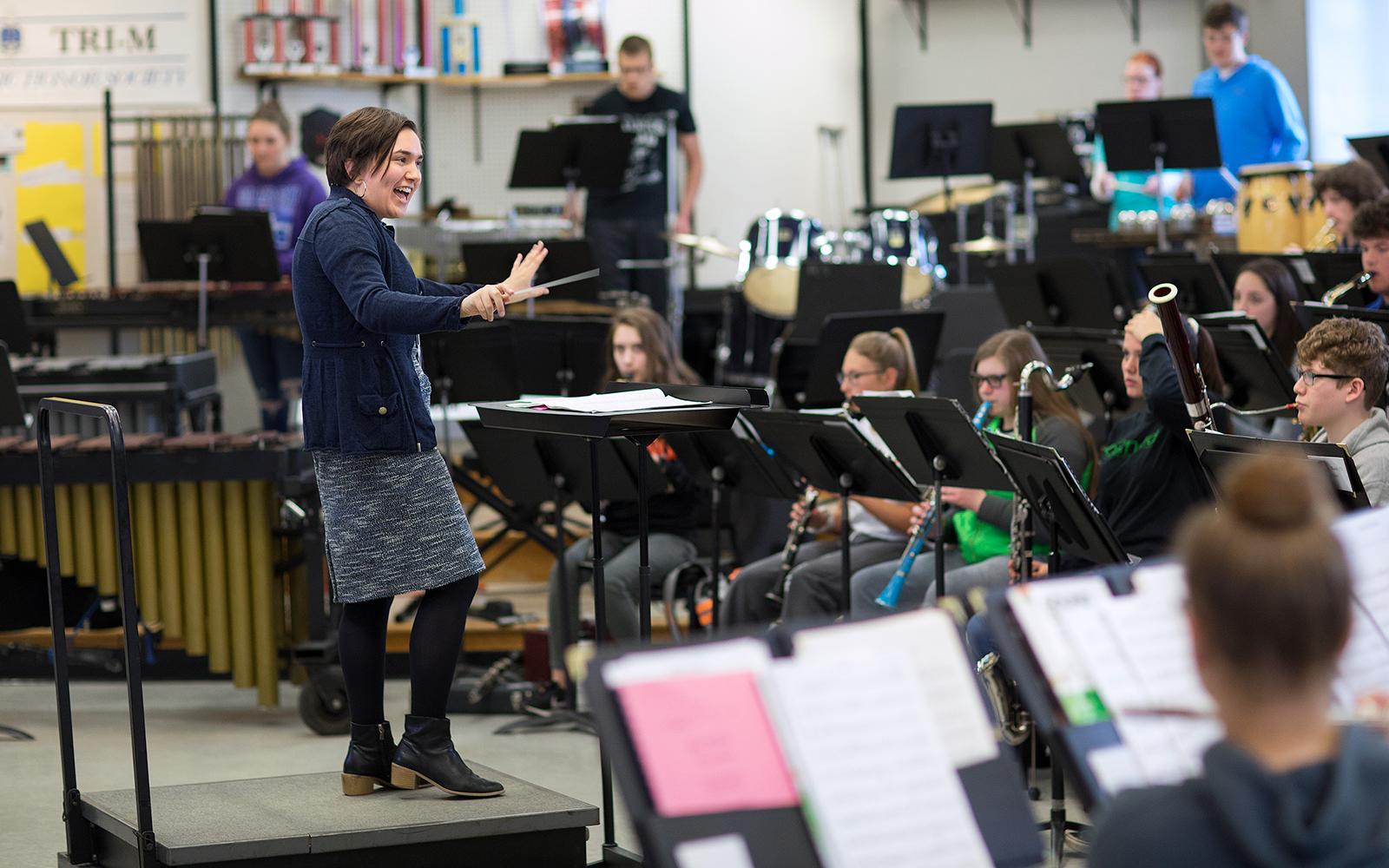 Her ability to work with both middle school and high school students has helped Ylitalo discover her career path. She is in the process of applying for jobs and recently drove down to Westchester for a position as a middle school music teacher. “My preference is middle school. I love that age group. They haven’t hit that point of feeling awkward and being self-conscious. I miss my fifth and sixth graders from Wellwood Middle School so much,” Ylitalo said.

Ylitalo realized that she wanted to be a teacher when she was the same age as the middle school students she works with now. “I distinctly remember wanting to be a teacher when I was in sixth grade. When I got to high school, I had the most amazing band teacher, Michael Cirmo ’83 from Marcellus High School, a percussionist and Crane alumnus. I was just so inspired while working with him, and it made me want to do that for other people—that’s why I wanted to become a music teacher,” she said.

Throughout her youth, Ylitalo experimented with several different instruments, taking piano lessons, learning to play the ukulele and mandolin and then making percussion her main instrument in high school. She applied to SUNY Potsdam’s Crane School of Music, entered the music education program and continued to focus on percussion. “As a percussionist at Crane, you have to be proficient on snare drum, mallet and timpani. I miss it a lot. The people were great, especially the percussion section. Dr. James Petercsak, our studio teacher, created a nice community for us. I had really bad performance anxiety going into college, and now I have almost none. It was very supportive,” she said.

With a 7:1 student-to-faculty ratio, Ylitalo benefitted from working closely with her professors at Crane. She had the opportunity to work with Dr. Brian Doyle almost every semester at Crane as a percussionist in the Wind Ensemble. “I miss being conducted by him. I think about that all the time. He’s super demanding, but his groups always sounded great because of it,” she said.

Associate Professor Jerod Sommerfeldt, who taught music theory, the first class that she took at Crane, also proved to be influential in her development as a musician. “He was absolutely amazing, such a nice guy and super inspirational as a teacher. He just cared so much about every single one of his students,” Ylitalo said.

She went on to take Sommerfeldt’s computer music class her junior year and then joined his Laptop Orchestra, a group that creates an eclectic array of electronic music. “We would be standing in a circle on our computers making sounds, but also improvising off of each other’s ideas, which you would do on any other instrument, but doing it with a computer was interesting,” she said.

Last fall, Ylitalo played percussion with the Wind Ensemble, the Crane Symphony Orchestra and the Percussion Ensemble. She also performed with the Opera Orchestra, playing percussion in the pit for the world premiere of “Mayo.” “That was a great experience! I loved working with the composer. During the final week of rehearsals, Tom Cipullo (the composer of "Mayo") poked his head in the pit and gave us real-time feedback about how we could perfect his vision. It was inspiring to see how appreciative he was of all members of the production," Ylitalo recalled.

Between her experiences as a percussionist at Crane to her hands-on student teaching opportunities this semester, Ylitalo is ready for a career as a music educator.

For more information about The Crane School of Music, visit: www.potsdam.edu/academics/crane-school-music.