After sustaining a season-ending ankle injury his sophomore year, followed by a serious concussion his junior year, Adam Kelley ’20 faced a potential future without soccer—the sport that he had loved and excelled at since his youth.

Kelley had hoped that he would be able to lace up his cleats once again and join his teammates back on SUNY Potsdam’s turf field after the concussion, but the doctors told him it was too risky after already sustaining several head injuries in the past. Despite the devastating news, Kelley rose out of the darkness, and what could have been the end of his involvement with soccer forever, turned out to be a completely new beginning.

“I never thought that the game that I played my whole life would be taken from me. That’s when Adam Parker [the Potsdam Bears’ head soccer coach] offered me a volunteer assistant role to get more experience in coaching. I have always had some type of leadership or captain role on teams that I played for, and I developed my voice that way, so it was an easy transition as I communicated with the guys on the team,” Kelley said.

Although his final two years at SUNY Potsdam looked different than he had imagined, the opportunity to be a coach for his team, coupled with the skills he was acquiring in the Department of Business Administration, proved to be a recipe for success. Right after graduating with his degree in business administration, he landed a job with the Bulfinch group, a wealth management company out of Boston. After working remotely for the first year, he was preparing to move to the city for an in-person role with the organization when he got a call from Clarkson University’s head soccer coach offering a job.

“I was talking with my parents about how I wasn’t sure if wealth management was for me, and the next day I got a call from Carter Lincoln offering me a position as an assistant coach. Everything happens for a reason,” Kelley said.

Encouraged by his family, Kelley jumped at the unique opportunity to remain in the North Country and become a division III soccer coach. As a bonus, the job has allowed him to pursue an MBA at the college tuition-free. Now one year into his new role, he’s expanding his knowledge under the leadership of Clarkson head coach Carter Lincoln. “As a mentor, Carter has been great. I’ve learned so much more about the game that I didn’t even realize. And as a friend, it’s awesome having a head coach who’s so close to my age, who I feel like I can connect with. It feels like I’m just talking with one of my buddies, where I’m not hesitant to ask questions, and he’s always trying to get me involved with designing or running the sessions,” Kelley said.

“Soccer has given me a lot in life. I’d love to continue to pass on everything I’ve learned to other kids and help change their lives, and help mentor them as other coaches have done for me.”

From the tactical analysis of their opponents to recruiting prospective student-athletes to the program, Kelley has embraced his multifaceted role—which this time of year focuses on outreach and recruitment. This summer he has traveled to Cornell, Colgate, and the University of New Hampshire to work as a coach at summer camps, and lead in-person recruiting efforts for the college. “The focus of these camps is to provide high school students with the opportunity to play in front of college coaches, and hopefully begin talks to be recruited at the next level. I really like recruiting and developing relationships with players,” he said.

Kelley attended similar camps in his youth as he fueled his own passion for the game. At Lisbon Central School he was the league MVP three years running, and the captain of his high school team over that same period. “I’ve been playing soccer my whole life. I played for, who I think is one of the best college coaches ever at the division three level, Bob Durocher, who coached at St. Lawrence University for many years and won a national championship in 1998. He taught me everything about soccer and really helped me in the college recruiting process. He was my mentor,” he said. 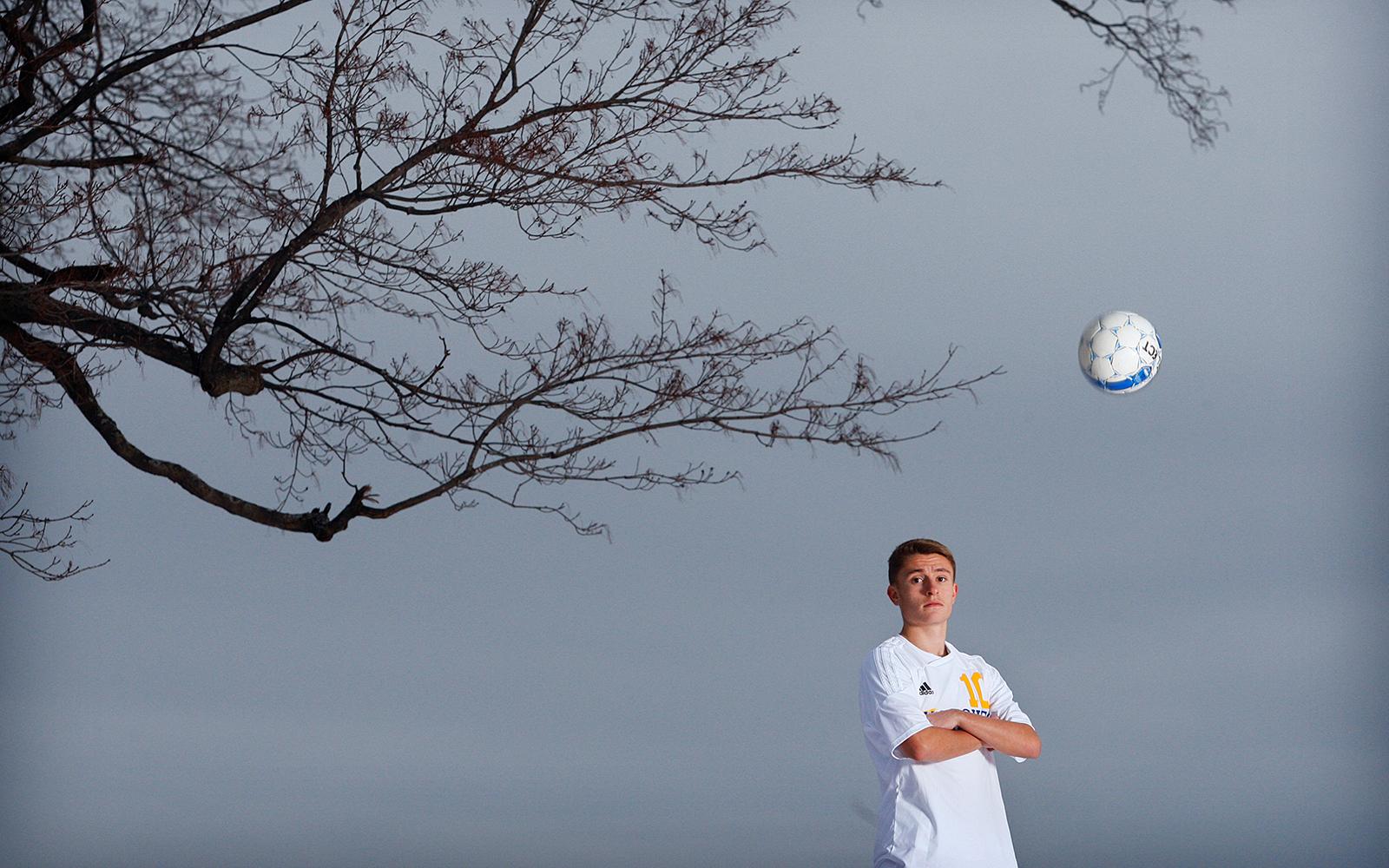 Kelley poses for a portrait outside Lisbon High School during his sophomore year of high school.

As Kelley oversees soccer camps today, working with young players who are looking to continue their soccer careers after high school, he takes a holistic approach to evaluating their skill set. At the division three level, Kelley said that academics are always first. “We don’t want to bring in someone that we know is going to struggle academically, even if they’re a very good soccer player. We don’t want to set them up for failure, we’re there to help them succeed,” he said.

Inside the classroom, Kelley is halfway through the MBA program at Clarkson, and building on his strong foundation from SUNY Potsdam. As he reflects on his time at Potsdam, one professor continues to stand out in his mind. “We weren’t sitting down and being lectured to in Dr. Edwin Portugal’s classes. Every day it was so hands-on, and that’s the way that I prefer to learn,” Kelley recalled. “A lot of my grad classes have been structured that way, where you’re working on a larger project for the entire semester, typically in a group format, so it was an easy transition.”

His connection to SUNY Potsdam dates back long before he enrolled as a student. His mother, Katherine Kelley, has worked for the college for the past 18 years, his brother Brandon ’11 and sister Tessa ’13 both received degrees in business administration, and Brandon also played on the same men’s soccer team a decade earlier. “Even though I was 30 minutes from home, I felt like I was still getting the full college experience at SUNY Potsdam. I was at my soccer goalie’s wedding two weekends ago. I met some of my closest friends there, whom I will probably be friends with for the rest of my life,” he said.

As he enters his second year as an assistant coach, he has his sights set on one day becoming a head coach for a college soccer program and being a leader for the next generation. “Soccer has given me a lot in life,” Kelley said. “I’d love to continue to pass on everything I’ve learned to other kids and help change their lives, and help mentor them as other coaches have done for me.”